A.H. Baldwin & Sons Ltd, one of the largest and longest established Numismatic dealers and auction houses, have delved into their Basement at Adelphi Terrace to offer a treasured collection of 18th Century Tokens. Auction 92 will be the first in a series of annual sales offering collectors a unique opportunity to purchase tokens that have remained hidden from the public for over a half-a-century. The auction will be held at the CIPFA conference centre in central London on Tuesday 30th September.

Seth Freeman, Director and Token specialist at A.H. Baldwin & Sons Ltd said,“Some of the greatest collections of the last century have come together in our basement to form one of the largest and most complete collection of tokens in the world. We have been the privileged custodians and are now pleased to offer both new and established generations of collectors, an unrivaled snapshot of 18th Century Britain from the view of the everyday man.”

Throughout British history there have been periods when the government has been unwilling or unable to provide good ‘small coinage’. This resulted in the production of tokens, mostly by merchants, as a way to trade and barter in the immediate locality and to pay their employees. The Industrial revolution and a drastic growth in population during the 18th century led to the production of tokens becoming more important than ever before and saw their use spread further across the land.

For this reason tokens, which were designed and produced outside the confines of the government, were used for more than just commercial purposes. Tokens were produced as advertising pieces, for propaganda, promotion and to highlight political, social and welfare issues for and against the government.

Revolutionaries, like Thomas Spence and Thomas Paine, were able to freely express their social and political philosophies on a medium that would be widely distributed amongst the public. Whilst Thomas Paine circulated his radical ideas to the common man through his writing and pamphlets, Thomas Spence also distributed his utopian views in solid metal. Spence was a bookseller and political activist who moved to London in 1792. In London he became the primary issuer of monetary propaganda bursting with political imagery against injustice and oppression.

As a bookseller Spence promoted Paine’s work. The Rights of Man, 1791 and Paine’s other political works were available to buy in Spence’s London shop and he reflected Paine’s political messages in his tokens. The reverse of one token in the sale lists Spence as the primary advocate for The Rights of Man; “THOS. SPENCE Sir THOS. MORE THOS. PAINE, NOTED ADVOCATES FOR THE RIGHTS OF MAN”. The obverse of the token has a grotesque head with the crying face of Prime Minister William Pitt, the younger, conjoined with his political rival a laughing Charles James Fox. [Lot 828, est. £80-120]

Similar to Paine, Spence was imprisoned on three separate occasions, including a spell in Newgate Prison during 1794. A copper halfpenny, the reverse showing four men dancing below ‘THE TREE OF LIBERTY’, shows the threat monetary propaganda posed to the government. Although an implicit message, the traditional Liberty Cap on the pole has clearly been replaced the head of Prime Minster William Pitt the younger. The obverse shows a satirical motif, the conjoined heads of King George III and a donkey. [Lot 827, est. £100-150]

Amongst Spence’s other monetary propaganda in the sale, is a halfpenny bearing the bust of politician Horne Tooke on one side, and Old Bailey upon the other. It was struck in white metal on a large planchet and clipped to ten sides. [Lot 859, est. £400-500]

Another example is a silver Farthing, with the reverse showing a pig trampling on emblems of royalty, advertising Spence’s weekly publication Pig’s Meat. [Lot 882, est. £300-400]

As a result of their literary and artistic candor, radicals like Spence and Paine found themselves targeted in the same medium they were using to fight oppression. A copper halfpenny issued by Skidmore is a particularly visual example that attacks both Paine and Spence. On the obverse a man hangs from a gibbet below “END OF PAIN”, a play on Spence’s “THE END OF OPPRESSION” motif that appears on a number of Spence’s tokens in the sale. [Lot 836 est. £100-150] 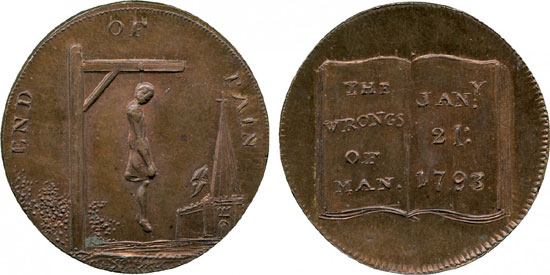 The diversity and popularity of tokens during the 18th Century opened a new field of collecting, with many tokens manufactured specifically for the collector. In response to this growing demand, manufactures created a wide variety of medley tokens, made by combining dies not originally intended to go together, to increase their output of tokens for the collectors market.

Prolific token maker Skidmore accounted for nearly a quarter of all tokens varieties produced in the late 18th Century. A unique example of a medley token in the sale, originating in Skidmore’s manufactory uses the obverse die for a William Cooper Halfpenny and the reverse showing an impression of a Parys Mine Company Druid. [Lot 581, est. £300-400]

One of the many tokens in the sale that once formed part of the celebrated F S Cokayne Collection is Robert Orchard’s Sawbridgeworth Penny. Cokayne began collecting coins with his brother in the late 1880s and was one of many that began to collect these tokens contemporaneously. He traded with notable collectors of the period and participated in every public token auction in the UK for over 50 years. It was a standing rule at Baldwin’s that staff could not leave on Friday until a new parcel of tokens was posted to Mr Cokayne’s offices on Montagu Square. One of only five known examples, Baldwin’s purchased this token on Cokayne’s behalf in 1930 for £31, it is now estimated at £8,000-10,000. [Lot 83] 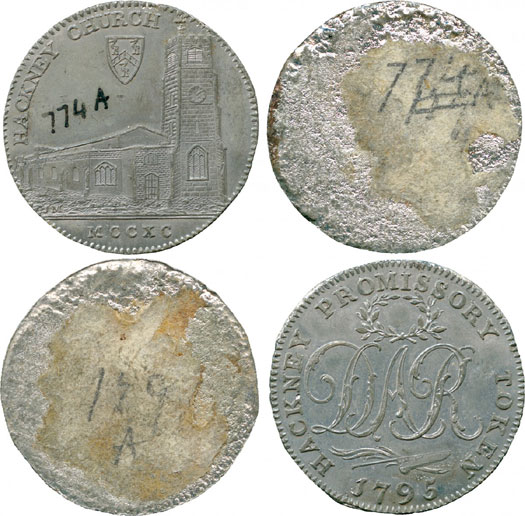 Elsewhere in the sale, John Milton’s ‘die trials’ of the reverse and obverse for David Rebello’s ‘Hackney Promissory Token’ offer a unique glimpse into the artistic talent of the engravers. Milton was an assistant medallist at the Royal Mint and his dies are widely regarded as works of art.  [Lot 254, est. £1,500-2,000]

The sale will be held on Tuesday 30th September 2014 at the CIPFA conference centre in London. The catalog is available to view online at www.baldwin.co.uk.