The government and treasury of Tokelau have released the latest collector coin in the distinctive shape of a royal star which is part of the ongoing series of the same name and in salute to Tokelau’s head of state, Queen Elizabeth II. The new coin focuses on a speech delivered at the height of the conflict in Europe and by a member of the British Royal family who may have been perhaps the most unlikely person to inspire courage and resilience. No one then could have known that the words spoken by a teenage girl would be remembered 80 years later as the inspiring and morale-boosting speech it ultimately became. Though just 14 at the time, the future Queen Elizabeth II demonstrated her abilities of leadership with self-confidence during her first public speech which was made on the 13th October 1940. The speech was the suggestion of the then Prime Minister Winston Churchill, who had hoped to boost the spirits of the country’s children and their parents at the height of the war and during the infamous Battle of Britain. Delivered during the BBC’s Children’s Hour radio show, Princess Elizabeth’s speech, which was just over three minutes, was a heartfelt address to the children of Great Britain, many of whom were forced to live away from home due to the war with Nazi Germany. Listeners were able to hear the young princess speak in Australia, New Zealand, Canada, South Africa, and in the United States where British children were evacuated to and experienced similar deprivations. From Windsor Castle, she delivered a flawless performance, touching the hearts of millions around the globe. During that time, she even encouraged her younger sister Princess Margaret to bid a good night to her audience. Ultimately, the speech was to become an auspicious beginning to the public life of a woman who would become Britain’s longest-reigning monarch and beloved symbol of dedication and constancy in a world of ever-changing events. More recently, and during unprecedented times, the Queen delivered her fifth-ever speech to the nation and Commonwealth in April this year when she spoke of the difficult times now and ahead as the world experiences a pandemic. Her words struck a chord of war-time resilience when the Queen commented: 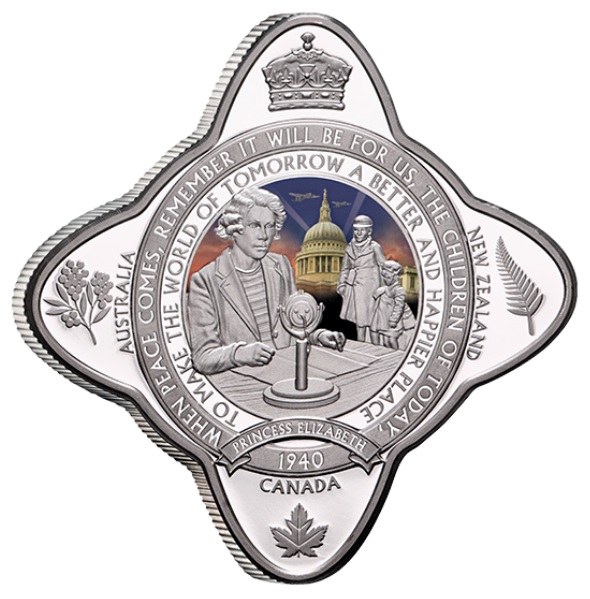 The reverse side of the coin depicts the then 14-year-old Princess Elizabeth and her first public speech in 1940, during the Battle of Britain. The design is complemented by a full-colour backdrop of St. Paul’s Cathedral. To the right of the princess are two standing children awaiting evacuation. Encircling the primary design in two separate lines around are the inscriptions WHEN PEACE COMES, REMEMBER IT WILL BE FOR US, THE CHILDREN OF TODAY, – TO MAKE THE WORLD OF TOMORROW A BETTER AND HAPPY PLACE one of the more outstanding quotes from her flawless speech. Below the design is the text PRINCESS ELIZABETH and the year 1940. Emblems and text representing CANADA, AUSTRALIA, and NEW ZEALAND and includes a maple leaf, a sprig of golden wattle, and a silver fern. At the top is the coronet representing the status of the princess as heir presumptive. 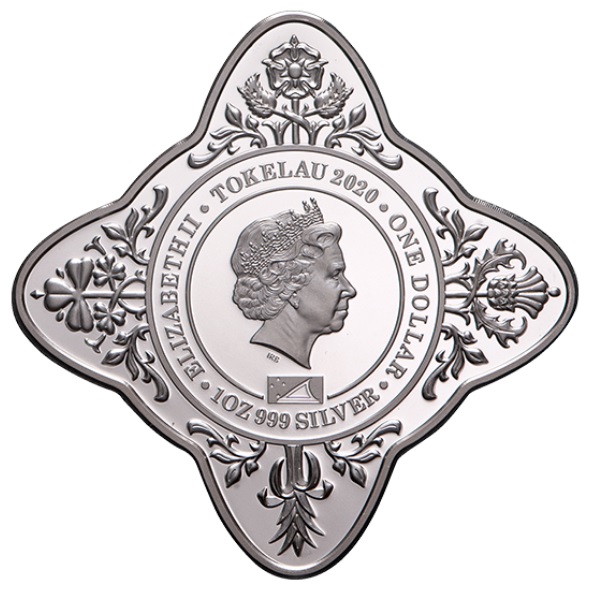 The obverse of the coin features the Rank-Broadley effigy of Her Majesty Queen Elizabeth II surrounded by beautiful decorations representing England, Scotland, Ireland, and Wales — namely the Tudor Rose, the thistle, the shamrock, and the leek. The inscriptions ELIZABETH II – TOKELAU 2020 and ONE DOLLAR surrounds the Queen’s likeness with the coin’s weight and fineness 1OZ 999 SILVER placed beneath. 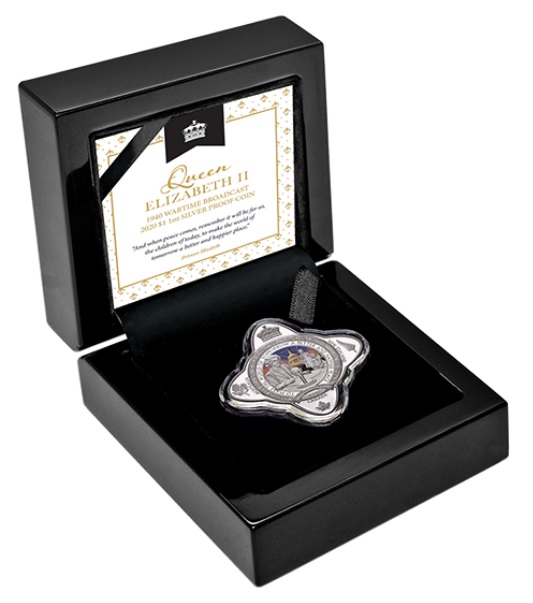 Each coin is encapsulated and presented in a custom prestige case with a numbered certificate of authenticity. The coin is available from the Royal Canadian Mint by visiting here.