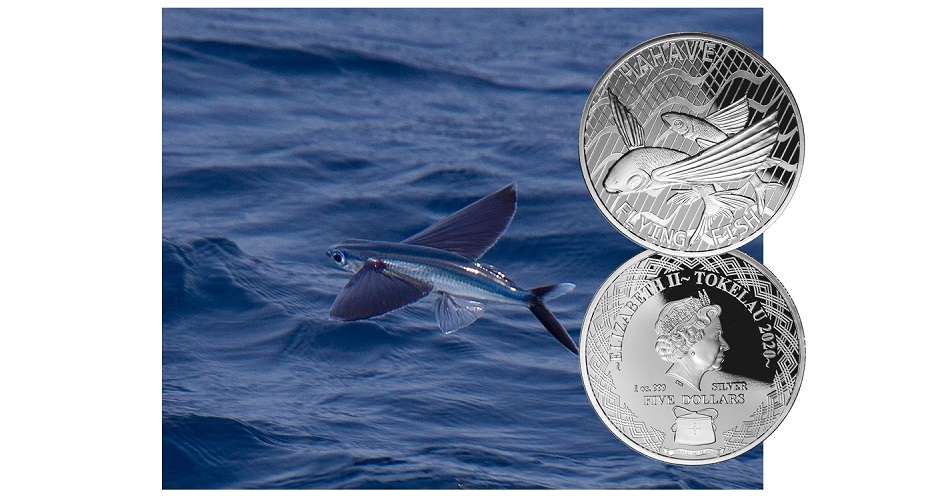 The government of Tokelau has authorised the release of new 2020-dated silver one-ounce coins which are part of an overall 12-coin series entitled “Tokelau Sealife” and features various species that live near this South Pacific Island. The seventh coin released features one of the most interesting fish which can be seen jumping out of warm ocean water worldwide: The aptly named flying fish.

Although flying fish (or Exocoetidae) cannot actually fly in the same manner as birds; they have a remarkable ability to glide through the air. Their wing-like highly modified long pectoral fins enable them to leap out of the ocean and hover over the water’s surface for substantial distances. Two-winged flying fish have unevenly forked tails with enormous pectoral fins that they stretch out to fly in the air and fold their wings while swimming. Together with their streamlined torpedo shape, flying fish use their ability to glide as a means of escaping predators in the water — of which there are many. When flying fish are in danger, they build up speed about 35 miles per hour underwater and propel themselves by wiggling their tails and holding their fins close to their body. They then spread their wings and leap into the air, gliding for around 45 seconds and remarkably can glide at double the speed they swim. While out at sea, it is not unusual for sailors to find them on the decks of ships. About 64 species of flying fish are known and grouped in seven to nine genera. 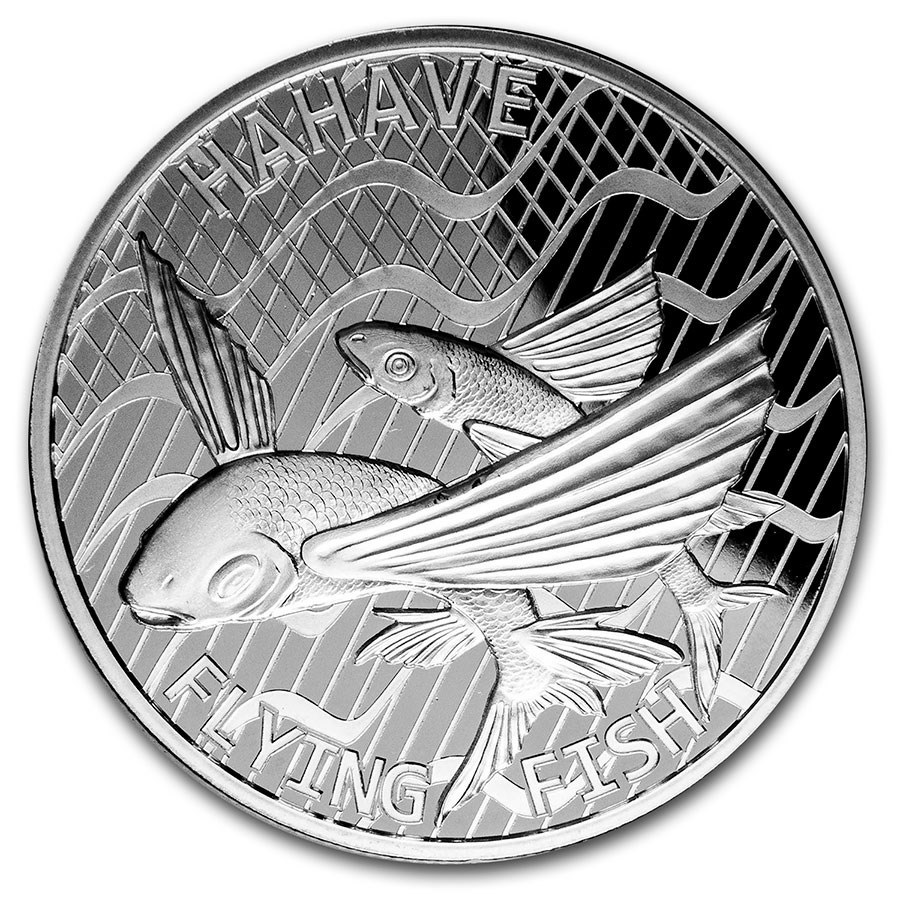 The coins are produced by the New Zealand Mint at their facilities in Auckland, on behalf of the government of Tokelau. The reverse side shows two flying fish leaping out of the water, one in the foreground, and the second one a little smaller in the background. The coin’s design includes graphics in the background representing the water in the ocean. Above the primary design along the edge is the text HAHAVE, which is the local word for the flying fish. The additional text FLYING FISH is placed below the design along the edge. 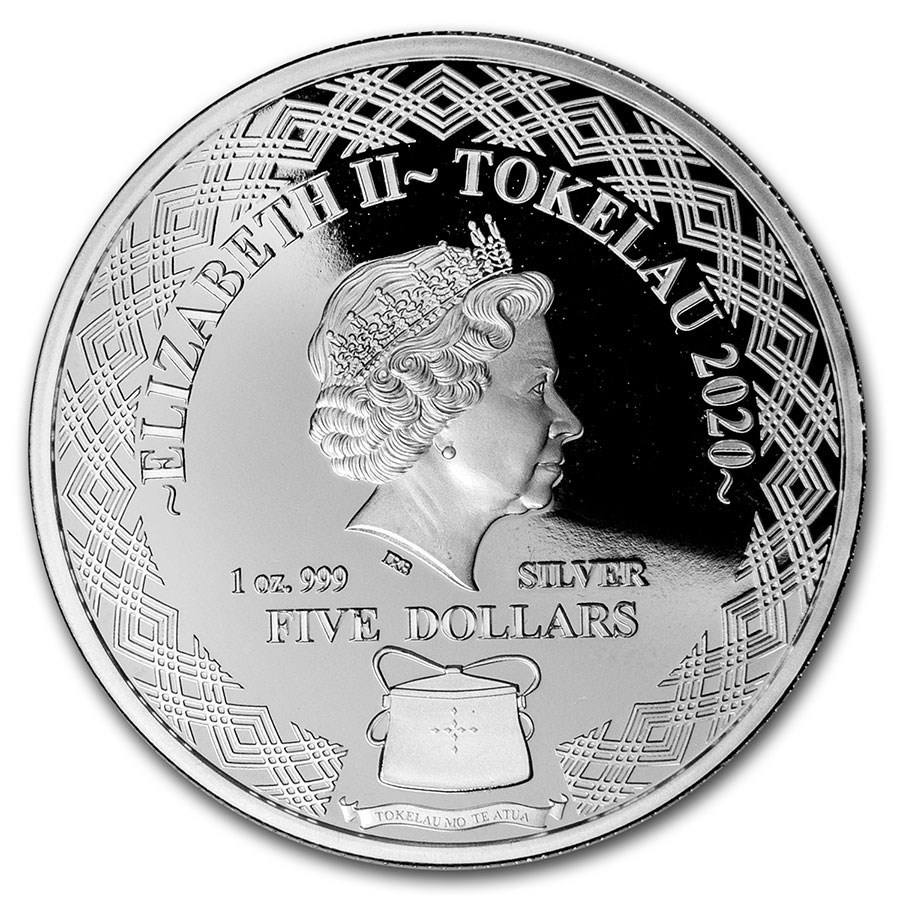 The obverse side includes an effigy of HM Queen Elizabeth II created by British sculptor Ian Rank-Broadley. Above the Queen’s likeness is the text ELIZABETH II ~ TOKELAU and below her likeness is the year of issue, along with the specifications of the coin, 1OZ .999 SILVER, and the coin’s denomination of FIVE DOLLARS. Also below the Queen’s effigy is a tuluma, a wooden tackle box used by local fishermen and which is the national symbol of Tokelau. It inscribed with TOKELAU MOT E ATUA, meaning “Tokelau for God,” referencing the island’s adherence to Christianity.

The Flying Fish is the subject of the seventh release of a 12-coin series, previous designs and wildlife included the Yellowfin Tuna, 2014; the Great White Shark, 2015; the Sailfish, 2016; the Barracuda, 2017; the Leopard Shark, 2018; and the Loggerhead turtle in 2019. Each encapsulated coin is available as a single coin or in quantities of up to 500 pieces from APMEX. 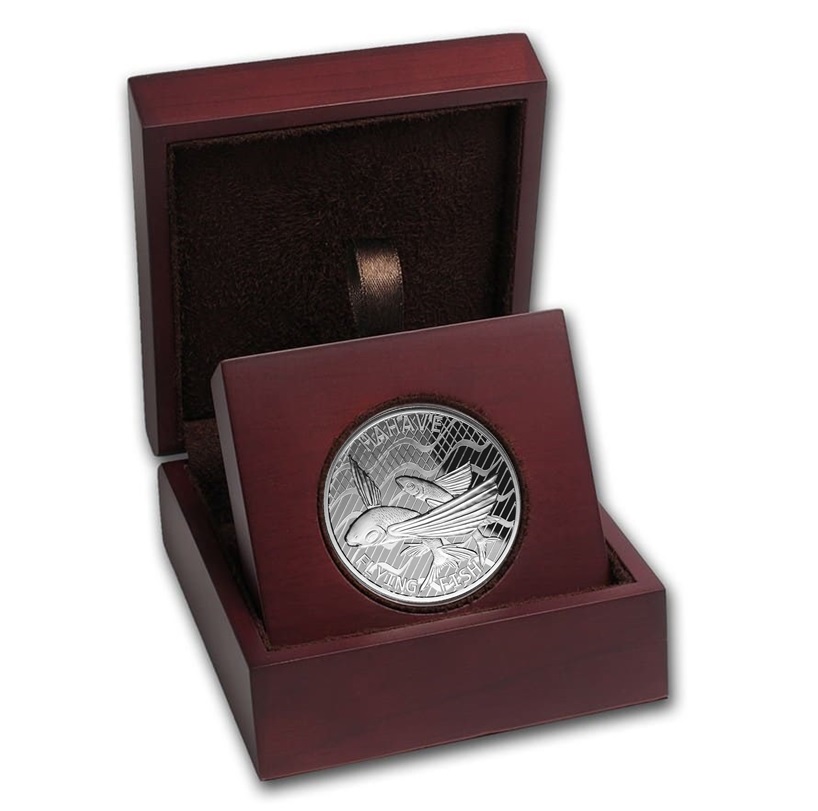