On December 3, 2009, the United States Mint will release the 2009 Proof American Platinum Eagle. The reverse design of the one ounce .9995 platinum coin will feature the first of six different designs to commemorate the core concepts of American Democracy. 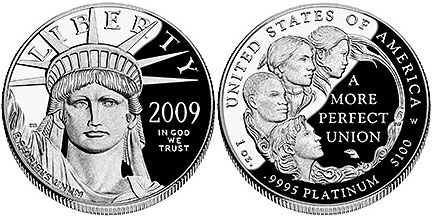 The collectible version of the Platinum Eagle has carried a different reverse design for each year of issue. This has included two previous multi-year design programs. The “Vistas of Liberty” program, which ran from 1998 to 2002, featured depictions of the Bald Eagle in different regions of the United States. The “Foundations of Democracy” program, which ran from 2006 to 2008, featured designs representing the three branches of government.

The current program will run from 2009 to 2014 and represent the core concepts of American democracy through representations of the six principles of the Preamble of the United States Constitution. This will include:  To Form a More Perfect Union (2009), To Establish Justice (2010), To Insure Domestic Tranquility (2011), To Provide for the Common Defense (2012), To Promote General Welfare (2013), and To Secure the Blessings of Liberty to Ourselves and our Posterity (2014). Themes for each of the reverse designs are inspired by narratives prepared by Chief Justice of the United States, John G. Roberts, Jr., at the request of the US Mint.

The Chief Justice’s first narrative is presented below. This narrative inspired the reverse design of the 2009 Proof Platinum Eagle, which features four faces representing the diversity of the Nation, with hair and clothing intertwined to symbolize the principle “To Form a More Perfect Union.”

When the thirteen American colonies issued their Declaration of Independence from Great Britain in 1776, they recognized that the success of the American Revolution depended on unity in opposition to British rule. As the Revolutionary War progressed, those thirteen fledgling entities agreed, through “Articles of Confederation and Perpetual Union,” to establish the United States of America. The Articles of Confederation proved inadequate, however, in creating an effective national government. After the Revolutionary War, the states convened a constitutional convention in Philadelphia to reconsider the terms of their confederation. During that fateful summer of 1787, America’s leading statesmen drafted the Constitution of the United States of America with the avowed objective “to form a more perfect Union.”

John Jay, who would later become the first Chief Justice of the United States, joined James Madison and Alexander Hamilton in authoring a series of essays, now known as The Federalist Papers, to urge the citizens to support ratification of the Constitution. In The Federalist No.2, Jay explained that the Constitution’s promise of “a more perfect Union” rested upon a unity of distinctly American ideals, interests, and experiences that joined the people of the United States together as one nation.

Jay noted that “independent America was not composed of detached and distant territories,” but rather was “one connected, fertile, widespreading country” with “a variety of soils,” “innumerable streams,” and a “succession of navigable waters” that “forms a kind of chain round its borders as if to bind it together.” Jay also recognized that “Providence has been pleased to give this one connected country to one united people” who, “by their joint counsels, arms, and efforts, fighting side by side throughout a long and bloody war, have nobly established their general liberty and independence.” He discerned a connection between the land and the people:

This country and this people seem to have been made for each other, and it appears as if it was the design of Providence that an inheritance so proper and convenient for a band of brethren, united to each other by the strongest ties, should never be split into a number of unsocial, jealous, and alien sovereignties.

John Jay believed that this “band of brethren” found unity in the English ancestry, heritage, and customs that many of the citizens of his era shared. But history has shown that the Constitution’s aspiration of “a more perfect Union” rests more fundamentally on a unity of common beliefs that Americans of all backgrounds throughout history have embraced. As the United States has expanded across the continent, overcome internal conflict, and welcomed new states, the nation has found enduring strength in its people’s diverse origins and perspectives. The United States remains perpetually united by a shared dedication to the ideals of liberty, justice, and equality. Through those shared ideals, each new generation has sustained the Constitution’s promise of “a more perfect Union.”