On September 2 the U.S. Mint once again suspended sales of some gold and silver coins because of rising metal prices. This is the third recent time this has happened for gold products and the fourth for silver products (http://mintnewsblog.com/2011/09/gold-and-silver-numismatic-products-suspended-yet-again/).

Labor day weekend is a traditional sale period for most businesses, and presumably many coin collectors had planned to purchase coins such as the Lucy Hayes first spouse $10 gold coin that was released the day before the long weekend. 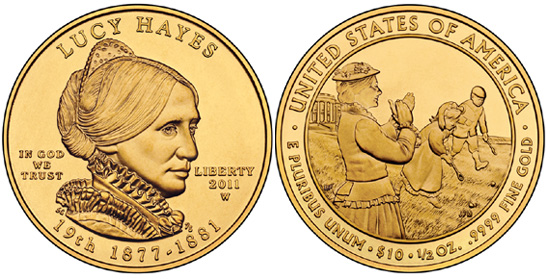 All gold coins except the $5 commemoratives, which had recently been repriced at new levels, were pulled from sale. Most silver products remained for sale except for the 2010 silver proof sets and silver quarter proof sets, and the 2011 silver sets were removed from the bulk sales program for eligible coin dealers.

This action may have been the proverbial straw that broke the camel’s back for Mint buyers. Many buyers were annoyed by the Mint’s actions, particularly since this has happened so many times in such a short time fame. Most people understand that rising metal prices mean coins need to be repriced.  In addition, it is true that the Mint has always reserved the right to suspend sales before Wednesday, when gold coins are normally repriced, in the event metal prices are so volatile that the melt value of coins begins to approach the retail price for which they are being sold.

But surely the largest coin dealer in the world can come up with a better system than this. Business thrives on predictability, and buyers had become accustomed to the Wednesday repricing that follows a complex grid based primarily on the average price of gold during the preceding week. It is just not clear how much metal prices have to increase before sales are suspended in advance of the normal weekly repricing, and this uncertainty is harming the Mint’s sales.

Moreover, when there is a sharp drop in prices, as happened a couple of weeks ago, the Mint did not suspend sales to lower prices.

Mint officials should recognize that, as I wrote recently (http://news.coinupdate.com/golds-rally-is-far-from-over/), the current bull market in gold is resulting in an increase in the degree of volatility of prices. Moves of $50-100 a day are becoming the norm and are likely to continue to be as prices rise further. In fact, the gold VIX, which is a measure of gold investors’ perceptions of the volatility of the gold market, has risen greatly in recent weeks, as gold as hit one new nominal high after another. So a more flexible system urgently needs to be implemented.

I know that depending on the product and the metal there are different requirements. For example, price changes for silver coins and sets and gold commemoratives are supposed to be announced in the Federal Register, which means a delay so that the official notice can be prepared and published. Other gold and platinum coins are normally repriced one a week using the grid.

But whether the action can be done on its own authority, or in consultation with congressional officials as necessary, it is high time the Mint moves towards something similar to the real-time pricing system used by bullion dealers. This would be the best and fairest system for buyer and seller alike.

Would it not be possible to determine some sort of defined premium level for different coins that covers production costs, other overhead, surcharges, profit margin, etc., and then adjust prices as metal values increase or decrease day-to-day? This way collectors won’t have to constantly deal with sales suspensions and weekly repricing, and the Mint will not lose millions of dollars of business during the periods when coins are not available for sale.

I welcome any thoughts that readers may have in this area. I know from my own experience that it can be frustrating to deal with the current system since I was planning on buying a coin on September 2 just as sales were suspended. It is, of course, not exactly the end of the world to have to wait until the following Wednesday, but by that time I will most likely have convinced myself that prices will come down later, and I would be better off waiting for a price break some time down the road. I may even talk myself out of buying because my budget is as strained as that of other collectors.

I accept that metal prices change quickly, and the Mint should not be forced to break even or lose money. But there has to be a better way, and the Mint has the resources to create something that would work better. It would also behoove Mint officials to finally implement the long-awaited improvements to its web ordering system in advance of the much-anticipated October release of the 25th anniversary silver eagle set. A major web site crash on that day would really upset a lot of buyers, as would any incorrectly canceled orders.

I am currently researching how some other world mints deal with volatile metal prices and will be reporting in the future on the practices followed by officials in those countries.

Finally, I also think the Mint needs to re-examine the premiums it charges on its collectible precious metal products.  Some coins are priced quite competitively but others carry premiums over melt value that run rather high at times.

As coins like the first spouse issues become ever more expensive because of rising gold prices, it would be helpful if the Mint could find a way to bring the cost down to a more reasonable level. For example, perhaps the fancy boxes could be replaced with the ones used for gold eagles and commemoratives, or buyers could be given the option of purchasing the coin in a capsule, as Coin World editor Beth Deisher suggested at a congressional hearing earlier this year.

Louis Golino is a coin collector and numismatic writer.  His articles have been published in Coin World, Numismatic News, and other publications. He also writes a regular column called “The Coin Analyst” for www.CoinWeek.com about U.S. and world coins and precious metals and has written widely about international politics for newspapers and web sites.