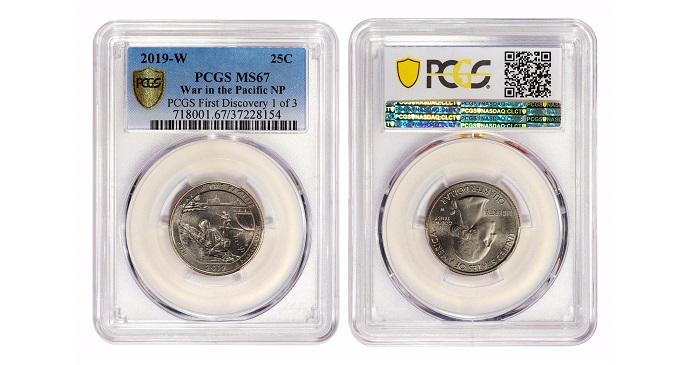 June 17, 2019 — The thrill of the hunt and the happiness of rewards continue with three more lucky coin finders in the Professional Coin Grading Service (PCGS) Quarter Quest.

The latest three bounty winners, one each from Georgia, Kentucky, and Utah, were the first to discover and submit to PCGS for authentication and grading examples of the new 2019-W War in the Pacific National Historical Park quarters. One of the coins is now graded PCGS MS-67.

Each of the three lucky submitters will receive $667 from PCGS.

As with the previous America the Beautiful series design quarters released this year, the United States Mint has struck only two million West Point mint mark examples of the War in the Pacific National Historic Park coins, also known as the Guam quarters, for the western Pacific Ocean territory where the park is located.

As part of the ongoing PCGS Quarter Quest, a $2,000 reward was offered for the first West Point Guam coin submitted. Three people whose submissions arrived virtually simultaneously will split the prize and are receiving their now PCGS-certified coins with a special insert label: PCGS First Discovery.

“The Quarter Quest continues to drive excitement for collecting and has brought the hunt back to the hobby. The fact that these quarters came from such a spread of states shows that anyone is capable of finding them. We are excited to see what happens with the release of the San Antonio Missions West Point Mint quarter in August,” said PCGS President Brett Charville. 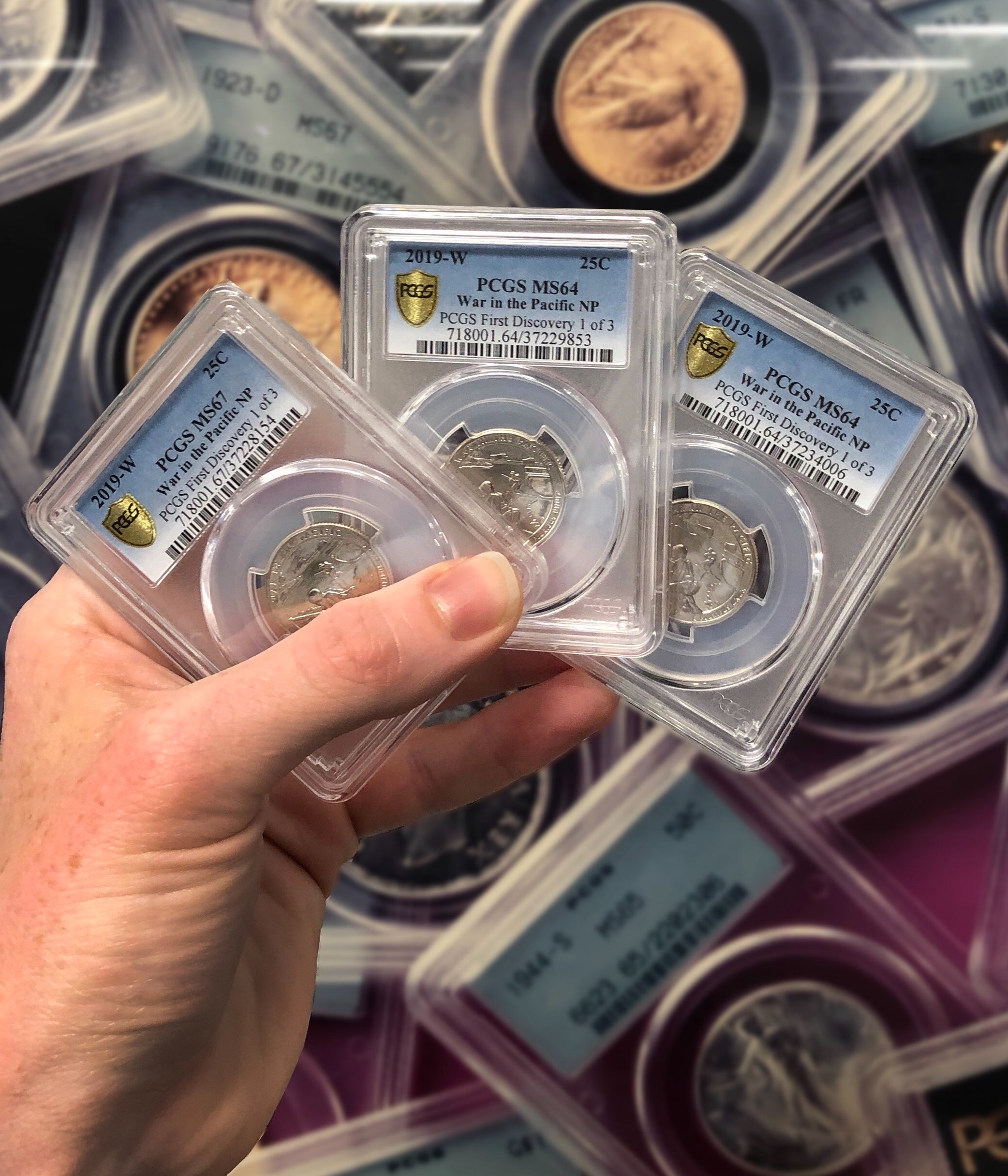 The three latest winners explained how they found their 2019-W Gaum quarters.

“Ana” from Utah went to a Salt Lake City credit union with several colleagues from work and each purchased two rolls of quarters, the maximum allowed per person. After finding a West Point Guam coin, she immediately went to the post office and submitted it to PCGS by overnight delivery. Her coin is graded PCGS MS-64.

“Pamela H” of Georgia is a cashier who has collected coins for more than a decade and started purchasing boxes of quarters when the “W” mint mark program was announced. “I was shocked (when I found the coin in Acworth, Georgia). It was like hitting the jackpot,” she told PCGS. Her coin is graded PCGS MS-67!

“Fernando A” of Kentucky,” who began collecting silver coins from subway fare as a youngster in Queens, New York, purchased a box of quarters from a Chase bank in Radcliff, Kentucky. He had only about 20 minutes from the time he found the “W” mint mark Guam quarter before the post office closed for the day, but he beat the clock. He has a special fondness for the War in the Pacific/Guam quarter. “As a veteran, it is something special to have been one of the winners for the Guam quarter bounty. The design resonates with me, I will definitely be keeping this coin,” he stated. His quarter is graded PCGS MS-64.

The PCGS Quarter Quest continues with still two additional coin designs scheduled by the Mint this year. Any qualifying 2019 West Point mint mark quarters received within the first seven days after the PCGS First Discovery for each design has been confirmed will automatically receive the First Week of Discovery pedigree.

The qualifying coins submitted after those 7 days and within 45 days of the PCGS First Discovery will automatically receive an Early Find pedigree. Also, there are opportunities for bonus points for “W” mint mark quarters featuring these special pedigrees listed in the PCGS Set Registry.