The National Bank of Poland has issued (29th April) three new gold coins to mark the announcement of the Beatification of his late holiness, Pope John Paul II (1920 – 2005) who was the world’s first Polish head of the Catholic Church. The current Pope Benedict XVI announced the beatification, which is the first stage to Sainthood, on the 1st May from Vatican City.

Struck at the Mennica Polska (The Mint of Poland), the three coins are designed by artist Ewa Tyc-Karpińska and portray John Paul II in both formal and informal poses. The largest of the three, a 1000 Zlotych denomination shows His Holiness in formal robes with Mitre and sceptre on the obverse along with the legend “BEATYFIKACJA JANA PAWŁA II – 1 V 2011”. The reverse carries an intricately engraved image of circular stained glass pane along with the national emblem, the crowned eagle, in the center and the coin’s year of issue and denomination below. 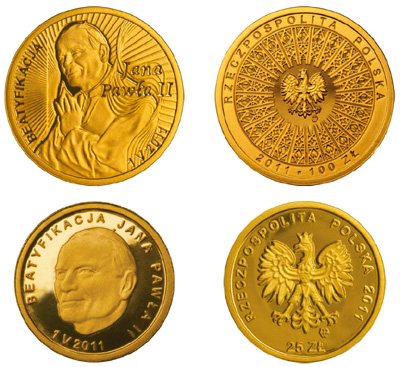 All three coins are offered in proof quality.

Born Karol Józef Wojtyła in the town of Wadowice, Poland in 1920, he was ordained as a priest in November 1946. He was appointed Bishop in 1958 and was promoted to the College of Cardinals in 1967. Cardinal Wojtyla was elected Pope by the College of Cardinals in 1978 after the papacy of John Paul I ended after only 33 days. Pope John Paul II’s reign in contrast was the second longest in history at 26 years 168 days. He is especially remembered for his steadfast position against communism and is credited with facilitating the eventual downfall of Poland’s communist government as well as those in the rest of Eastern Europe.

For more information on this and other coins offered by the Mint of Poland, please visit their website at: http://www.nbp.pl/homen.aspx?f=/en/banknoty/kolekcjonerskie/2011.html