The United States Mint created a special collector’s edition offering for the 1993-dated Thomas Jefferson Silver Dollar commemorative coin. Released in 1994, the Thomas Jefferson Coinage and Currency Set generated a great deal of excitement when collectors realized that the 1994 Jefferson Nickel included had been struck with a special matte finish. 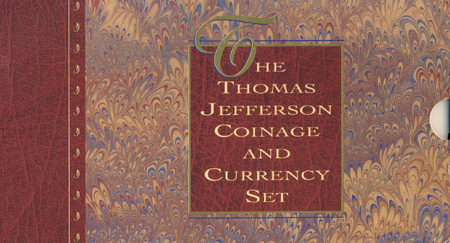 The commemorative program had been authorized under Public Law 103-186 to celebrate the 250th anniversary of the birth of Thomas Jefferson. The legislation provided for a maximum mintage of 600,000 silver dollars carrying the anniversary date of 1993. Because the legislation was not enacted until December 14, 1993, all of the coins were produced and sold during 1994. 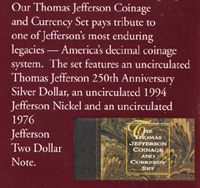 The US Mint announced the offering of a special set which would pay tribute Jefferson’s legacy with regards to numismatics as the father of America’s decimal coinage system and for his contribution to the creation of the United States Mint. Promotional literature stated that the set would feature an uncirculated Thomas Jefferson Silver Dollar, uncirculated 1994 Jefferson Nickel, and a 1976 Two Dollar Note. These sets had a pre-issue price of $34 for orders postmarked by June 24, 1994, and regular price of $39 for orders received after the cut off date.

It was not until collectors received the sets that a special finish was noted for the 1994 Jefferson Nickel included in the set. Following questioning by coin publication Coin World, the US Mint confirmed that a special finish had been used to match the surface of the nickel to the uncirculated commemorative silver dollar. Later information revealed that the special finish had been created by striking the coins twice with sandblasted dies. The nickels were described as “matte finish” or “matte proof” and considered by collectors to be a separate issue than the typical business strike.

The US Mint had intended to impose a product limit of 50,000 for the Thomas Jefferson Coinage and Currency Set, but they apparently forgot to include this information in promotional literature. Accordingly, sets were sold in excess of the intended limit, driven by collector enthusiasm for the special nickel. Final sales reached 167,703, which became the mintage for the 1994 Matte Proof Jefferson Nickel.

The sets and individual examples of the nickel initially jumped in value, but prices eventually receded. In subsequent years, the US Mint would release other circulating coins with a matte finish in other commemorative coin sets, each time generating strong collector interest.