Throughout the years, the United States Mint has issued a number of collector’s sets which include commemorative coin in special packaging and often accompanied by related objects. One of the more unique offerings was the Thomas Alva Edison Collector’s Set, which included a functioning light.

This product was issued under the Thomas Alva Edison Commemorative Coin Program authorized by Public Law 105-331. The program authorized the issuance of up to 500,000 silver dollars to mark the 125th anniversary of Edison’s invention of the light bulb. Surcharges raised from the sale of coins would go to various Edison museums and organizations throughout the United States.

The obverse of the coin was designed by Donna Weaver and included a depiction of Thomas Edison from the waist up holding an early experimental light bulb. The reverse was designed by John Mercanti and featured an image of Edison’s first light bulb. 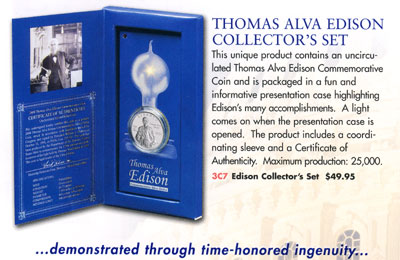 Later in the year, the Thomas Alva Edison Collector’s Set was offered, which included the uncirculated version of the coin in a presentation case highlighting Edison’s many accomplishments. In a fitting tribute, a light would come on when the presentation case was opened. A certificate of authenticity was also incorporated. This set was priced at $49.95 with a maximum production of 25,000 units. 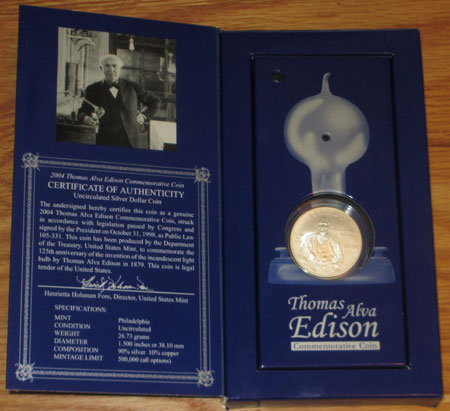 Ultimately, the special collector’s set proved successful, reaching final sales of 24,490 units out of the 25,000 maximum. Sales for the individual options reached 211,055 units for the proof version and 68,020 for the uncirculated version.

Today, these Collector’s Sets can still be found on the secondary market. Since they can be somewhat difficult to come by, they will typically command a premium above the cost of the individual uncirculated coin.