The Royal Canadian Mint have issued the third coin in their exemplary series, “Legacy of the Canadian Nickel” which chronicles the evolution of this denomination. Throughout its history, each of the nickel’s transformations provides a glimpse of a young nation that was seeking to define itself, and a Mint that would quickly come into its own.

This Legacy of the Canadian Nickel subscription is a retrospective look at the history of 5-cent coins minted by the Royal Canadian Mint, beginning with the crossed maple bough design that was used until 1921. The coins – offered by subscription, are faithful to their original design and include the effigy of the reigning monarch at the time of the coin’s original issue date. 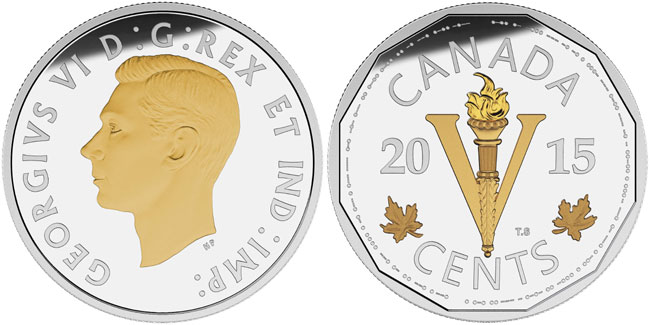 This, the third coin in the Mint’s series boldly honors the victory-themed five-cent coins which were made of non-nickel alloys from 1943-45 in support of Canada’s Second World War effort. The obverse of the coin includes the effigy of Canada’s monarch at the time of this issue, HM King George VI who reigned from 1936 to 1952.

Offered as a subscription, the series comprises a total of six coins and will be issued at the rate of one per month. Remaining coins include 4: The Identification of Nickel, 5: The Centennial 5-cent Coin, 6: The Beaver.