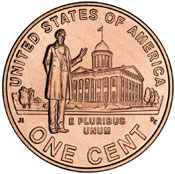 The launch ceremonies for this year’s four different 2009 Lincoln Cent designs have turned out to be popular events for collectors. After the first event attracted an estimated crowd of 1,500 people, the second event saw approximately double the number of attendees. With the next ceremony planned to take place in a little more than a week, will we see the number of attendees double again?

The launch ceremony for the 2009 “Professional Life” Lincoln Cent is scheduled to take place on August 13, 2009 at 10:00 AM CT. The location will be the Old State Capitol at the corner of 5th and Adams Streets in Springfield, Illinois. Attending the ceremony will be US Senator Dick Durbin, US Mint Director Edmund Moy, May Tim Davlin, and other Illinois State Officials.

The Old State Capitol is actually depicted on the reverse design of the penny that will be launched which makes the location appropriate. A young professional Lincoln stands before the building, in speech making pose. The reverse was designed by Joel Iskowitz and sculpted by Don Everhart.

Following the launch ceremony, there will be a coin exchange where attendees can exchange bills for rolls of the newly minted coins. There will be an exchange minimum of two rolls and a maximum of six rolls. These levels are subject to change. Attendees who are 18 years of age and younger will receive a free penny to commemorate the event.