The United States Mint’s silver medals honoring American military service in World War I went on sale January 17, 2018. The ordering window was open until February 30, with the medals’ mintages to be determined by sales (with a maximum mintage of 100,000 across all five options, for the Army, Navy, Coast Guard, Marines, and Air Service). 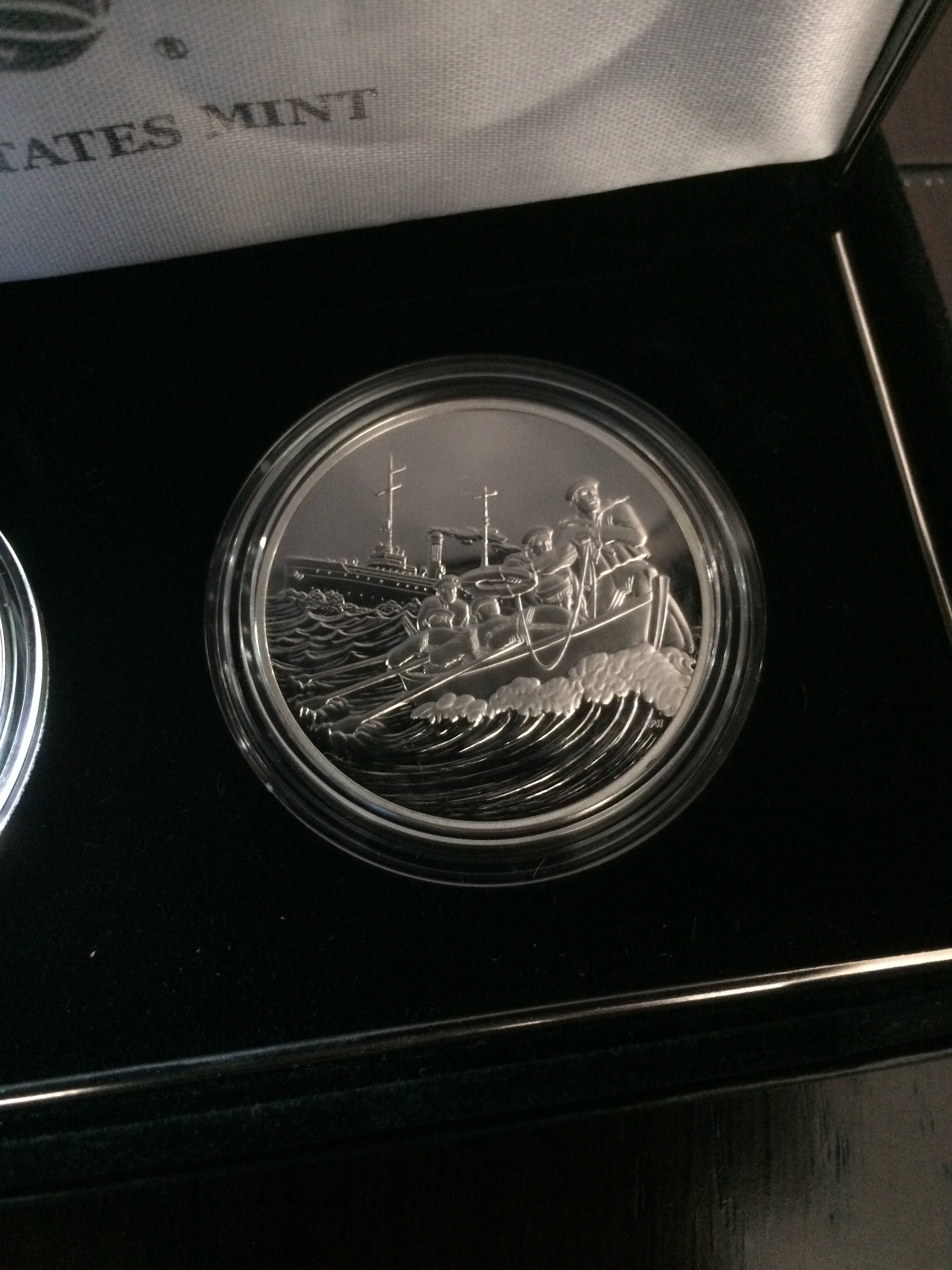 I placed my order for the medals on January 18—one of each military service, for a complete set. Then after a few days, I decided to order some extra Coast Guard medals for good measure. Why the extra medals? I figured the Coast Guard is the smallest of the military services, so its medal would likely have the lowest sales, making it the key variety in the series.

Don’t get me wrong; I’ve never been a coin flipper. That’s someone who tries to game the system, ordering multiples of a limited-edition coin or medal in order to mail them all off to be professionally certified and graded, then keeping the Proof-70s (highest grades) to sell for a quick high profit and returning the Proof-69s to the Mint for a refund (or simply dumping them into the secondary market). (Given the Mint’s high production standards, anything graded less than a 69 would be a condition rarity—an unusually low-quality product.) I don’t plan on flipping these medals, but I do like the idea of owning a modern rarity. Also, the Coast Guard medal has one of the most dramatic and stirring designs in the whole program.


So I placed my orders and then waited patiently. I knew from the Mint’s announcements that shipping wouldn’t start until late May. Weeks passed, and then I got an alarming email from the Mint on May 17: my orders couldn’t be filled!

Thank you for your recent order. Unfortunately, we are not able to fulfill it at this time. . . . If we do not hear from you within 48 hours, we will automatically cancel your order.

I was knee-deep in work when the email arrived, so I couldn’t immediately follow up with the sales department. Fortunately a few hours later a retraction email arrived: the earlier email had been sent in error. (It turns out that hundreds of other Mint customers received the same message and retraction.)

A few days later, on Tuesday, May 22, 2018, a friendly delivery-lady rang the bell and I signed for my first package of World War I medals, the order with one of each branch service. It was a nice hefty box, neatly and securely packed. Inside: a bit of cushioning material, an invoice, and five of the finest modern silver medals the U.S. Mint has produced. 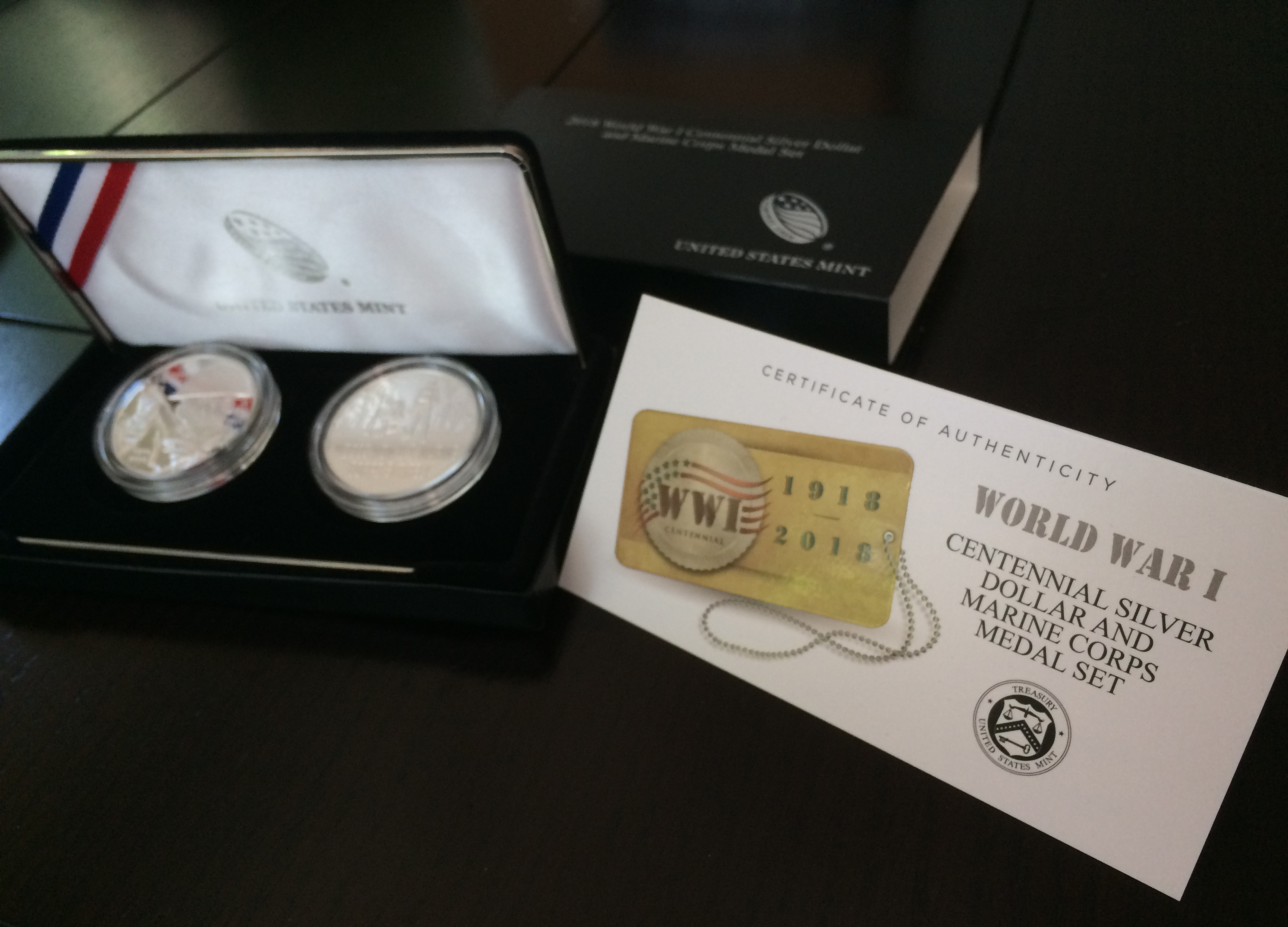 The packaging of the 2018 World War I Centennial Silver Dollar and Marine Corps Medal Set.

I’m very pleased with everything about these medals. Their packaging is attractive, in the style of modern-day Mint materials: a silver-foil–stamped cardboard slipcase and interior box, a velvet jewel-box with a red-white-and-blue grosgrain ribbon, a glossy print pamphlet and certificate of authenticity, and a Proof silver coin and medal encapsulated in crystal-clear plastic. (Each of the medals was sold with a Proof example of the 2018 World War I Centennial silver commemorative dollar.)

I plan on keeping my duplicate medals for the long run. Yes, I might sell one or two at some point. (I remember buying three of the Mint’s wildly popular 2001 American Bison silver dollars and quickly selling one for enough profit to pay for all.) But in the meantime, I’ll enjoy their artistry, and be quietly satisfied with their rarity. (With the U.S. Coast Guard having 56,000 members, yes, I do think a mintage of less than 9,000 qualifies the medal as a rarity!) 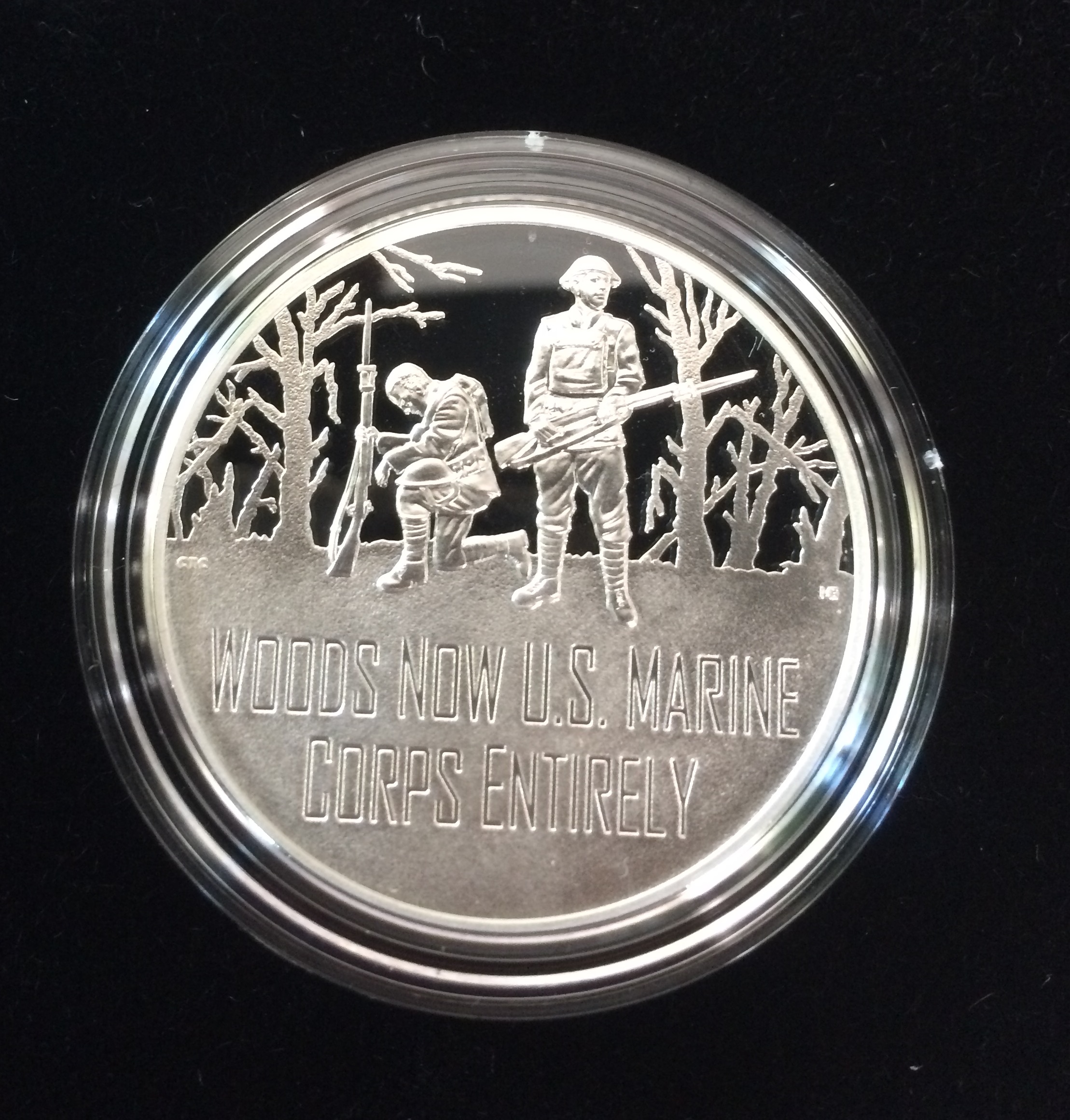 The obverse of the Marines medal depicts the aftermath of the Battle of Belleau Wood. One Marine is standing guard while the other kneels to pay respect. The inscription quotes a report to the American Expeditionary Forces: WOODS NOW U.S. MARINE CORPS ENTIRELY.

I’ve been a student of World War I history for many years. This set of commemorative medals fits very nicely into my historical interests and my collection. I hope if you’re fortunate enough to acquire one or more, that you enjoy them as much as I do.

Dennis Tucker is a publisher at Whitman Publishing, a life member of the American Numismatic Association, and a member of the United States Treasury’s Citizens Coinage Advisory Committee.