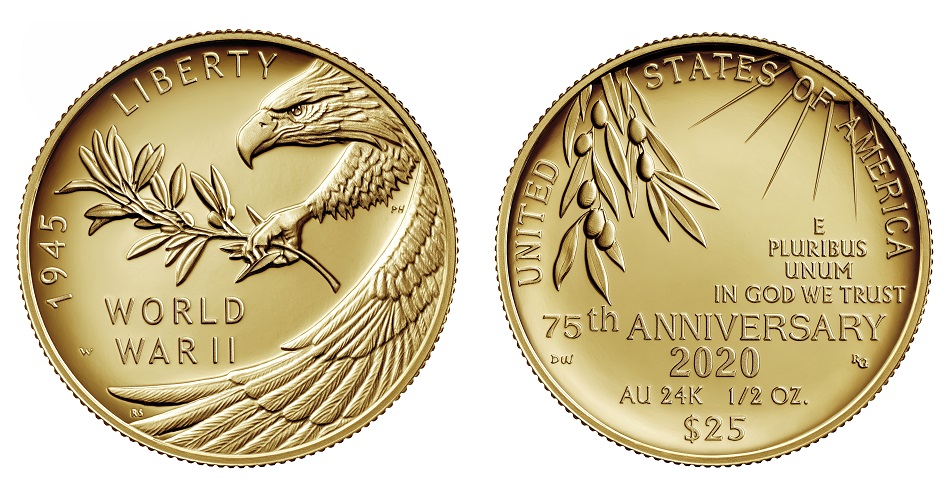 This year marks the 75th anniversary of the end of World War II. To honor the sacrifices and bravery of Americans who served during the war, the U.S. Mint will release four numismatic products in Fall 2020 in addition to the circulating America the Beautiful Quarters announced earlier in the year.

World War II lasted from 1939 to 1945, pitting the Allies, including the United Kingdom, Soviet Union, and United States, against the nationalistic ambitions of Nazi Germany, Italy, and Japan. The U.S. entered the war in December 1941 after the Japanese bombed Pearl Harbor, Hawaii. Fighting occurred across Europe, Africa, and Asia, and throughout the Atlantic and Pacific oceans. Millions of servicemembers lost their lives, more than 400,000 of which were Americans. But the war also cost the lives of tens of millions more civilians, including six million Jews in the Holocaust.

Nazi Germany surrendered on May 8, 1945, marking victory in Europe. Japan announced its surrender on August 14, 1945, and formally signed on September 2, bringing a complete end to the war.

The Mint will release four numismatic products in Fall 2020, two featuring a “V75” privy mark and two with their own design. The privy mark design features V75 inside an outline of the Rainbow Pool at the World War II Memorial in Washington, DC. Special End of World War II 75th Anniversary American Eagle gold and silver Proof coins will have this privy mark on the obverse.