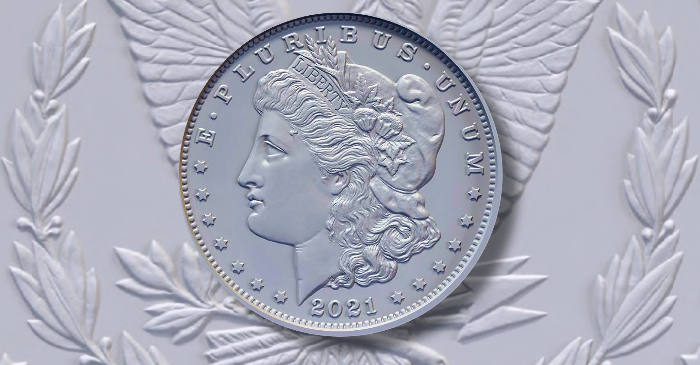 For several generations, the Morgan silver dollar has ranked near the top of the list—if not sitting comfortably in the #1 spot—as the most popular classic American coin. Hobbyists collect them by date and mintmark, by die variety, and sometimes even by the roll or bag. There are folders, albums, display cases, and other ways to store and show off the hefty old coins. Entire books have been written about them. Even people who don’t consider themselves coin collectors are familiar with, or at least vaguely aware of, the Morgan dollar. It’s part of our national shared culture.

That awareness is about to take a sharp upward turn this year. 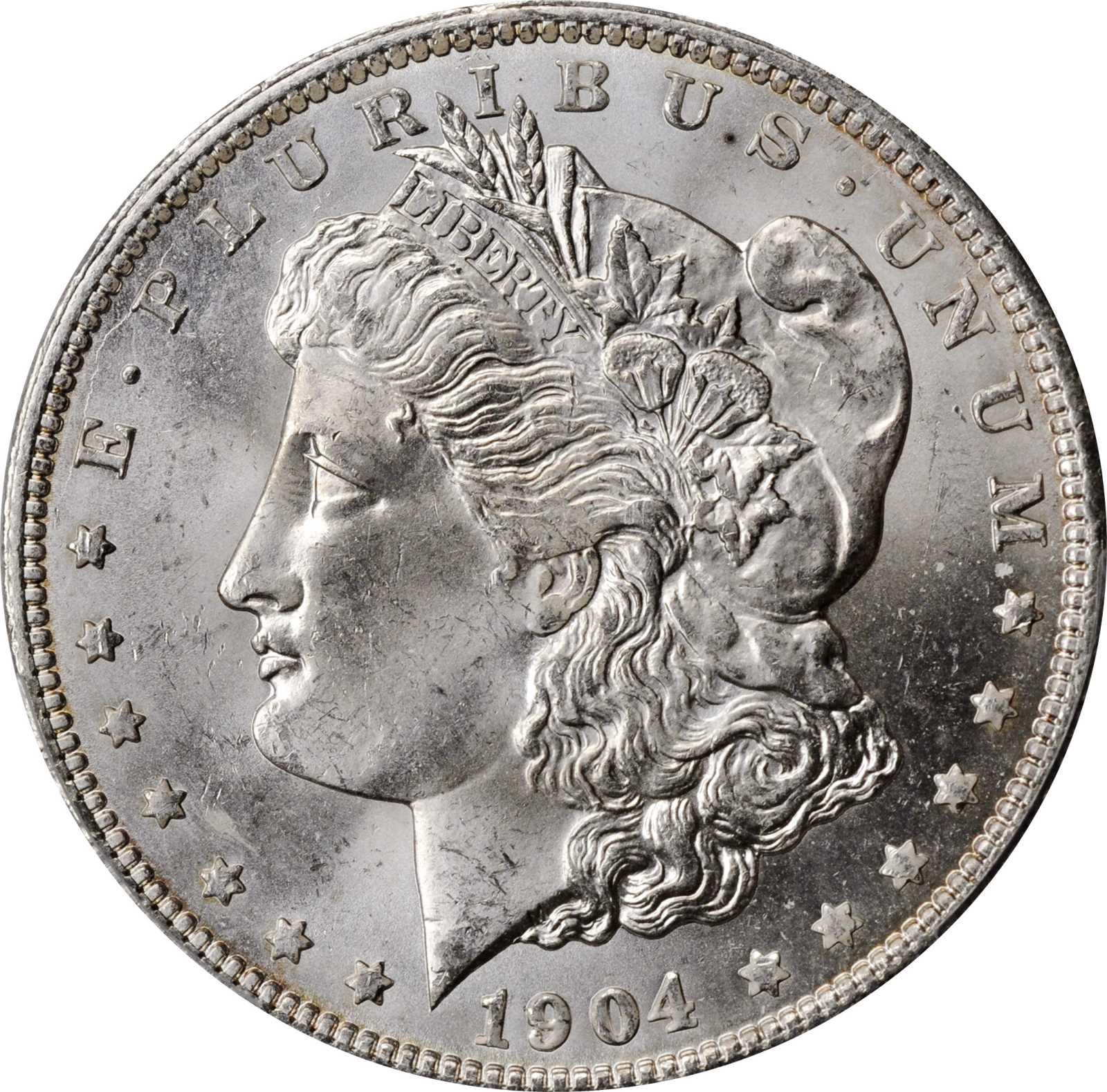 A Morgan dollar struck at the New Orleans Mint in 1904. (Courtesy of Stack’s Bowers Galleries). Hover to zoom.

The first Morgan dollars—named for their designer, English-born artist George T. Morgan, who worked for the U.S. Mint in Philadelphia—were produced in 1878. From that point, they were minted annually through 1904. Every active Mint facility was involved in their production (Philadelphia, Denver, San Francisco, New Orleans, and Carson City). Every year, millions of the coins—and in some years, tens of millions—were added to the nation’s reserves. 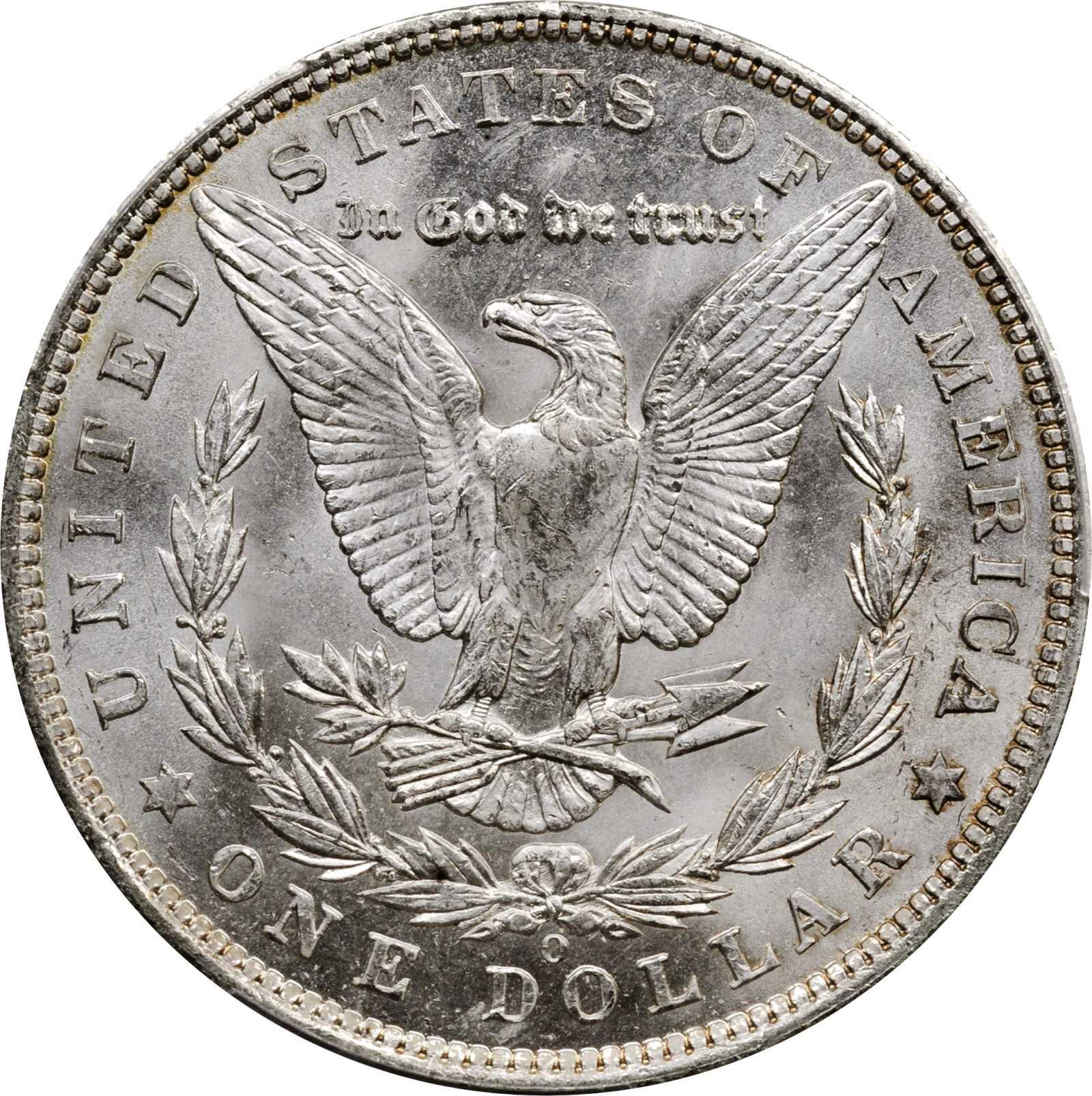 A Morgan dollar struck at the New Orleans Mint in 1904. (Courtesy of Stack’s Bowers Galleries).

After 1904 there was a hiatus in minting; demand for the silver dollar was low, and the bullion supply was exhausted. In 1918 Congress passed the Pittman Act, which melted more than 270 million silver dollars sitting idle in Treasury storage. New silver dollar coins were scheduled to be minted from this freshly replenished bullion supply.

In 1921 the Peace dollar was designed as a coin celebrating the end of the 1914–1918 Great War. Before minting began for the new coin, George Morgan’s old designs were brought back for one final production—and a massive production it was. Nearly 87 million Morgan dollars were struck in 1921 at the Philadelphia, Denver, and San Francisco mints.

The Guide Book of United States Coins describes the fate of many of the Morgan dollars minted from 1878 to 1921:

Although silver dollars were used in commerce in certain areas of the West, paper currency, by and large, served the needs of trade and exchange. As these hundreds of millions of newly minted dollars were not needed, most were put up in 1,000-coin canvas bags and stored in Treasury vaults. 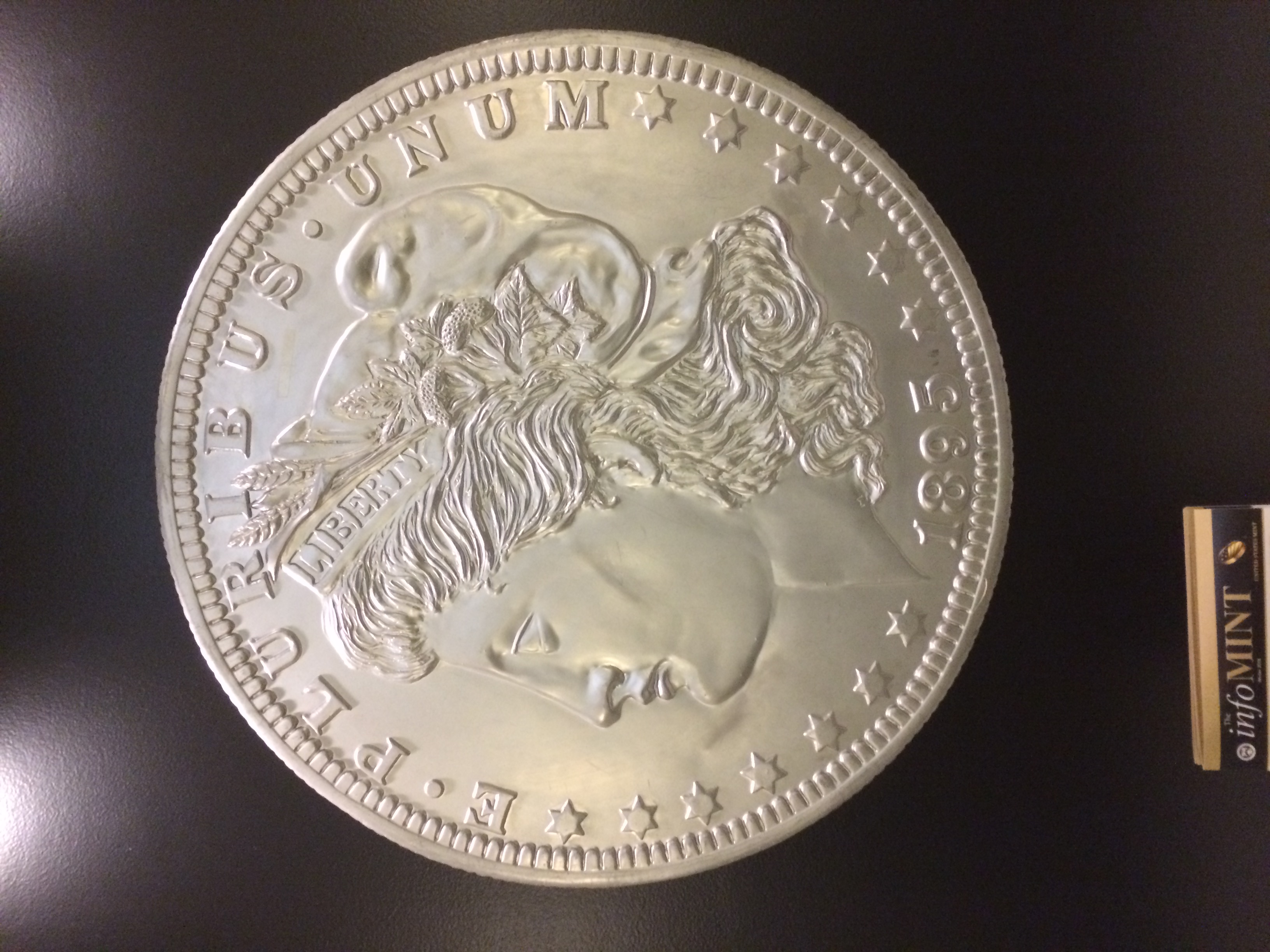 A sculpture based on the Morgan silver dollar, at U.S. Mint Headquarters in Washington, D.C. (Photographs by Dennis Tucker).

Into the Vault, and Out Again

Morgan dollars started becoming popular with coin collectors in the 1950s. Then, something remarkable happened. In 1962, as the holiday season approached, bags of silver dollars that had been sealed in the Philadelphia Mint since 1929 were brought out of storage. They would meet the year-end demand from people who liked to give the fancy old-time coins as Christmas gifts. Soon it was discovered that the bags included Brilliant Uncirculated 1903-O dollars—at the time, considered to be the rarest of them all, worth $1,500 apiece! In the treasure hunt that followed, hundreds of thousands of coins of that particular date/mintmark were discovered in beautiful Mint State. Previously experts had estimated only a dozen or so had survived the Pittman Act melt of 1918. 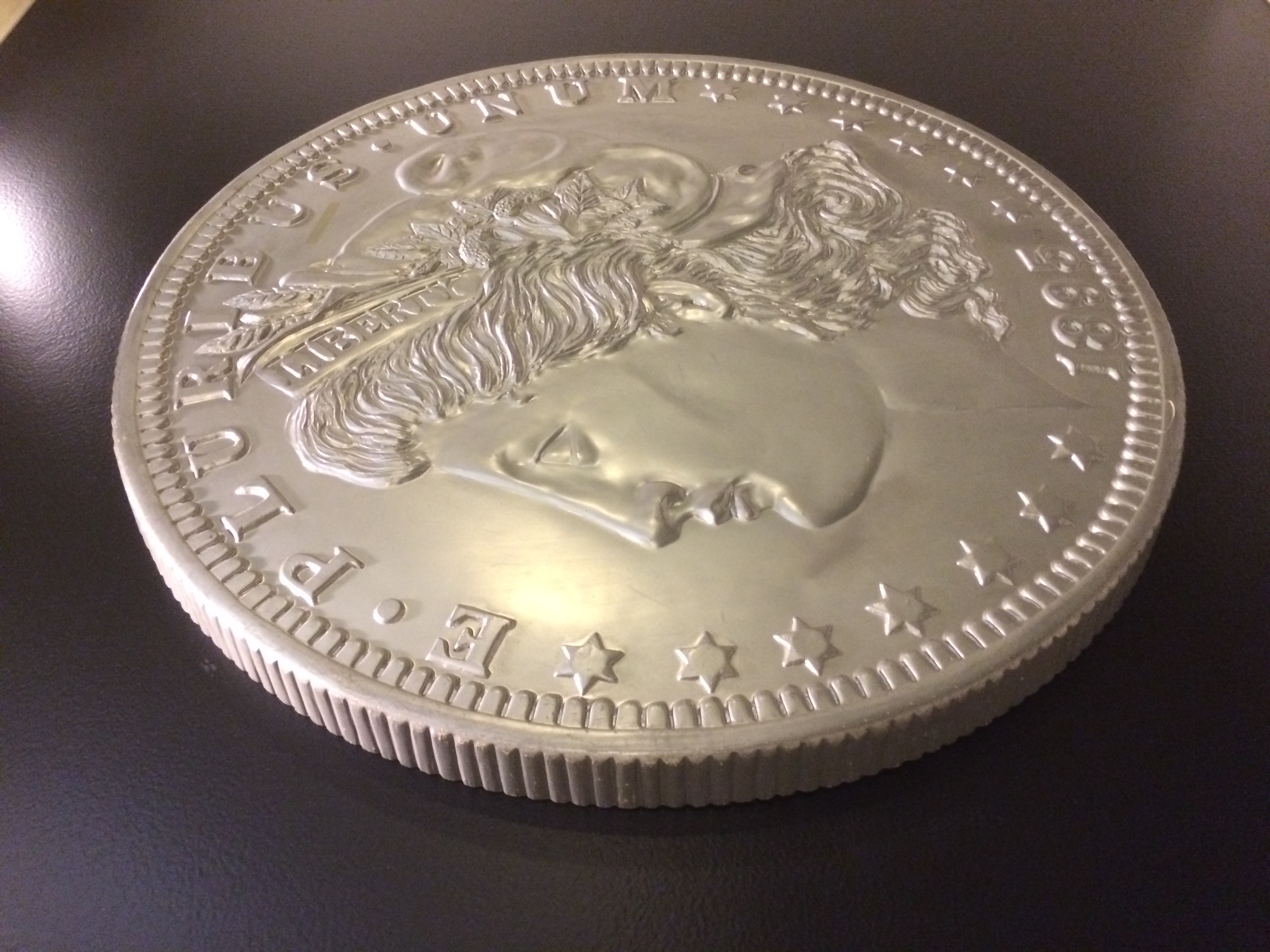 A sculpture based on the Morgan silver dollar, at U.S. Mint Headquarters in Washington, D.C. (Photographs by Dennis Tucker).

Through 1963 and up to March of 1964, speculators and collectors lined up at banks and the Treasury Building to get their hands on the bagged-up riches. Some people even came with wheelbarrows, traded paper currency for cold hard cash, and left with 1,000-coin canvas sacks to search through. Hundreds of millions of Morgan dollars were brought back into the light of day (and into hobby collections). Then, when there were about three million coins remaining—many of them from the Carson City Mint—the Treasury put a stop to the payouts at face value. The last few million coins were auctioned off by the General Services Administration.

This flurry of activity, excitement, and competition cemented the popularity of the Morgan dollar. Instead of permanently oversaturating the market, the hundreds of millions of coins actually increased the number of active collectors, and values went up with the demand. 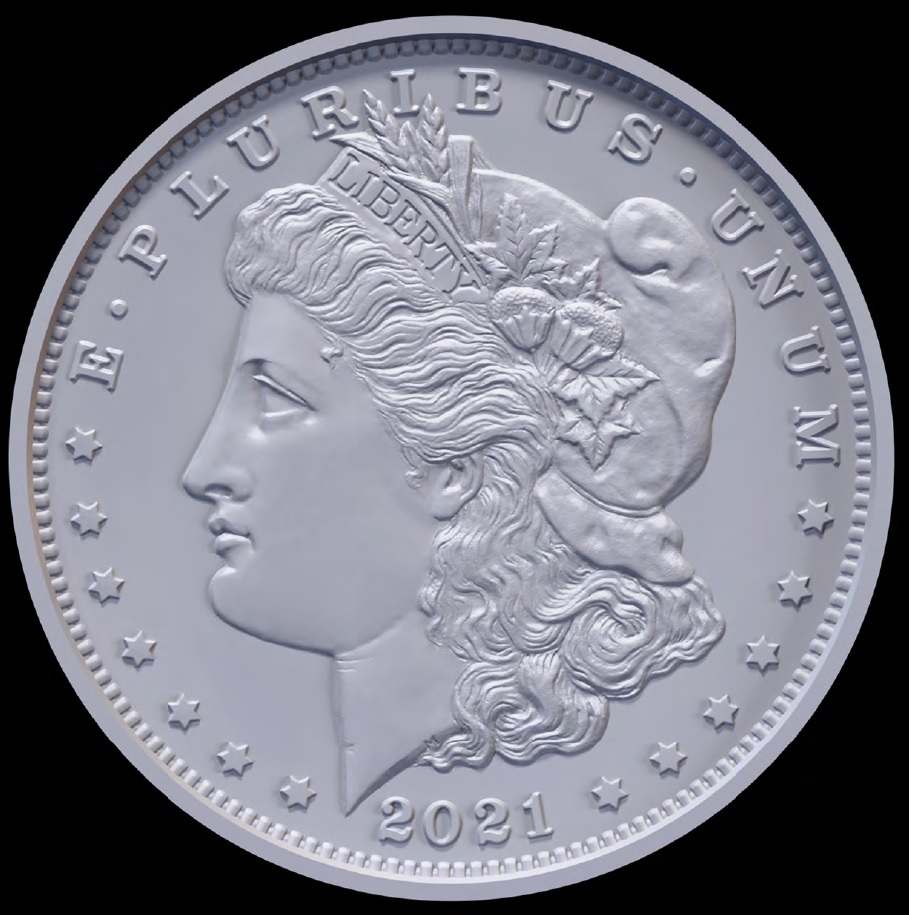 United States Mint rendition of the obverse of the 2021 Morgan silver dollar. (Courtesy of the U.S. Mint).

Today the 1921 Morgan dollar is the most commonly seen coin in the entire series. If Grandpa had a cigar box where he kept old coins, and if that collection included a silver dollar, chances are good it’s a 1921 Morgan.

For 100 years, collectors have known those 1921 Morgan dollars as the last of their breed—but that’s about to change. For 2021, Congress has authorized the minting of new centennial dollars to celebrate the famous coin series and mark the 100th year of its (previously) final issue. 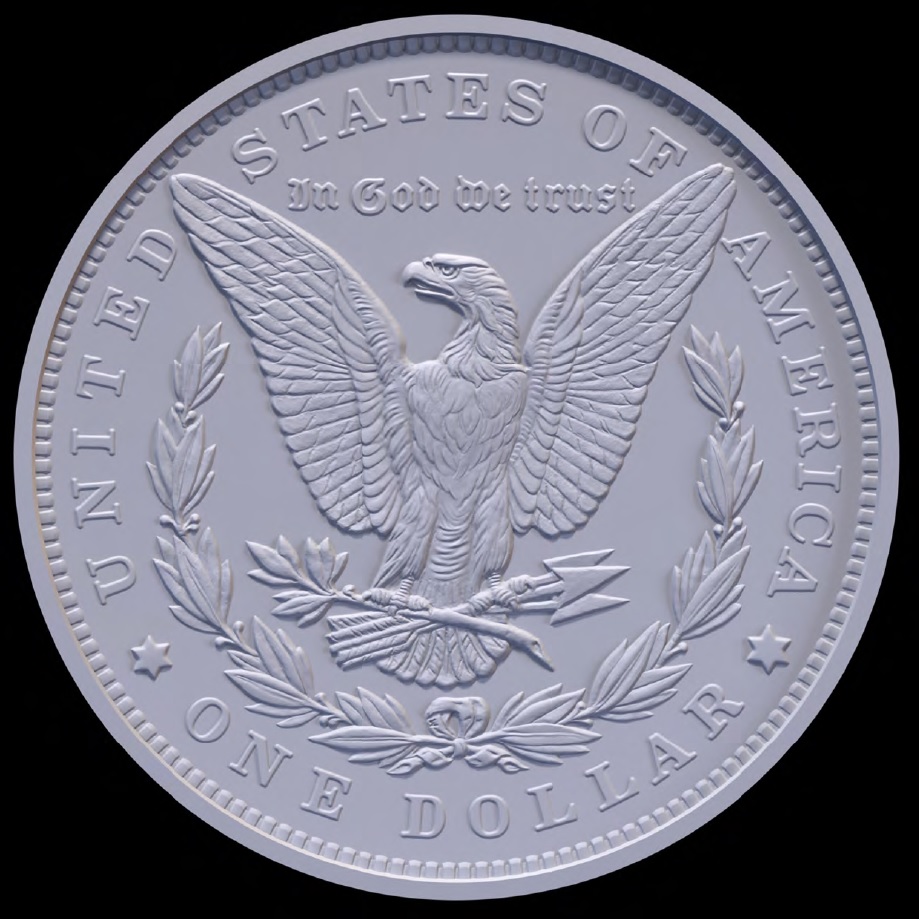 United States Mint rendition of the reverse of the 2021 Morgan silver dollar. (Courtesy of the U.S. Mint).

The Citizens Coinage Advisory Committee convened by videoconference on January 19, 2021, to review designs for the new Morgan dollars. U.S. Mint Chief Engraver Joseph Menna and Ron Harrigal, the Mint’s manager of design and engraving, discussed the process of creating the new coins. They will be an “homage” or “rendition” of the old silver dollars, crafted from a variety of Mint assets and records to “honor the original intent of the original artists as much as possible,” as Menna said. Harrigal pointed out that the change from the historical .900 fineness to .999 fine silver would cause a minuscule reduction in planchet volume. Modern technology will bring improvements over what was available a century ago. CCAC members reviewed computer-generated illustrations of the new designs and were pleased with the outcome.

The coins are being minted under the 1921 Silver Dollar Coin Anniversary Act, signed into law by President Donald Trump on January 5, 2021. It “requires the Department of the Treasury to mint and issue coins in honor of the 100th anniversary of the completion of coinage of the Morgan dollar and the 100th anniversary of the commencement of coinage of the Peace dollar.” The legislation was the brainchild of two members of the CCAC, chairman Thomas Uram and Michael Moran. Both are longtime numismatists and published researchers active in the hobby community. Several committee members praised Uram and Moran during the January 19 meeting for their persistence and hard work in getting congressional support for the legislation. The two numismatists, in turn, thanked Kentucky congressman Andy Barr, whose faith in them and the project helped bring it from dream to reality.

Collectors interested in the classic Morgan dollar can explore the coin series in any number of books:

Dennis Tucker is a longtime coin collector. He serves the hobby community as publisher at Whitman Publishing, and is the numismatic specialist of the U.S. Treasury Department’s Citizens Coinage Advisory Committee. He is a life member of the American Numismatic Association, a past governor of the Token and Medal Society, and secretary pro tem of the Rittenhouse Society.