There is a new treat for those of you who pride yourselves as both coin fanatics and Anglophiles… after a lengthy absence of more than 200 years, give or take a year or two, the Royal Mint has returned to London! Well…don’t any of you get too excited – they’re not producing the coinage of the realm there, but they have indeed returned in style. A new exhibition has been opened just last week (24th May) and it is for many who have so far attended – myself included, the Mint’s triumphal return to their spiritual home – and right where they belong! 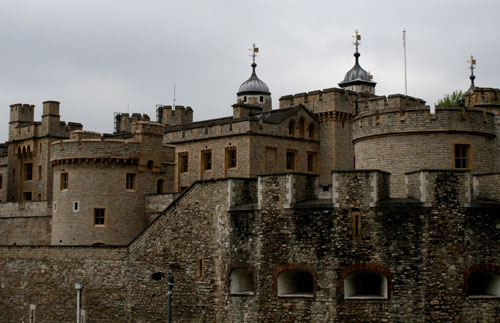 Her Majesty’s Royal Palace and Fortress, more commonly known as the Tower of London was home of the Mint in London, later the Royal Mint from the 1270’s to 1812.

Where does one begin to tell the tale of one of the most famous Mints in the world? Although a Mint in London has been active since the 800’s, today’s Royal Mint claims a continual history which dates back to the 1100’s, though it wasn’t referred to the Royal Mint until many, many years later. This particular Mint in London was just one of many dotted around England. It wasn’t until the 1270’s that King Edward I moved the workings of London’s Mint within the Tower Walls. The King took this decisive action as it was deemed that England’s coins at the time were worn, clipped, debased or intentionally damaged. He ordered the country be re-coined and it was in this safe and secure location that the process of introducing new coins was carried out. 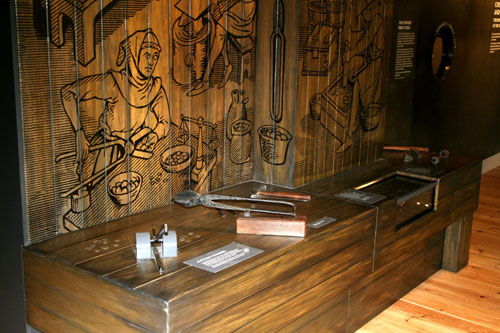 Various tools on display, the illustration behind demonstrates their use in the production of metal blanks.

London’s Mint which was firmly ensconced and protected behind the walls of the Tower was also visited by Queen Elizabeth I – she, being a former prisoner there in 1554 for over a year – as she wished to see the progress being made to improve and increase the gold content in the coinage of the realm, which she had ordered soon after her accession. The visit to the Mint is recorded to have occurred on the 10th July 1561. It has been suggested that the Queen herself struck some of the coins to be used in her realm on the day! 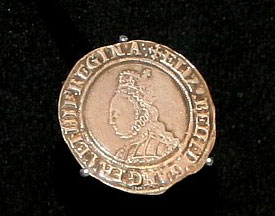 Shilling of Queen Elizabeth I included in the
exhibition, it is said the Queen herself struck some
gold coins during her historic visit to the Mint in 1561.

In 1696, Sir Issac Newton, famed mathematician and physicist took up the post of Warden of the Mint, this post was responsible for investigating cases of counterfeiting. He later held the office of Master of the Royal Mint from 1699 until his death in 1727. He is credited with updating the Mint’s facilities and transforming production methods which resulted in substantially greater numbers of coins at a savings in overall costs. 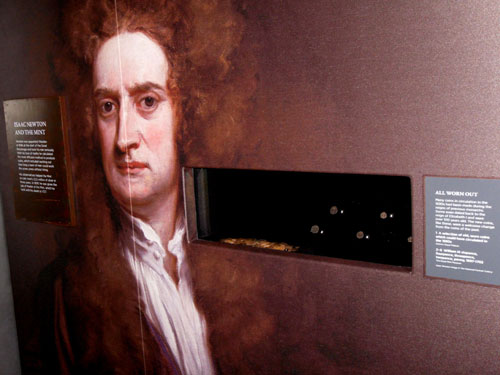 Sir Issac Newton, one of the more well-known Mintmasters is featured prominently in the new
exhibition.

For more than 500 years, the spectacular coins that have become so much a part of English and British history were produced in various locations within the walls of the Tower – there even being designated a “Mint Street” where the administrative and previously before that, the actual workshop of the London Mint was located. It is this exact location today where Historic Royal Palaces in partnership with the Royal Mint Museum have launched a new permanent exhibition dedicated to the history of the Royal Mint. All coins on display are genuine pieces which are part of the Royal Mint Museum’s extensive archives collection.

Some of the coins displayed in the exhibition include an excellent example of an Edward I silver groat, minted between 1279-1307. A Gold trial plate from an Angel of Henry VIII, minted 1542. An Elizabeth I gold Half-pound, minted from 1591-94. Queen Elizabeth I was celebrated for restoring Tudor currency after her father’s reign. The queen ordered all old coins to be brought to the Mint, melted down and re-made into new, purer coins with her portrait. The queen described the measures as ‘bitter medicine’. Of particular interest is a Commonwealth unite – equaling 20 shillings minted in 1649 and a silver crown minted in 1658. Oliver Cromwell refused to be called king and the official coins produced during the Commonwealth did not feature a picture of any ruler. However, on this coin, designed by Chief Engraver Thomas Simon, Cromwell was shown as an Emperor.

A “must-see” coin included in the exhibition is the famed “Petition Crown” of King Charles II minted in 1663. The story behind this breath-taking coin is that in the 1660s, Thomas Simon, formerly Chief Engraver to Oliver Cromwell, was so determined to engrave the coins of the newly restored King Charles II that he sent the king one of these beautiful coins to demonstrate his skills. Yet, despite his efforts, Charles gave the job to Dutchman John Roettiers. Sadly, just three years later, Simon fell victim to the plague and died. 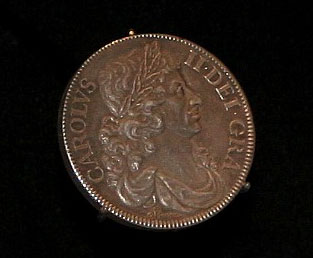 Famed Charles II “Petition Crown” is on display along with projected images of the intricate lettering which appears around the rim. 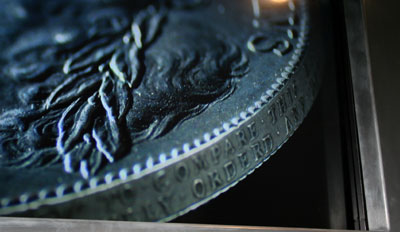 For American coin enthusiasts, on display is a beautiful Countermarked American Liberty dollar dated 1799. This coin actually circulated in Great Britain due to some adverse circumstances. By 1797, war with France had left England’s gold stocks perilously low. To avert financial disaster, the Mint began to counter-stamp a small cameo portrait of King George III on several foreign coins, including American dollars and French francs, to make them legal English currency. 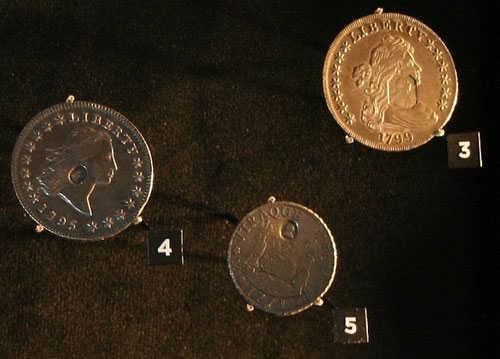 Early American Dollars which were counterstamped with cameo portraits of King George III. A
beautiful example of the 1795 flowing hair dollar & 1799 Bust dollar are included.

The exhibition focuses not only on the actual production of coins themselves but, it also gives us a great insight about the people who worked there, their lives and daily routine. Cleverly re-created with projections and sound recording, Mint workers are brought to life as we’re transported to parts of the production floor and are introduced to the craftsmen, the tools and procedures used to make the coin of the realm. Much of the displays are interactive and “hand’s on” and very youngster friendly with video displays and touch-screen participation.

Concentrating on important chapters within the 5 centuries which the Mint was resident, the displays include some of the most important and historical coins that are noted either for their innovation, their importance in commerce or most notably and in the case of the civil war, a change in government. In 1649, Oliver Cromwell and his Commonwealth government melted down gold from the original Crown Jewels and turned it into coins as an act of defiance against the old monarchy. 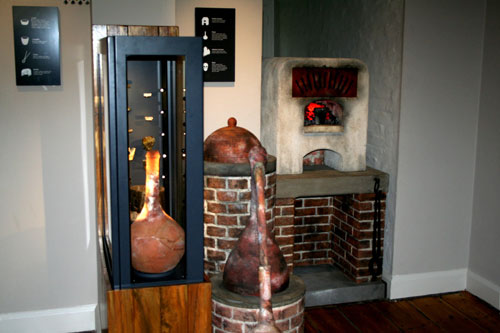 Re-created furnace used to melt down metals. Clay pots from the Tudor era used to melt metals are seen in the enclosure.

After more than 500 years within the Tower walls, the Royal Mint was moved to purpose built headquarters adjacent to the Tower in 1812. This location was retained until the Royal Mint moved further afield in 1968, to Llantrisant, Wales and to state-of-the-art premises, in time for the production and re-coining of the nation – this time to a decimal currency which was introduced in 1971.

If London is on your itinerary this summer, do make a point of dropping by the Tower and visiting the new addition. During the next few weeks, there will be special events in conjunction with the new addition to the Tower. The Exhibition has also developed a free application for smart phones to continue and enhance the interactive experience, the “Mint Master” explores three historical eras of the Royal Mint. http://www.hrp.org.uk/TowerOfLondon/stories/palacehighlights/CoinsandKings/mintmaster

The Historic Royal Palaces in partnership with the Royal Mint Museum will determine if additional displays or more hidden treasures of the Museum will feature in future displays. For more information on this extraordinary exhibition, please visit the website of the Historic Royal Palaces at: http://www.hrp.org.uk/TowerOfLondon/stories/palacehighlights/CoinsandKings/default.aspx Admission is by ticket only which also offers you the opportunity to visit the Crown Jewels and a Yeoman Warder guided tour and talk, live historical re-enactments, the White Tower tour, children’s activity trails and much more. Last admissions, 5:pm – seven days a week.

My thanks go to Eloise Maxwell, Press department of the Historic Royal Palaces and to Megan Gooch, Curator of the Royal Mint Museum for their kind assistance during my visit, it is greatly appreciated.

All images courtesy of Michael Alexander ©2013.

Coins and Kings: The Royal Mint at the Tower

1270s – Edward I’s currency in crisis. England’s coins were old, worn and many had been deliberately damaged. Taking decisive action, the king moves the Mint inside the walls of the Tower and orders a process of total recoinage. The king also punishes anyone thought responsible for clipping or counterfeiting coins.

1509-47 – Reign of Henry VIII, during which time many silver coins were debased. As the coins wore down, copper shone through the king’s image, earning him the nickname ‘Old Coppernose’.

1558-1603 – Reign of Elizabeth I, the monarch celebrated for restoring the Tudor currency after her father’s reign. The queen orders all old coins to be brought to the Mint, melted down and re-made into new, purer coins with her portrait.  On 10 July 1561, she visits the Mint to check on progress.

1649 – The Commonwealth government melts down the gold from the original Crown Jewels and turns it into coins as an act of defiance against the old monarchy.

1658 – In the year of his death, Cromwell appears as an Emperor on a coin designed by Chief Engraver Thomas Simon.

1660-85 – Reign of Charles II, a period of major change at the Mint. This includes the introduction of sophisticated new screw presses.

1696 – Isaac Newton appointed Warden of the Mint, in which role he pursues counterfeiters and oversees the re-coining of nearly £2.5 million of silver.

1792 – Outbreak of the French Revolutionary wars. By 1797, the cost of the war had left England’s gold stocks perilously low. To avert financial disaster, the Mint began to stamp George III’s portrait on foreign coins, including American dollars and French francs, to make them legal English currency

1810 – The mint moves to a new, purpose-built factory on neighbouring Tower Hill.