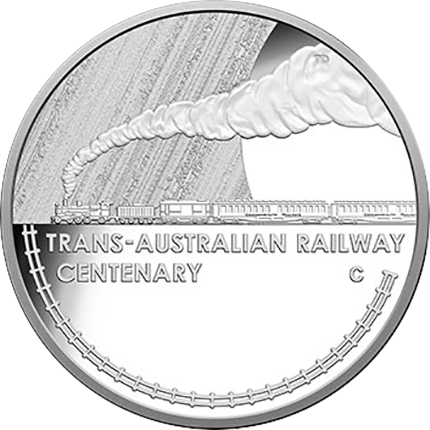 The first coin to be minted in 2017: the Trans-Australian Mint Centenary silver dollar, struck in Canberra, Australia, by Luke Marshall.

Update, January 1: It’s official—the world’s first coin of 2017 has been struck, and the design honors the Trans-Australian Railway (shown above). Congratulations to Sydney native Luke Marshall, and happy New Year to all!

Every year from 2012 through 2015, a teenager named Harley Russo camped out on the mint’s doorstep for days on end to win the privilege of striking that first coin. Australia’s ABC News reports that the first year, he held his spot for four days. The next year, it was five days. During the third and fourth years, he needed to be in place by Christmas night to stay ahead of the crowd. In fact, in 2015, Russo had been in his spot barely 20 minutes before the next person showed up. Since the first 100 people in line also receive authenticated first-day coins, the event is one of the most popular in the year for collectors.

Only one coin is the first, however. Russo has reported being offered a lot of money for his, and even turned down $3,500 (AU) to give up his spot at the head of the line.


This year, the Sydney native decided to to take a pass on the event. He says his brothers (he is one of triplets) want to do something else for New Year’s Eve. Another teen boy, 16-year-old Luke Marshall, of Canberra, won the coveted spot by showing up first on Christmas day. Marshall has been trying for years; the Sydney Morning Herald reports that from 2012 through 2015, he was 7th, 9th, 8th, and 10th in line, respectively. As long as he isn’t waylaid by food poisoning or some other emergency, he’ll walk through the door at 10 a.m. on Sunday, pay the $3 retail price, and strike the first coin to be minted anywhere in the world in 2017.

Adding to the excitement is the fact that the design of the new coin is not revealed until the first-strike ceremony. In 2013, it was a $1 Holey Dollar and Dump bicentennial. In 2014, the $1 coin marked the bicentennial of publication of A Voyage to Terra Australis, while the 2015 coin honored the centennial of the Gallipoli Campaign and the role of the Australian and New Zealand Army Corps (ANZACs). The 2016 coin paid tribute to Australia’s first sovereign coin.

As for the coin Luke Marshall will strike on Sunday, as soon as we know the design we’ll let you know. A safe weekend to all, and a very happy New Year!   ❑