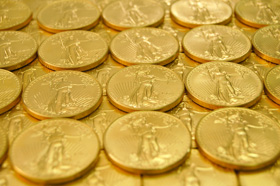 This status was supported by relatively limited government regulation when compared to the United States today.

The prosperity of American workers was also supported by gold.

In the late 1940s, it was not legal for American citizens to own physical gold.  However foreigners were permitted to present US currency to the US government and be paid in gold at the rate of one ounce of gold for every $35 of currency redeemed.  Because the US government placed minimal restrictions on this gold exchange, few parties felt the need to go ahead and turn in their currency to obtain gold.

Back then, the US was virtually the only country in the world where the government stood ready to take back its own outstanding currency in a fixed-rate exchange for gold.  It was this strong gold-exchange policy, where the US dollar as effectively considered as being “as good as gold,” that resulted in the US dollar serving as the global reserve currency.

Also, because the US dollar was fixed in value to gold, it became the unit of choice for international credit.  Consequently, the US also served as the world’s largest creditor.  In other words, the US became the world’s banker.

Today, the United States economy, its work force, and the US dollar do not merit any of these accolades.  In a free market, there is a tendency for the less efficient operators to either improve productivity or go out of business.  Therefore, it should not really surprise us that people in other nations, when not hampered by government restrictions or subsidies, have become more productive and prosperous.

However, it is not the fact that other nations are advancing that has made the largest difference in the competitiveness of American businesses and workers.  It may surprise many people to learn that the relatively high cost of American labor is not even a major factor in the decline of American competitiveness.

Not long ago, Intel Corporation, an American company that is the world’s largest semiconductor chip manufacturer, revealed that it would cost about $1 billion more to open a new factory in the United States compared to what it would cost in a number of other countries.  Out of this amount, only about 10% was attributed to the higher cost of American labor.  The remaining $900 million of the excess burden was attributed to the higher costs of complying with US government regulations versus those in effect in other nations.

So, it really isn’t the cost of American workers that is putting US companies at a competitive disadvantage, and forcing them to shut down their US factories to replace them with foreign plants.  Instead, is the burden of the US, state, and local governments that is destroying American jobs.

It is important to realize that one of the requirements for a company to create permanent jobs is that it needs some certainty of the long-range legal environment in which it plans to conduct business.  In the late 1940s, tax laws and business regulations were relatively stable, where it was possible to make long term investments in potentially profitable opportunities.

Today, employers no longer even know what their health care costs will be in a year or two if they hire new workers.  Therefore, they have a disincentive to create new jobs in the US.  This loss of American jobs is one of unintended consequences of last year’s health care legislation often called Obamacare.

Tax law is another example of the destructive effects of an unstable environment.  If a company is uncertain what tax rates, deduction limits, and tax credits will apply even for the current tax year, let alone future years, companies are required to plan on a worst-case possible scenario which will not necessarily reflect what comes to pass.  With the growing number of regulations and taxes imposed on hiring employees, the conservative solution is to avoid creating new American jobs.

The same goes for interest rates.  Today’s interest rates are artificially suppressed by the US government.  But it is not obvious that interest rates will remain this low for years and years.  The cost to borrow money is one of the key factors in making decisions to open production facilities which would create new jobs.  If companies have to make worst-case assumptions on future interest rates, the resulting analyses would wipe out plans to add potential new American jobs.

The problem also applies to other regulations.  It used to take about three years from the initial discovery until a new mine went into production.  Today there are so many more permits required and regulations to follow that it takes an average of ten years to bring a new mine into production.  The seven years of added delay increases the risk of failure of the venture, which makes it more difficult to justify funding the development.  Even if the project goes forward, it now takes seven more years before most new jobs are created for those working for the mining companies.

The falling value of the US dollar also creates a disincentive to invest in creating American jobs.  A company would prefer to establish a business in a country where the value of future paper profits would represent at least the same purchasing power when compared to the purchasing power of the amounts invested.

In 1971, President Nixon closed the gold-exchange window.  Since then, the US dollar has generally declined in value against other paper currencies.  It has dropped more than 95% against gold.  This falling value has, over time, made the US dollar less attractive as the international reserve currency.

In sum, there are many ways in which the US government destroys existing American jobs and thwarts the future creation of new opportunities for US workers.

Last Thursday, President Obama announced his supposed jobs creation program.  When analyzed, the plan, if it becomes law, will actually destroy more permanent US jobs than it will create.  Much of the problem is that the alleged benefits are the short-term continuation of some jobs and the creation of temporary jobs that will only last through the 2012 election, which just happen to go to sectors of mostly Democrat voters.  The explicit costs of generating these short-term jobs will be a permanent increase in the overall tax burden.  When investors have fewer dollars available to create new jobs, the hidden costs will be the permanent jobs that will never be created.

What President Obama proposed in his speech was simply more of the same failed policies of his own and his predecessor administrations that have crippled the creation of American jobs, reduced the prosperity of American workers, and turned the US into the world’s largest debtor nation.

Nowhere in Obama’s proposals was there any discussion of using gold as a means to help re-establish the long term stability of the US dollar.  It may seem like an unrelated matter, but having a stable currency would go a long way towards curing some of America’s current economic problems.

If the politicians in Washington were serious about trying to create jobs in America, they would focus on eliminating all the job-destroying regulations, let interest rates trade on the free market, and return to a stable currency.  Monetary gold can be part of the solution.