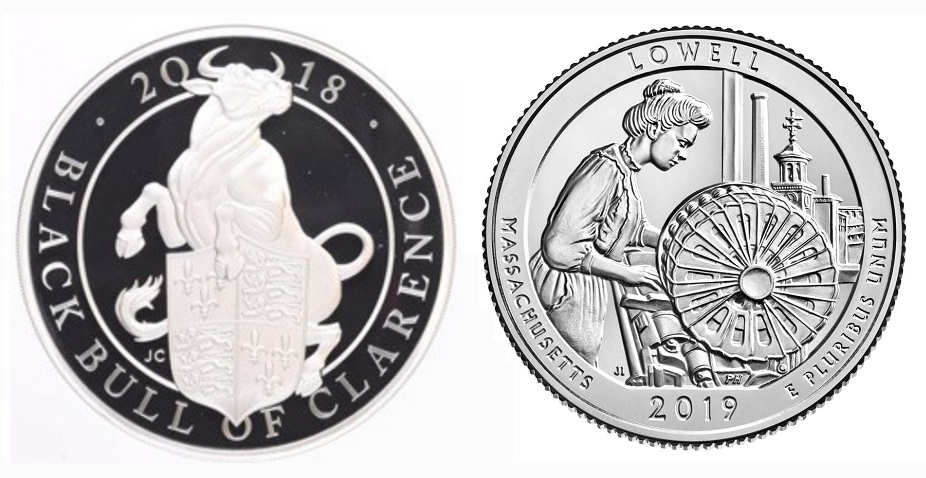 Examining the similarities and differences between the two series may shed some light on what modern coin buyers are looking for and on what kinds of coins do well in the marketplace. This information may also be useful to world mints contemplating similar series that run for an extended period — something already happening in the U.S.

The ATB series with 56 designs of U.S. national parks and monuments ran for 11 years, while the Queen’s Beasts ran for only five years and included 10 stylized designs of the heraldic beasts made into statues which were present for the coronation of Queen Elizabeth in 1953. The Queen’s Beasts series consists of more coins in total because it has so many variants.

The ATB coins, issued in bullion (frequently with Prooflike and deep mirror Prooflike surfaces, especially as the series continued) and vapor-blasted collector versions with a “P” mintmark, were first struck late in 2010 (and released the following year), will end early next year with the coin for the Tuskegee Airman National Historic site in Alabama designed by Chris Costello.

The series will end in 2021 after one more prior design is released in the various silver and gold Proofs, two more in the 10-ounce silver bullion, and three more in platinum. The series has since the beginning introduced each new design with silver and gold bullion coins but followed a different schedule for the Proof coins and the platinum versions.

An interesting similarity in the silver bullion versions of both series is how infrequently MS-70 examples are encountered, which is quite rarely for the two-ounce beasts (below 30 coins, for example, for the Griffin at NGC) and virtually never for the ATB coins (at NGC there are fewer than 20 coins total with four issues with 1-2 in this grade currently and the Frederick Douglass with 7). In their respective collector versions, 70-graded examples are seen much more often.

The Queen’s Beasts has been the most successful series from the Royal Mint in the postwar period after the Britannia coin series launched in gold in 1987 and silver launched in 1997. Overall, it has been more popular with buyers and collectors than the ATB coins because collectors tend to prefer shorter series and because the series offered so many options that buyers could pick a version or versions that fit their budget and interests and stick with it through the end without too much difficulty. The beasts also had the advantage of being issued mostly during years when spot silver prices have been in the $15-$20 an ounce range, apart from the final year when silver has averaged about $25. This has helped keep prices to a more affordable level. The popularity of these coins has been apparent from the frequent posting of comments from collectors in world coin blogs and message boards.

The beast series has also benefited from being easier to store since there are not as many different designs to a complete set, and it was possible to collect them in sizes of 1/4 and one ounce (in gold) and two ounces in silver and to house each one — even the 10-ounce silver bullion set — in its own custom wooden box.

With the ATB’s, on the other hand, there were some plastic albums for the bullion coins with one book per year and heavy wooden boxes designed for one year’s issues, which is a bulky and expensive way to store the whole set. And the only way to store the complete collector set assuming one even wanted to remove them from their mint boxes was to purchase an expensive, very large wooden case with removable trays that when complete contained 280 ounces, which one can’t simply leave around unsecured.

The ATB’s started off when silver was $30-35 an ounce and at a time when premiums for the bullion set were initially set artificially high by dealers , which, combined with production problems later, led the Mint to delay their release and force their distributors to sell them at lower premiums of only 10% over cost — a rare move designed to help collectors. Then silver continued rising until reaching just shy of $50 in April 2011, and then descending after 2014 to the $15-20 range.

Silver prices prior to 2014 resulted in buyers becoming underwater on many of the earlier collector issues that also had much higher premiums than the bullion coins (and whose prices were recently increased to $229, over $100 above their metal value of about $125) that are sold closer to the metal value. This situation has pushed some buyers to stop purchasing the collector coins and to focus on the bullion versions, which is why their sales have exceeded those of the “P” coins.

Today the 2010 bullion coins still command a solid premium, as do most of the 2012 coins, especially the Volcanoes and to a lesser extent Denali, and several other issues like the other two coins with 20,000-mintages — the 2017 Frederick Douglass and Ozark coins and others. On the collector side, it is mainly the 2012 coins that continue to do well as well as examples graded SP-70 of many releases.

Several recent collector coins have had low mintages, but they have not to date seen much in the way of a sustained premium. For example, when everyone thought the 2017-P George Rogers Clark coin would be the new low for this version, it briefly spiked, and the same happened for other coins such as the 2019-P Frank Church River of No Return issue. The 2020-P Salt River Bay coin may set a new low, but by now it does not seem to matter that much. Prior coins that are still in demand like the Volcanoes in both versions continue to be worth more.

The large number of coins to the series, the financial commitment to complete it, and the ebb and flow of silver prices have all contributed to an overall weakening of demand for the coins, though thousands have continued to see it through to the end. And those who focused on the bullion coins have done quite well since those have benefited from stronger demand than the collector coins. And if silver continues to march upwards in the coming years, their purchases, especially of the lower-mintage key and semi-key dates should do well.

It is noteworthy that the ongoing preference of most silver stackers for American Silver Eagle coins has likely depressed sales of the five-ounce bullion coins, which should bode well for future collectors since that kept mintages of the five-ounce issues lower.

Why the Beasts Have Outperformed

As for the Queen’s Beasts, they have benefited from rising bullion values, especially for the gold versions since spot gold increased by 50% from 2016 to present. In addition, many of the earlier issues are very hard to find today probably because their mintages were so low.

The 10-ounce silver bullion beasts are perhaps the big sleepers of these coins. Most could be purchased for between $200-250 when issued and today sell for much more (for example, the Lion in that size runs over $500) and are not easy to source. This is not only because spot silver increased but also because the mintages of many of the 10-ounce coins are unusually low.

The Royal Mint does not release mintage figures for bullion coins even after sales have ended, but some information was obtained through a request filed under the UK’s Freedom of Information Act of 2000 by a UK collector (@Pampfan) whose results were posted in The Silver Forum. This person was successful in obtaining some data for 2018 but was later turned down by the mint for additional data with the mint stating that like other mints it has a practice of not releasing mintages on bullion coins. Many collectors have pointed out that other mints like the U.S. and Perth Mints actually do regularly release this information.

As for the Proof coins, each has a preset mintage and since virtually all of them sold out, often quickly, those figures should in most cases be the same as the mintages. In addition, they were lowered substantially over the course of the series. For example, the 2017 Lion was set at 8,500 while the most recent coin, the 2021 White Greyhound of Richmond, was limited to only 3,800 coins. It will be interesting to see if the later Proofs do better because of their lower mintages.

Some of the larger ones (with mintages in some cases in the hundreds and lower) have come down in value compared to higher initial premiums, while the one-ounce silver Proofs have either increased or at least maintained their values, which is not something seen very often with modern silver Proof coins from most mints. In Proof 70, in particular, the one-ounce Proofs have done well, while some larger Proofs are today available for under issue price.

A final aspect worth considering is the designs and engraving. One similarity between the two series is that one side of each coin remained constant — the portrait of George Washington on the obverse of the large quarters, and the effigy of Queen Elizabeth II on the obverse of the beasts.

Another observation is that while the ATB coins are as iconically American as the Queen’s Beasts are quintessentially British, it appears the ATB coins are primarily collected by Americans while the beasts have been popular in the UK, the U.S., and elsewhere. The wide appeal of the beasts is related to their powerful and elegant designs and top-notch engraving and probably also has a lot to do with the fact that one artist — Jody Clark — created all 10 designs and the obverse, which gives them a more uniform look than the ATB coins. Not to mention that coins with mythical beasts on them tend to be a hit with collectors, which is why many private and world mints have issued such coins.

The ATB coins have a lot of great designs that many collectors admire, like the 2016 Teddy Roosevelt and 2013 Mount Rushmore coins, the 2014 Arches, the 2015 Blue Ridge Parkway coins, and others, and the designs undoubtedly work better on the large canvas of the five-ounce coins than on quarters since many are very detailed.

But there are also a lot of overlapping themes like coins with birds on them and of course many, many nature scenes that resemble each other to a degree — both being inevitable for a series focused on national parks. In addition, in the latter years of the program, the Mint, the artists, and the design review committees made a push to create more unusual designs perhaps best exemplified by the 2020 American Samoa bat coin.

Moving forward, the U.S. Mint must be aware that the sales trend on the collector side went from 27,000 coins sold for the first year to half that for the most recent coins, while bullion sales have been more steady for the reasons outlined here. If the Mint does decide to issue large silver quarters again or do fractional silver coins, they should be limited to bullion versions sold at a small premium over their melt value.