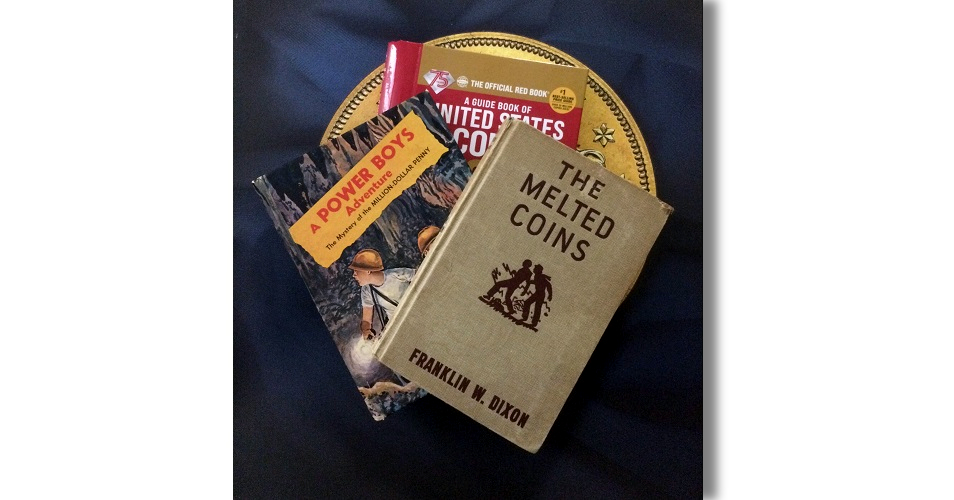 The Hardy Boys tackled a coin mystery in 1944 (The Melted Coins, Grosset & Dunlap, Inc.), as did the Power Boys in 1965 (The Mystery of the Million-Dollar Penny, Whitman Publishing Company). Hover to zoom.

I grew up in a household full of books. As a kid I was read to, and encouraged to read. Trips to the library were frequent and fun. Now I’m passing my love of reading on to my five-year-old daughter. We breezed past the “1,000 Books Before Kindergarten” a long time ago.

Collectors and dealers are always asking, “How can we get more kids interested in the hobby?” The idea of creating popular children’s books about coins comes up pretty frequently. I ponder this from time to time, and I’ve yet to hit on a surefire approach. Here are some thoughts, so you can be pondering it, too.

From a sales viewpoint: A commercial publishing firm (like Whitman) will always want to know that a book a) has an audience and b) will sell. Part of the challenge with a kids’ book about coins is how to define and predict the audience. It’s tempting to think, “There are 75 million children in the United States; even if I sell a book to just 1 out of every 5,000 kids, that’s 15,000 books.” A more realistic approach might be, “There are 300,000 active coin collectors in the United States; if I can sell a book to 1% of them, that’s 3,000 books.” And an even more realistic understanding of markets is that selling anything to 1% of any given audience is a major accomplishment.

This applies to potential sales of any “coin book about subject X” or “coin book appealing to audience Y.” The reality of numismatic publishing today is that publishers slice portions from a fairly small specialized market, rather than slicing from a large mass-market audience. 50 million Americans might watch basketball on TV, but did the United States Mint sell 50 million of its 2020 Basketball Hall of Fame commemorative silver dollars? No slam dunk. So far, sales have reached 100,000 coins but not much more. Basketball fans have many other souvenirs competing for their disposable income, and many other ways to celebrate their love of the sport. If coins aren’t already on their radar, the U.S. Mint has to work very hard to sell to them. A book on basketball coins would face the same challenges.

Of course, a financial profit isn’t the only reason for writing and publishing a coin book for kids. Forget about sales and profits for a moment, and do it for the good of the hobby. Now you can focus on all the normal considerations that go into a book: Who am I writing for? (Those 75 million kids in America are split pretty evenly: One-third age 0 to 5; one-third age 6 to 11; and one-third age 12 to 17—very different audiences.) Who is my typical reader? What will most appeal to them? What will they find useful or entertaining? What level of vocabulary should I use? Should I write a guide book (how to assemble and display a collection of coins)? or a history book (how coins started, what they embody, etc.)? or an art book? or? Would its contents and/or approach be different from a coin book targeted toward a beginning adult collector? Should it be a picture book? A textbook? And so on.

There are numismatic books that have mass-market appeal and sell in the tens (and even hundreds) of thousands of copies every year. Catching that lightning in a bottle for children is a worthy goal. I have more thoughts on the subject, to share another time. Now that you’re pondering it, maybe you do, too.

Dennis Tucker has served the hobby community as publisher of Whitman Publishing since 2004. Whitman produces many standard references relating to the art and science of numismatics (the study of coins and related objects). Numismatics is a field that touches on American financial and banking history, economics, artistry and design, technology, mining and metallurgy, political history, society, and culture. The company publishes other nonfiction books on the military history of the United States, in particular the Civil War, World War I, and World War II; the American presidency; and the U.S. Army, among other subjects.