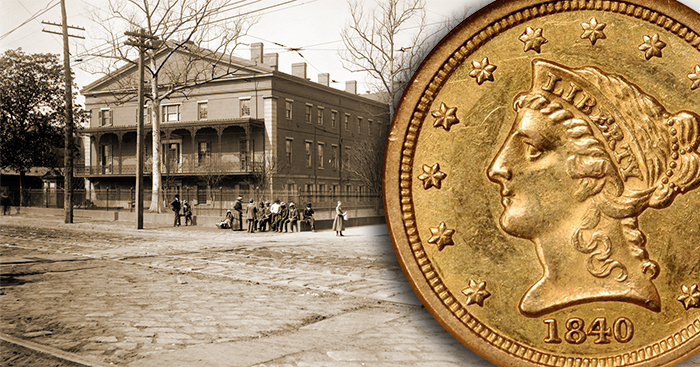 In the background, the New Orleans Mint, ca. 1890. (Historical photos courtesy of the Library of Congress. Coin images courtesy of Stack’s Bowers Galleries except where noted otherwise.)

Collecting gold coins of the United States can present the numismatist with a daunting task. Circulation coinage was produced in gold from 1794 to 1933, and the series is filled with rarities across all denominations. Many of these series consist of a large number of dates and mintmarks, as well as other varieties, and completion is virtually impossible for most denominations and types. As a result, many collectors decide to collect by type only, or to focus on a specific time period or mint. Such sets still provide plenty of opportunities to assemble an amazing collection of gold coins. In this article we will take a look at the Liberty quarter eagle series, which was produced from 1840 to 1907, and in particular those from the New Orleans Mint, struck from 1840 to 1857.

When it comes to branch-mint Liberty quarter eagles, a lot of the attention goes to coins struck at the Charlotte and Dahlonega mints. The denomination was not struck at the Carson City Mint, and the San Francisco Mint struck the denomination only intermittently, starting in 1854. Both the Charlotte and Dahlonega mints, located in North Carolina and Georgia, struck gold coins only, and for many years mintages were quite small, resulting in very scarce coins actively desired by specialists of Southern coinage. This leaves the New Orleans Mint, which struck the denomination in 12 of the years between 1840 and 1857 (an 1839-O was struck as well, but it is of the Classic Head design). These 12 coins provide a very interesting subset, and actually make up a gold set that can be completed, with many of these coins offering excellent value.

New Orleans, Louisiana, was the home of a branch mint of the United States from 1838 to 1861, when it was closed following the outbreak of the American Civil War. It reopened in 1879 and forever closed its doors as a mint in 1909. During its two stints producing coinage it struck a wide variety of denominations, ranging from the small three-cent silver piece to the large $20 gold piece. Quarter eagles were produced at this mint only during the pre–Civil War era, as quarter eagle production was mostly at the Philadelphia Mint after 1879 (with a few exceptions). The mint building is still standing to this day and currently houses the Louisiana State Museum. It was built in red brick and designed in the Greek revival style popular at the time it was constructed.

Due to its location and status as a trade port, New Orleans was selected in the 1830s as one of three locations to have a branch mint (Charlotte and Dahlonega were both located close to major gold fields). The city’s strategic location, its size (it was the fifth-largest city in the United States prior to the American Civil War), and its active trade meant that it was a perfect spot for a branch mint. In addition, large supplies of metal flowed through the city, much of which came from (former) Spanish colonies in Central America, so getting the gold and silver required for coinage was not a problem. The mint opened in 1838, and during many years it had a very large output of coins, sometimes surpassing the Philadelphia Mint in production figures. (Continued after the photos.)

The New Orleans Mint, as Photographed in 1897 by E.S. Gardner 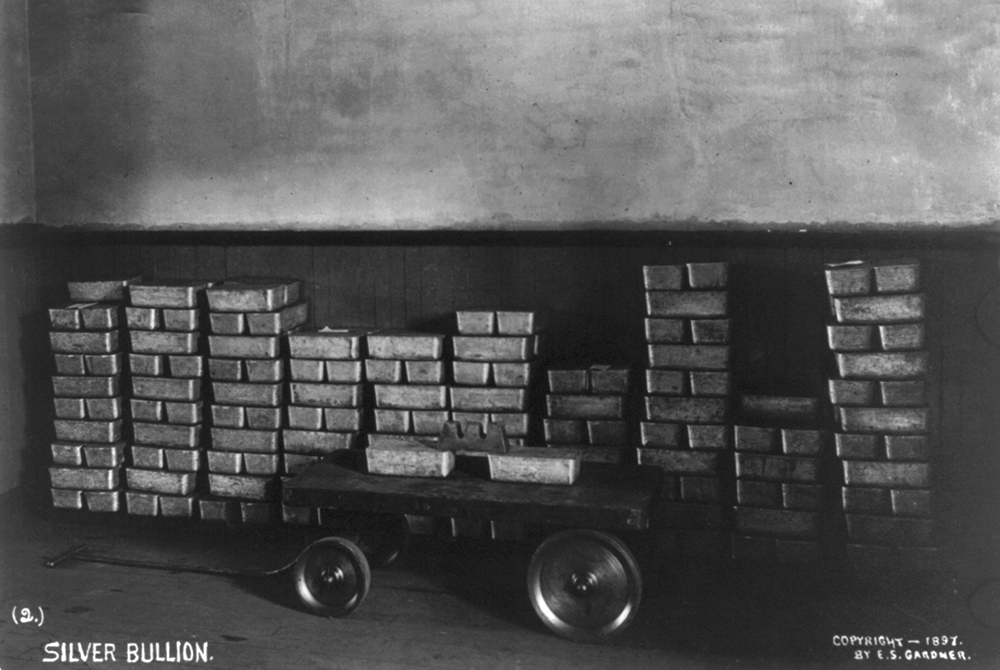 Silver bullion waiting to be turned into coinage. (Hover on each image to zoom.) 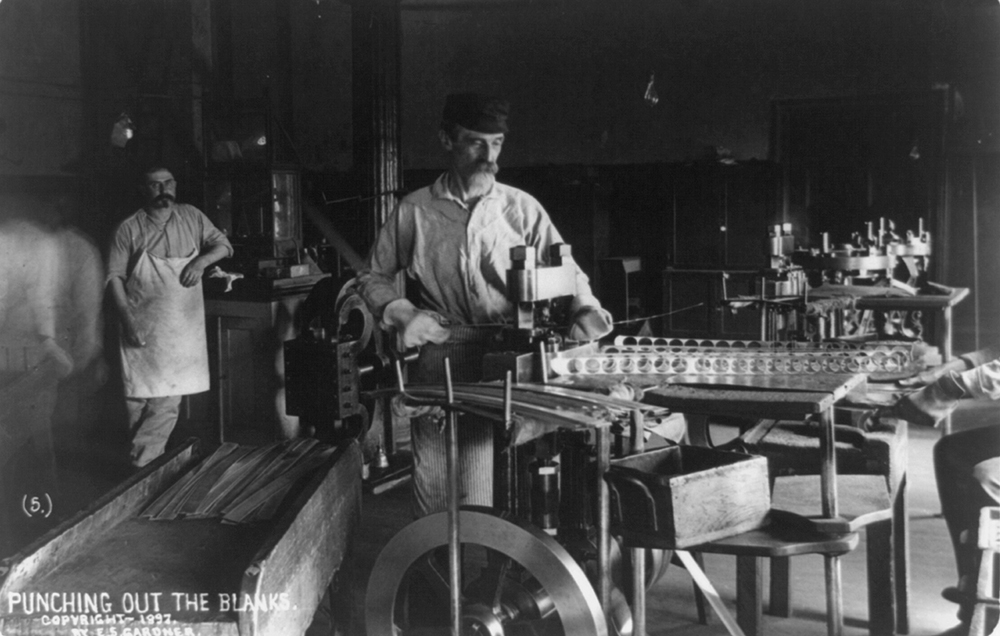 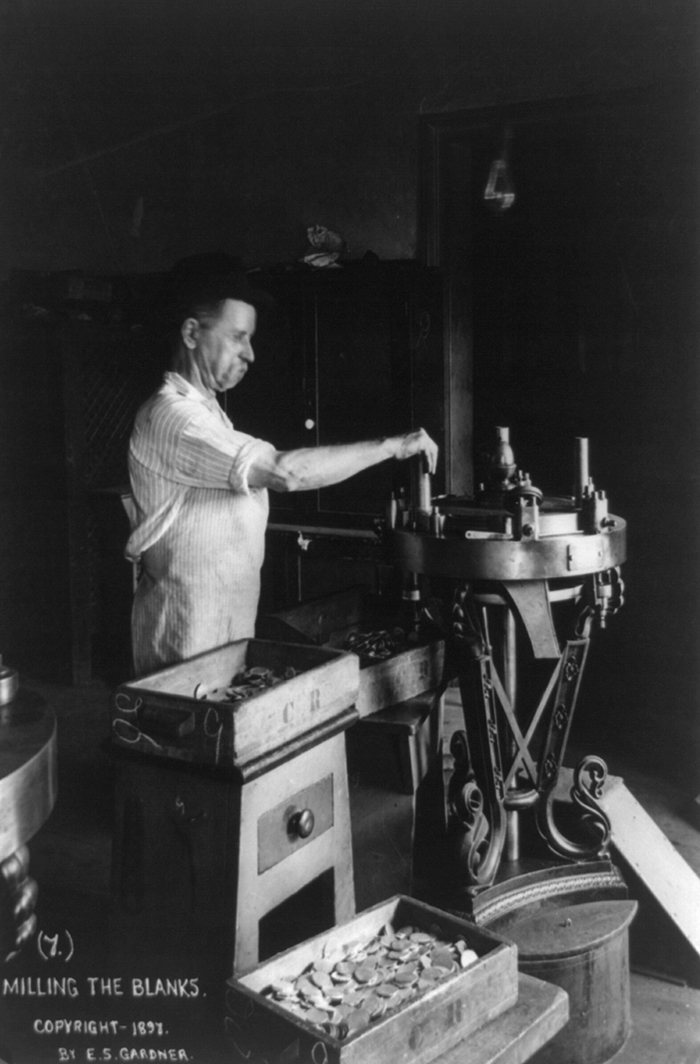 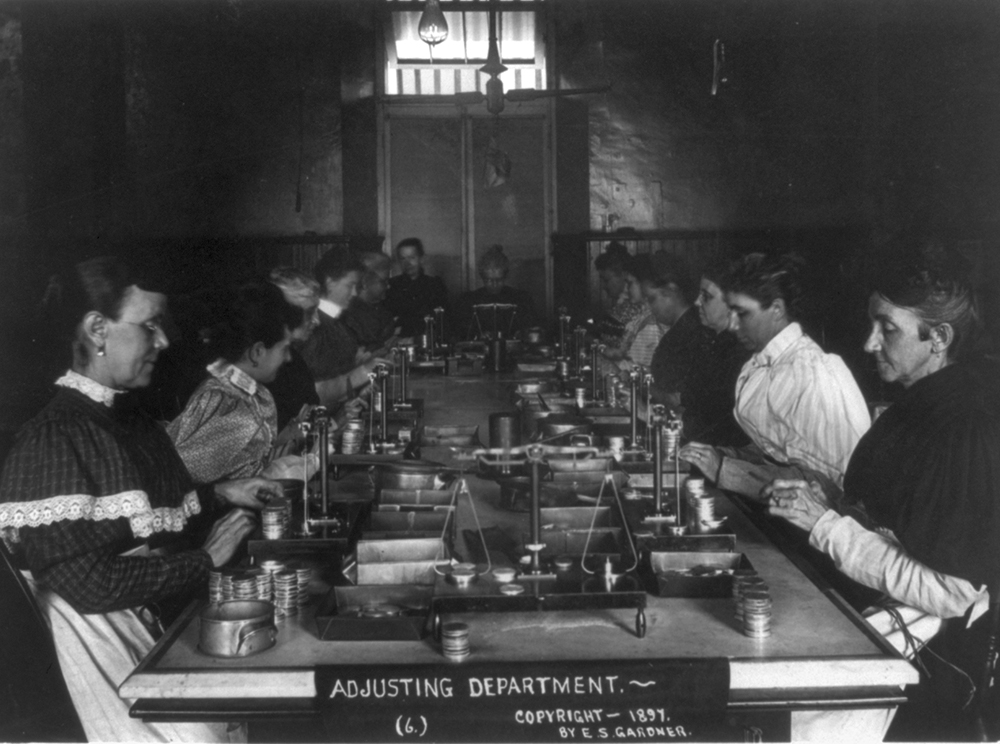 Adjusting the blanks for correct weight. 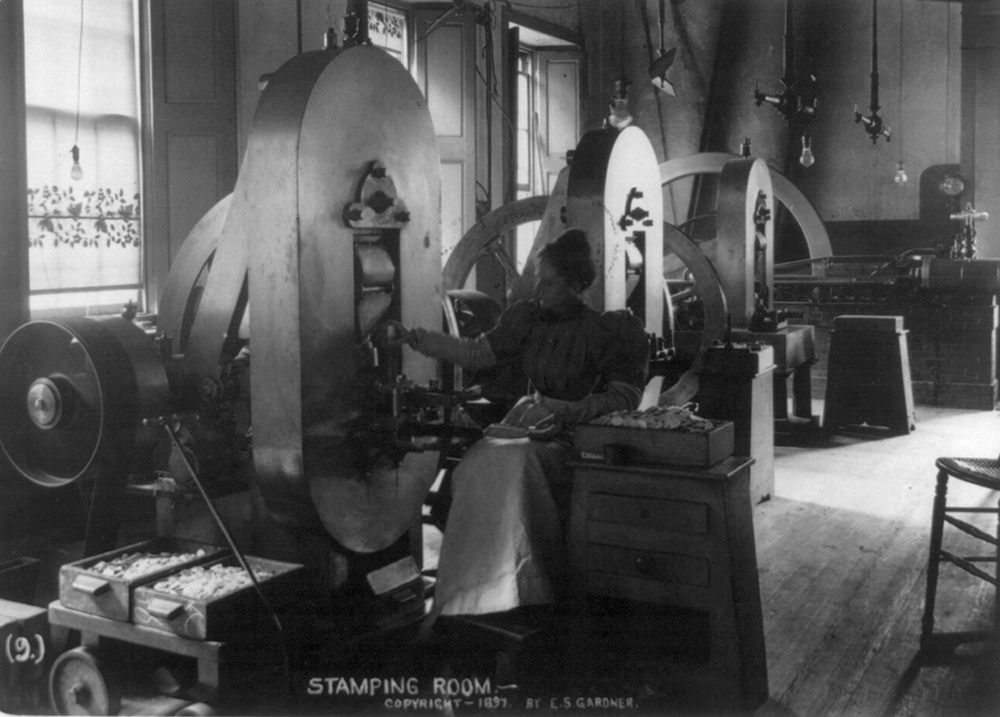 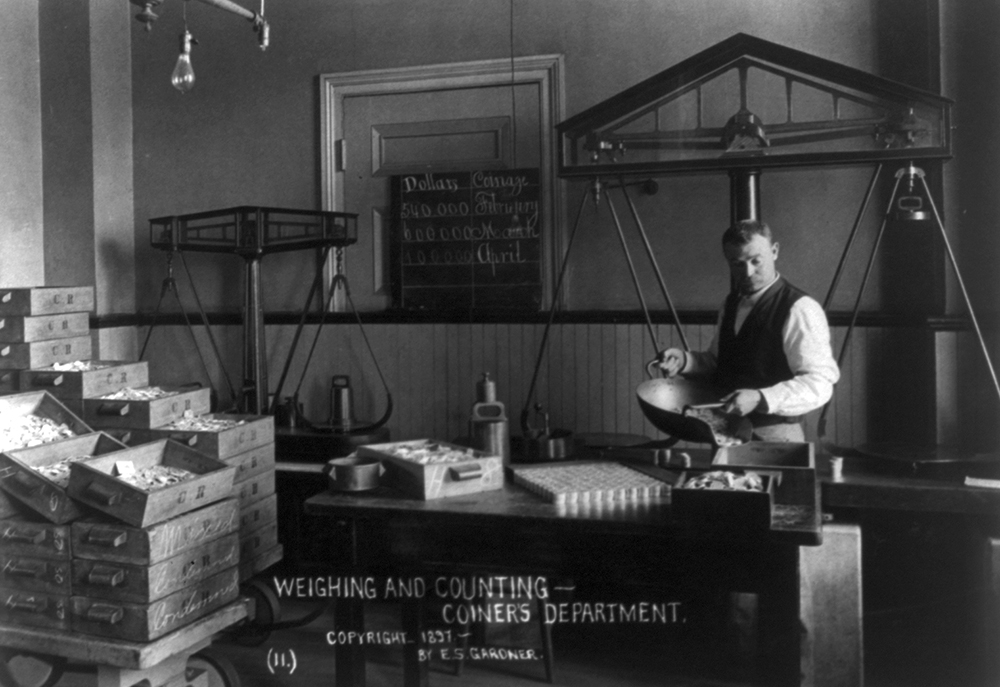 Weighing and counting the coins.

The Liberty Head quarter eagle (or $2.50 gold piece) was designed by Christian Gobrecht and introduced into circulation in 1840. At the time, it was the smallest gold coin in circulation, but in 1849 the gold dollar was introduced, creating an even smaller one. The design would be struck until 1907, making the series the longest continuously struck U.S. coin with the same basic design. In 1840, the New Orleans Mint struck a total 33,580 coins for circulation, and during the following 17 years mintages of this denomination at New Orleans varied widely. This ranged from a low of 4,000 pieces struck for the 1845-O to a high of 364,002 pieces for the 1843-O.

With the exception of the 1845-O, most New Orleans quarter eagles had relatively small mintages that were still larger than the quantities struck at the Charlotte and Dahlonega mints, but considerable smaller than that of the Philadelphia Mint. If you look at a price guide, you’ll see this reflected in the prices as well. That could be the end of the story, but if you delve a little bit deeper into the market to see what is available and what is offered at auction you will find out that the story is a little bit more complicated. (Continued below.)

Its status as a port on the Mississippi meant that gold coins struck at the New Orleans Mint spread far and wide, and the pieces circulated extensively. As a result of this, many pieces are much scarcer than the mintages would suggest. In fact, experts believe that for many dates coins of the New Orleans Mint are actually scarcer than their Charlotte and Dahlonega counterparts, which had smaller mintages. If you look for certain dates in the VF–EF range you will find that some of these coins are very seldom offered for sale. They simply do not exist in the numbers that the mintages would suggest. Prices, however, do not reflect this, and if you are willing to put some time into researching these coins, you will find that (for example) the 1842-O quarter eagle, with a mintage of 19,800 pieces, comes up less often for sale than the 1844-C, quarter eagle with a mintage of 11,622. Yet, the last PCGS VF-35 of the 1844-C sold for $2,115, while a similarly graded 1842-O sold for less than half that figure.

In the set of 12 coins the 1845-O is certainly the scarcest, with just 4,000 coins struck, but once again prices do not reflect this. This date does not come up for sale very often (it is estimated that perhaps just 50 to 75 pieces exist of this date in all grades), but when it does it still brings reasonable prices, especially in nice VF. Personally, I believe a set of 12 coins in VF–EF with the occasional AU is very possible, but thanks to the scarcity of these coins, it is still not going to be easy. However, compared to similar sets of Charlotte and Dahlonega coins, the price is actually very reasonable, making this one of those subsets of American coinage that is actually within reach for the average collector.