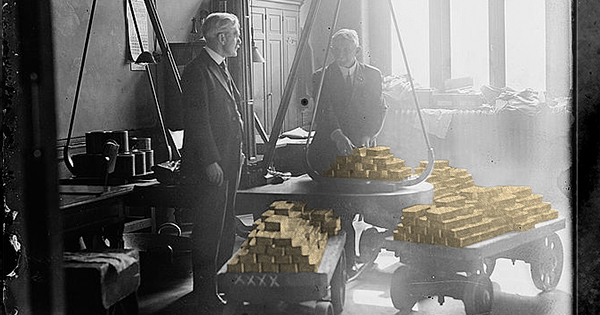 If you follow precious metals, you are probably familiar with James Rickards, best-selling author of books such as The Death of Money and Currency Wars, an advisor to the defense and intelligence communities on international economics and financial threats, and a well-known expert on monetary policy and bullish proponent of gold. He has been working for 35 years as an attorney and investment banker. 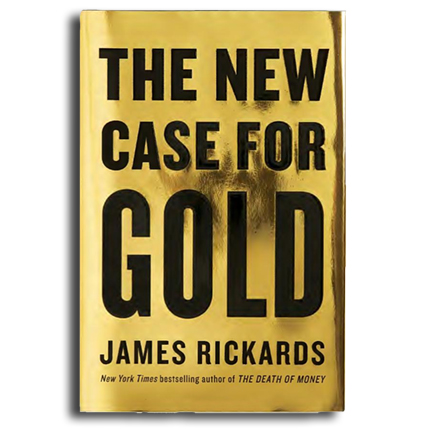 Rickards has now condensed his key views on gold into a short, easy-to-read volume, The New Case for Gold (Portfolio, 2016), which has several main purposes:

The Case Against Gold

Rickards begins by explaining the case against gold, which is based on several ideas: that gold is a “barbarous relic,” as John Maynard Keynes allegedly said; that there is not enough gold in the world to support growth, finance, and commerce; that gold was the cause of the Great Depression; and that gold has no yield and no intrinsic value.

First, the frequently cited Keynes comment about gold being a barbarous relic was never actually said by the great economist. Instead, he said that, “In truth, the gold standard is already a barbarous relic,” and as Rickard explains, he was referring to the specific gold standard that prevailed between 1922 and 1939, which was hugely flawed because it set the price of gold far too low, resulting in massive deflation and depression that began in Great Britain and eventually spread to the rest of the world. Moreover, at different points in his life, Keynes was actually a proponent of gold and the gold standard if set up correctly, so the way the quote has been used by gold critics is very misleading.

The key criticism typically leveled against the idea of a new gold standard is that, since there is a finite amount of mined gold in the world that grows very little each year, it would never be enough to support finance and commerce in the 21st century. But Rickards’s view is that “there is always enough gold for a gold standard, as long as you specify a stable, non-deflationary price.” And that is perhaps the key point to the entire book.

As for gold causing the Great Depression, the author cites the academic research of former Federal Reserve chairman Ben Bernanke and others, which showed that the gold supply never actually constrained the money supply during that period. The problem was instead a lack of confidence on the part of individuals and banks to borrow and lend, along with incompetent monetary policy from 1927 to 1931.

The intrinsic-value critique against gold is a rather curious one, since it is rooted in outdated Marxian economics. The intrinsic-value theory, first adopted by 19th-century British political economist David Ricardo and later by Karl Marx, holds that “the value of a good derives from the combination of labor and capital that went into its production.” Rickards notes that in 1871 Carl Menger introduced the concept of subjective value, which became a central tenet of the Austrian School of Economics. The subjective-value theory emphasizes “the value assigned to a good by an individual based on that individual’s needs and wants,” which is independent of an intrinsic value that comes from production and other costs.

Rickards then provides an interesting discussion on the role of gold at the Federal Reserve, and explains that we are already on a hidden gold standard. The gold that the U.S. government owns is valued on paper at $42.2222 per ounce, the amount it was marked to market in 1971 before Nixon ended the convertibility of the dollar with gold. But the current value of the roughly 265 million ounces, or about 8,000 tons, of gold that is owned is $315 billion based on a gold price of $1,200, rather than the $11 billion on the Fed’s books.

And this hidden asset, in Rickards’s view, is important because it is the thin foundation upon which essentially rests the world’s confidence in the dollar. Moreover, gold is still critical to the international monetary system, which is why central banks and governments around the world hold it in their vaults and have been adding considerably to their holdings in recent years, which is especially the case with China.

Despite what many of these officials say in public, they too clearly believe that gold is money. But, the author says, it is “highly convenient for central bankers to convince people that money is unconnected to gold because that empowers them to print all the money they want.”

The author goes on to discuss gold’s role in the world monetary system, which he says is moving from a “shadow gold standard” to a more formal one. One of the key points from this discussion concerns SDR’s, or special drawing rights, an international monetary reserve asset created by the IMF that supplements a member’s official reserves. SDR’s are used when there is a liquidity crisis like the one that existed in 2008.


As the author explains, the next time there is a meltdown of the global financial system, it will be too big for the Federal Reserve and other central banks to contain through additional quantitative easing. Those institutions will spend the next decade unwinding their current balance sheets, so while they could technically print more money next time, in reality they could not do that without destroying confidence in the system; thus, they will need to turn to SDR’s. But SDR’s “will be highly inflationary in dollar terms,” and the real value of dollar-denominated assets will be destroyed.

So then the question is raised: what happens if/when “people lose confidence in the IMF and SDR solution? Who bails them out?” The answer is that there is no one, and the IMF’s real strength lies only in its 3,000 tons of gold and the gold held by its members inside the United States and Europe. As he notes, the IMF is the third largest holder of gold in the world, and, although China’s true gold reserves are hard to pin down, they are believed to be the second largest after those of the United States.

There are far too many ideas in this short book to convey here, but another key one is that central banks can’t tolerate deflation and will do whatever it takes to create inflation—and one way to do this is to fix the price of gold in dollar terms at a higher level, as was done in 1933 when the U.S. government forced the price from $20.67 per ounce to $35.00. It did that to stop the dangerous deflation that existed at the time.

And this leads to much of the rest of the book, which makes the case for why you should own gold and how to go about buying it. In a nutshell, you need it as insurance and wealth protection against global financial crises and because it is an asset that does well in periods of both deflation and inflation. When prices are rising as they did in the 1970’s, the price of gold goes up, too, and when there is true deflation, the price will go up by government dictate.

In addition, gold offers protection against two recent nefarious trends the author covers: the war on cash and negative interest rates. Moving more and more toward a cashless society and digital currencies gives governments the ability to freeze accounts, confiscate your money, etc.—but cash and gold can be used to defeat those efforts.

Rickards’s comments on the often-discussed idea that the price of gold is manipulated by governments and banks are quite interesting. For example, he says the frequent argument that the Fed wants a lower gold price is wrong; what it actually wants is a lower dollar, since that helps U.S. exports, and it is not so concerned about gold’s increasing in value as long as it does so in an orderly manner. And as the author says, efforts at manipulating the price of gold eventually fail.

The final sections of the book focus on an area in which the author has done a lot of work (including advising the U.S. government): using complexity theory and mathematical models of systemic risk to estimate the probability of the collapse of the international monetary system, which, based on his research, will be in “the not-distant future.”

That is certainly a very troubling conclusion, but Rickards believes that by following his recommendation of putting 10% of your wealth in gold and holding it for the long term, you will be able to weather the storm. And he says we should buy it now before panic sets in later, when only large institutions and central banks will be able to obtain gold and small investors will be shut out. For example, as he points out, if large institutions were to increase their gold allocation from their current 1.5 % to 5%, there is not enough gold in the world for them to do that.

He went on to explain that in his view, other countries have the gold, which appears to be in reference to the moves by China, Russia, and other nations in recent years to vastly expand their gold reserves and gold holdings.

It is also worth recalling that Trump has long been bullish on gold, even accepting gold bars as payment for rent on one of his buildings in September 2011 from APMEX, which was setting up a new office in New York. In addition, throughout the campaign he voiced support for new tariffs on countries we trade with, and for “taking down” the value of the dollar to boost trade, which would likely be bullish for gold, if implemented.

But after a momentary spike the night he was elected, gold then began a massive move downward that has continued to this day. This decline is believed to be due to a surge in the dollar, and to hope that Trump will pursue pro-business policies that will boost economic growth.

And on November 28 Trump held a meeting with the former CEO of BB&T bank, John Allison, who has expressed interest in a new gold standard.

It remains to be seen what economic and trade policies the Trump administration pursues and how those policies, and congressional action on that agenda, will end up impacting gold in 2017 and beyond.  ❑

Louis Golino is an award-winning numismatic journalist and writer specializing on modern U.S. and world coins. His work has appeared in Coin World, Coin Week, The Numismatist, Numismatic News, and Coinage, among other publications. His first coin-writing position was with Coin Update.