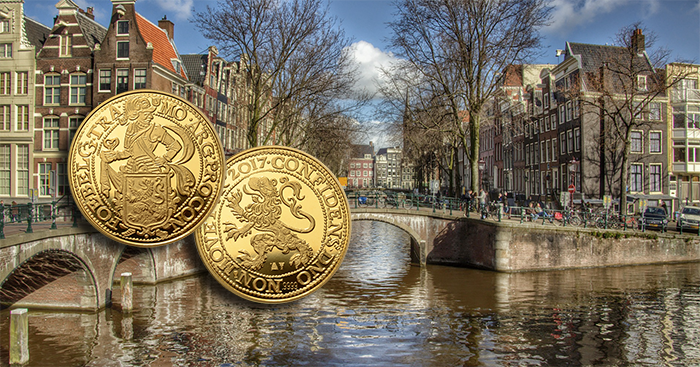 The Royal Dutch Mint have unveiled their newest silver and gold 1-ounce coins, which are based on one of the world’s most well-known and trusted trade coins of the late 16th century. The famed lion daalder (or leeuwendaalder) was first minted by the Province of Holland in 1575 as a means of increasing trade between their many trading ports and outposts from Asia to the Americas, from Africa to Australia, and everywhere in between. However, these very coins were themselves based on an even more popular and well-known coin: the Joachimsthaler of Bohemia, minted from 1519. It was important for the new Dutch provincial coin (whose very name, daalder, was a derivative of the word “thaler”) to resemble closely these well-known coins so Dutch traders could benefit from the popularity and trust enjoyed by Joachimsthalers, both locally and internationally. Early daalders were cut out of silver planchets that were not perfectly round and were relatively thin, so their strike was not very detailed and the image on both sides was less visible than hoped for. In time the coins improved in quality as well as in reputation.

With a weight of 26.79 grams of .750 fine silver, the lion daalder was also popular in the Dutch East Indies as well as in the Dutch New Netherlands Colony (present-day New York). After the British became the dominant power in the New World, the lion daalder remained in circulation with a recognised value of 4 shillings and 6 pence. Besides the popularity of the Spanish “piece of eight” (or 8-reales silver coin), which also widely circulated in the United States from the late 1700’s, it is unmistakable that the lion daalder greatly influenced the American silver coinage—especially the name of the new country’s currency, the dollar, which was first minted in 1794.

During the mid-17th century, the leeuwendaalder became so widely used and recognised worldwide, it pushed many local coins out of their own markets. Aside from the Balkan countries, the lion daalder was the standard form of commerce in regions and states such as Anatolia, Syria, Egypt, and Northwest Africa for over a century. It was not until 1713, when the leeuwendaalder was no longer minted, that it was finally surpassed by the Maria Theresa thaler from 1751 onwards. Despite their lack of production, the leeuwendaalder remained legal tender for some time in the Levant. 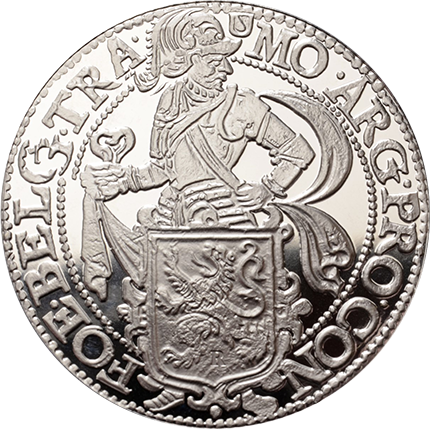 The Royal Dutch Mint’s first modern lion daalder restrikes are based on the design originally issued in Utrecht in 1617, and mark the 400th anniversary of this particular provincial issue. Included on the obverse is a standing knight. In front of his legs rests a shield bearing a lion in what is known as the rampant position. (This lion is found on both the Dutch and Belgian coats of arms.) Within two circles of beadwork around the rim is the legend MO. ARG. PRO. CONFOE. BELG.—short for MONETA ARGENTEA PROVINCIARUM CONFOEDERATUM BELGICARUM, or “silver money of the Province of the Netherlands”—followed by the letters TRA (representing Utrecht). 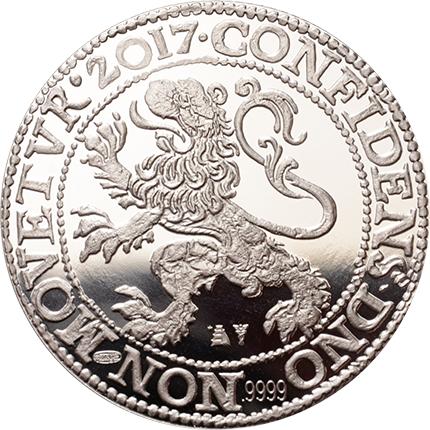 The reverse displays the same heraldic lion in a larger size, and as with the obverse design it has two circles of beadwork around the rim enclosing a legend—in this case, the date of issue, 2017, and the motto of the United Provinces, CONFIDENS. DNO. NON. MOVETVR, or “Who trusts in the Lord is not moved” (“DNO” is an abbreviation of “Domino,” or “Lord”).

The following informative video, narrated by Rene van Dijk (commercial director of the Royal Dutch Mint) and  describing the coins’ production, can also be viewed on YouTube:

The gold pieces and silver piedfort versions are minted in very low quantities. The Royal Dutch Mint will announce at a later date whether the new lion daalder is the beginning of a new series of coins.

Please visit the website of the Royal Dutch Mint for information on this and other coins the mint offers.   ❑
Share: