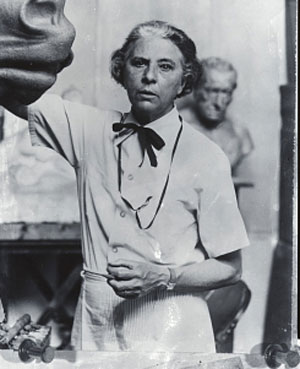 One of the most prolific female sculptors of the early 20th century, Laura Gardin Fraser is known in both the art and the numismatic worlds. Besides numerous medals she is probably best remembered for her designs of several classic commemoratives, some of which were designed together with her husband, James Earle Fraser, whose life we covered in a previous article of this series. As we will see, his wife certainly should not be considered to be the lesser artist of the two, and together the Fraser family helped shape early 20th century coinage in artistic ways that have never been seen before or after.

Laura Gardin was born on September 14, 1889 in a Chicago suburb. She was one of three girls born to John Emil and Alice Gardin, who had met in Stuttgart, Germany. Both were born in the United States but were living in Germany at the time, although John was attending Stuttgart University and had lived in Germany since he was a little boy. After they were married they returned to the United States and settled in the Chicago area, where Laura was born.

Early in her life, Laura showed a keen interest in the arts, especially sculpting in clay, which she took on under the guidance of her mother. While her mother most enjoyed music and painting, sculptures appeared to have been the true love and talent of young Laura, who would continue making sculptures for the rest of her life.

The Gardin family moved to New York when Laura was still young, and besides the summers which were spent at the holiday home in New Jersey, Laura would continue to live in New York City throughout her life. She graduated from high school there in 1907, and soon thereafter started work at the Art Students’ League of New York. It was there that she would meet her future husband, James Earle Fraser, who would also educate her in sculpting. The couple would marry in 1913.

We have written about James Earle Fraser before, as we have about some of the commemoratives that he and his wife designed, whether on their own or as a couple. Because of this, we will focus on some of the other works by Laura Gardin Fraser, as she would be known after her marriage and how she is known by the numismatic and art worlds.

Laura’s artistic talent is obvious from her commemoratives but is also proudly featured on the medallic works that she created during her lifetime. A complete list and description of medals that she made is beyond the scope of this article, as she created dozens of medals for a wide variety of organizations and commemorations. Many of her medals feature animal themes; she was known as an animal lover from early on in her life as the summers spent in New Jersey also meant time spent with animals.

One of her earliest commissions, however, and the first one that we will cover here does not feature any animals. Known as the Better Babies Medal, it was a medal awarded by the Woman’s Home Companion Magazine in 1913. Struck in bronze on 51 millimeter planchets (a single gold example on a smaller planchet is reportedly known) it features two babies sitting on a blanket on the obverse, while the reverse shows the words “BETTER BABIES MEDAL” and “AWARDED BY THE WOMAN’S HOME COMPANION” followed by the name of the recipient in a cartouche. Near the bottom is LAURA GARDIN/SCULPTOR. This is one of the few major medals made by Laura before here marriage to James Earle Fraser, and thus one of the few works that only show her maiden name. The medal is considered to be the only truly feminine work by Laura Gardin Fraser.

Another popular and very appealing (in the author’s opinion) medal is the 1928 US Congressional Gold Medal in commemoration of Charles Lindbergh. It features a right-facing bust of the famous aviator. LINDBERGH is near the top of the obverse, with the words “MEDAL OF THE CONGRESS” along the bust. In very small letters we see “ACT MAY 4 1928” near the bottom of the bust. Below it is LAURA GARDIN FRASER/SCULPTOR and UNITED STATES OF AMERICA. The reverse features a naturalistic view of an eagle in flight, with the rising sun near the bottom and stars on top. This medal, struck in bronze, is very scarce and not easy to find. 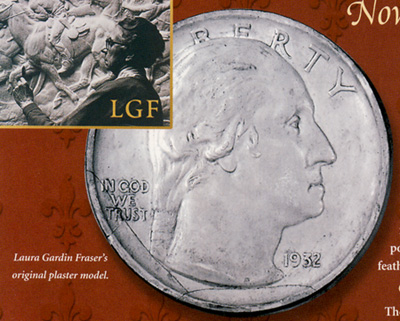 In 1932 Laura Gardin Fraser designed the George Washington Bicentennial medal, which was distributed widely and is among the most available medals by Fraser. That, however, was not the only George Washington related item that Laura Gardin Fraser designed in 1932. That year a contest was held to decide on the design of the new quarter, which would be issued to commemorate the bicentennial of George Washington’s birth. With her design she won her contest, but Andrew Mellon, then Secretary of the Treasury, selected a design by competitor John Flanagan. This design would become known as the Washington Quarter, and in much modified form, continues to be struck to this day. 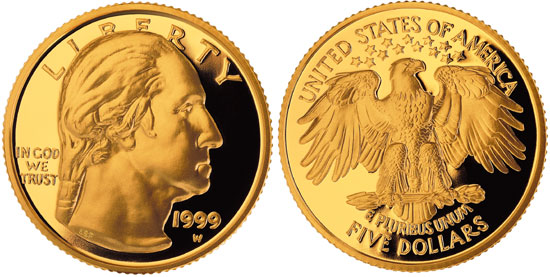 Laura Gardin Fraser’s design would not be lost forever. In 1999 the United States Mint issued a gold $5 commemorative featuring Laura Gardin Fraser’s original design for the 1932 Washington Quarter. It featured a bust of Washington, facing left. IN GOD WE TRUST is in the left field, while the 1999 date is in the right obverse field, with the W mintmark (for West Point) below it. Along the top is LIBERTY, partially obscured by the head of George Washington. The reverse featured an eagle with its wings spread. Thirteen stars (for the original thirteen colonies) are above the eagle, as is UNITED STATES OF AMERICA. E PLURIBUS UNUM is below while the denomination, FIVE DOLLARS, is along the bottom rim (the only significant change from the original design). The design has quite a few similarities to the issued Washington Quarter by Flanagan but is still distinctly different, and as some would argue, it is superior to the issued design, although that is as with so many things a topic for argument. 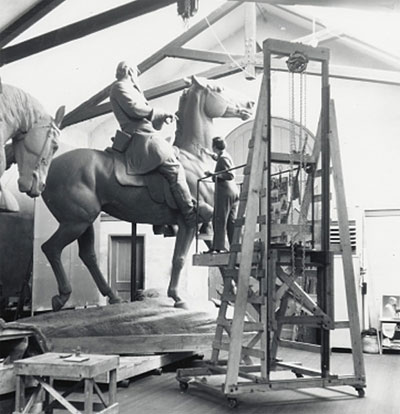 While the number of statues and sculptures is inferior to the coins and medals Laura Gardin Fraser designed they are in no way inferior in design. Among her most famous works is the dual equestrian statue of Generals of the Confederate Army Robert E. Lee and Stonewall Jackson, which is located in Baltimore, MD. Fraser was awarded the project in 1935 and it was dedicated in 1948 and the statue remains a prominent feature of Charles Village to this day.