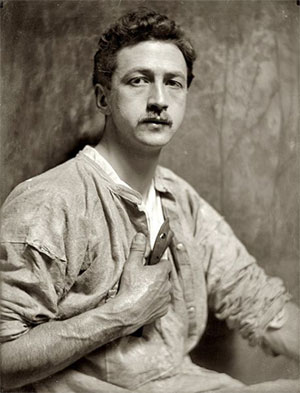 During the past 225+ years there have been a large number of artists, sculptors, and others who have been responsible for designing the coins that so many Americans have used in everyday commerce. Many of these should be of some familiarity to numismatists, such as George T. Morgan (who designed the silver dollar bearing his name) and Victor D. Brenner (who designed the Lincoln cent). Others are lesser known, such as Anthony de Francisci, who was responsible for the Peace Dollar. When it comes to classic commemoratives, those struck between 1892 and 1954, there are plenty of unfamiliar names added to the list of people that only designed a single coin. But there is also one man who is responsible for a number of classic commemorative issues who did not design a single regular issue. His name is Chester Beach, and in this article we will take a closer look at this man and his work.

Chester Beach was born on May 23, 1881 in San Francisco, CA. Relatively little is known about his early life, but at a young age he must have acquired an interest in art as he enrolled in the California School of Mechanical Arts when he was eighteen years old. He did not stay there for any length of time, however, as he soon enrolled in the Mark Hopkins Institute of Art, specializing in Jewelry design. Like many young American artists at the turn of the century, he moved to Paris, studying at the Ècole des Beaux Arts, before returning to the United States and opening a studio in New York City upon his return in 1907. He would remain in that city for the rest of his life, first working on 10th street and later relocating to 17th street, although he did spent time in Rome, Italy with his wife Eleanor Hollis Murdock, whom he had met in Paris during his time there. They would have three daughters, Beata, Natalie, and Eleanor, the latter who would become known for founding countless non-profit organizations during her lifetime. 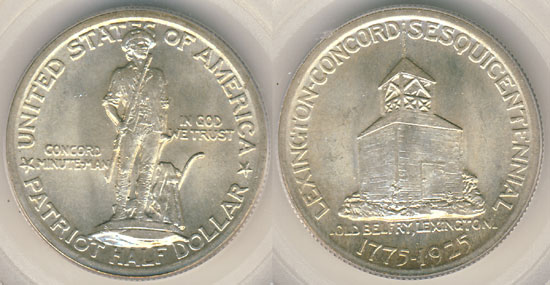 In the art world, Chester Beach is mostly known for his busts as well as medals, and in the numismatic world of course for the four commemorative coins he designed or helped design. These are the 1923-S Monroe Half Dollar, the 1925 Lexington-Concord Half Dollar, the 1928 Hawaiian Half Dollar (modeled after designs by Juliette May Fraser) and the 1935 Hudson Half Dollar. Two of these (the Hawaiian and the Hudson) are considered to be key-dates within the classic commemorative series and are highly prized by collectors, and the Lexington-Concord is a popular issue with collectors because of its historical subject matter. 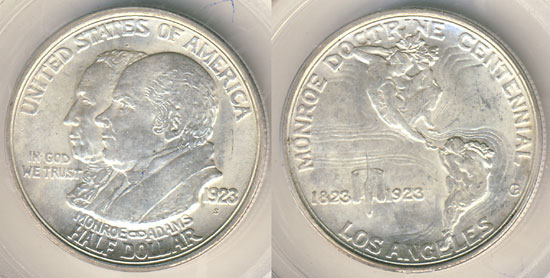 Chester Beach was not clear of scandals when it came to commemorative issues. The 1923 Monroe Doctrine Commemorative Half Dollar, which he designed with assistance of James Earle Fraser, featured a map of both North and South-America. The map was displayed as two stylized female figures, the upper holding an olive branch (signifying peace) in her left hand and her right hand stretching down, meeting the hands of the lower figure at the approximate location of the Panama Canal. The lower figure holds in her hand a cornucopia, or horn of plenty. This reverse design is similar to a 1901 logo that Raphael Beck designed for the 1901 Pan-American Exposition held in Buffalo, N.Y. that year (the original logo lacks the olive branch and the cornucopia). Fraser, a member of the Fine Arts Commission responded to Beck, saying that he had been the one who had suggested the design to Beach and that he had never seen it before being contacted by Beck about the matter. Whether this is true or not remains to be disputed, as Fraser himself had been involved in the Pan-Pacific Exposition, designing a medal honoring his mentor Augustus Saint-Gaudens.

Also a renowned sculptor, one of Beach’s earliest artworks was created for the 1913 Armory exposition held in New York City, called the Unveiling of Dawn, a marble statue now in the collection of the Metropolitan Museum of Art. Other statues are too numerous to mention, but many were busts, while the female nude (often in allegorical form) was also a favorite subject of Beach. But of particular interest to numismatists are the many medals that he designed, many for the Medallic Art Company of New York City.

One of the medals designed by Chester Beach is definitely worth a closer look. This is the 1919 medal issued by the American Numismatic Society commemorating the Peace of Versailles, one of the treaties that ended World War I. A scarce medal, a total of 318 bronze and 113 silver medals were made, each individually numbered on the rim. Beach’s design featured semi-nude figures representing War and Victory walking along with Justice seated on a winged Pegasus. A female represents victory while both War as well as Justice are represented by males. The ground on which the figures are standing could be interpreted as a serpent, perhaps signifying the losing side of the war. The reverse of this medal, which is quite scarce yet relatively affordable (especially so in bronze) featured a view of Versailles surrounded by the sun and a laurel wreath. 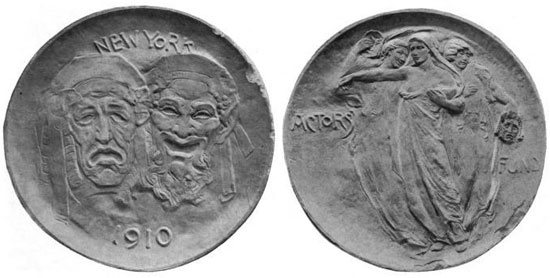 The medals designed by Beach, including the Peace of Versailles medal were often executed in a low relief, making them not as popular of a medalist as some of his contemporaries. Another famous medal were this feature is seen is the 1910 Actors Fund Medal of Honor, which continues to be awarded to this day to individuals and organizations that have enriched the entertainment industry. The design features two comical heads on the obverse, while the reverse features three figures, presumably actors. The first award, in 1910, was awarded to President William H. Taft, while other recipients include Ed Sullivan and Ronald Reagan among others.

In 2009 Stack’s sold at auction a large collection of letters, documents and related items from the studio collection of Chester Beach. This interesting collection, extremely valuable to collectors and researches, included such items as letters relating to coinage design and sketches for the Lexington-Concord commemorative half dollar. While these items have now been dispersed, the American Numismatic Society also has a small collection of such material in its library. Other documents are retained in the Smithsonian Institution.

Chester Beach passed away after a long illness on August 6, 1956 in New York State at the age of 75. While largely forgotten by the general public, his works of art have become a valuable memory to the (in particular medallic) arts of the first half of the 20th century. The fact that his papers and related items are still retained in the Smithsonian Institution certainly signifies the fact that Chester Beach was indeed an important, albeit somewhat underrated artist, who will forever be remembered by numismatists for his design of some of the most popular commemorative coins.