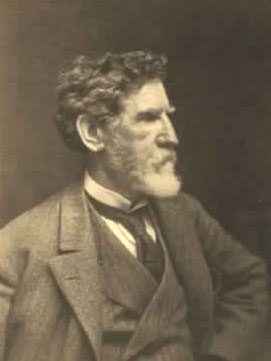 Augustus Saint-Gaudens is one of the most prominent visual artists that the American numismatic world has known. Forever linked with the double eagle design that bears his name (struck 1907-1933), his work would begin the realization of Theodore’s Roosevelt’s vision of an American coinage as grand and beautiful as that of the Ancient Greeks. Shortly before his death, Saint-Gaudens would provide new designs for the $10 and $20 gold pieces, the last of those denominations to be struck for general circulation and still considered to be among the most beautiful and popular of all of America’s gold coins. Besides his designs for these two coins and various medals, Saint-Gaudens is also known for a large number of statues located throughout the United States.

Augustus Saint-Gaudens was born as the third son of a French-Irish couple on March 1st, 1848 in Dublin, Ireland. Just six months after his birth, the family took a ship from Liverpool to Boston to start a new life. Eventually the family ended up in New York City, living in a number of different neighborhoods, with his father expanding the family’s shoe business over time. The move to the United States would prove to be a successful one for the family, as the shoe business expanded slowly but steadily.

For the young Augustus Saint-Gaudens, it would be a blessing that his father’s shoe business was a successful one, as otherwise it might never have been possible for him to pursue a career in the arts. First of all, he had to opportunity to go to school until the age of 13 (not all that common in antebellum America), at which age his father asked him the often heard question of a parent to a child: “What kind of work would you like to do?” At this young age Augustus must have realized that a career in art would be his preference and his parents appear to have supported this wish, as his father secured him an apprenticeship with a fellow Frenchmen in New York City as a cameo-cutter. 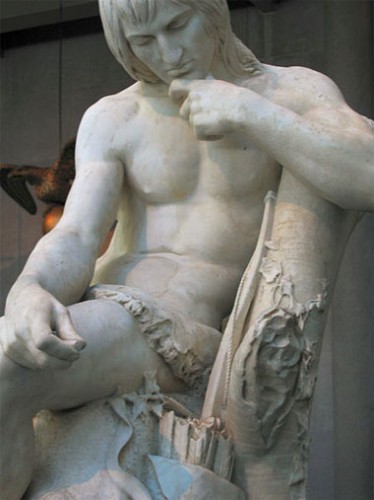 Hiawatha by Augustus Saint-Gaudens. Photo by Postdlf from w

At age 19, the now adult Augustus left for France, the homeland of his father, which he had never visited before. He studied in Paris, further expanding his knowledge of the arts, both through cameos as well as drawings he made as studies. His breakthrough as a sculptor came after he moved to Rome, when he designed Hiawatha, a small statue of an Indian boy, as well as a number of busts of people from the classical period. Upon his return to the United States after an absence of eight years, he continued working as a full-time sculptor, designing numerous Civil War Memorials, making him one of the most prolific sculptors in United States at the time. 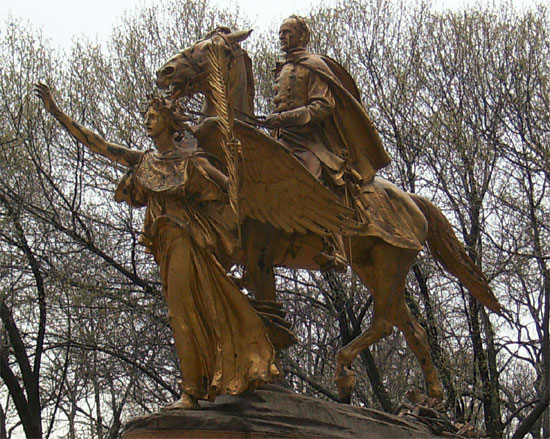 From the 1880’s onward Saint-Gaudens spent much of his time in a house in Cornish, New-Hampshire, in what would become a so-called artist colony and eventually known today as the Saint-Gaudens National Historic Site. His work as a sculptor continued here, with some of his most well-known work of this period being a statue of Abraham Lincoln (he would produce another one near the end of his life, although his work shop had to finish that particular one after his death), numerous Civil-War related memorials with one of the most famous being a statue dedicated to Union General William Tecumseh Sherman, which includes a figure of Victory striding forward, similar to the figure of Liberty that would later appear on the double eagle, and other small items such as medallions. 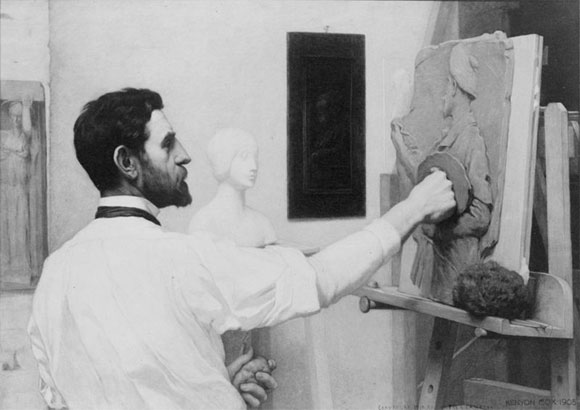 The two American gold coins that Saint-Gaudens designed towards the end of his life, as mentioned before, were the collaboration between the mind of President Theodore Roosevelt and the artistic skill of Augustus Saint-Gaudens. Unfortunately, Saint-Gaudens would never see the coins in circulation during his life. He passed away on on August 3rd, 1907 at the age of 66, as a result of colorectal cancer, which had been diagnosed in 1900 and reduced his capabilities as an artist over the years. Numismatists will be familiar with the story of the creation of these two popular coins. Many will be a little less familiar with other (somewhat limited in quantity) numismatic material that he created during the course of his lifetime. 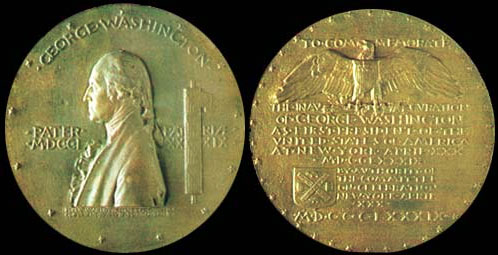 A more famous and important medal that Augustus Saint-Gaudens designed (in collaboration with Charles Barber) is the Award Medal for the 1893 Columbian Exposition. Cast in bronze (but also known gilded, which were the examples perhaps given away to first prize winners) it is a large medal (76.3 millimeters in diameter, which is about double that of a Morgan Dollar) personally inscribed to the receiver (often companies that assisted in the fair) on the reverse. The obverse features a standing Christopher Columbus, arriving in the Americas, in an elaborate design that immediately catches the attention. The obverse was designed by Augustus Saint-Gaudens, whose name is near the bottom rim as “AVGVSTVS SAINT GAVDENS FECIT”, meaning “made by Augustus Saint Gaudens”. The reverse features an intricate design with a ship in the background (no doubt meant to signify Columbus’ ships on his first voyage to the Americas), two torches on a side of a box that includes the text “WORLD’S COLUMBIAN EXPOSITION / IN COMMEMORATION OF THE / FOUR HUNDRETH ANNIVERSARY / OF THE LANDING OF COLUMBUS / MDCCCXCII . MDCCCXCIII / TO” with the name of the recipient following in a little square. Interestingly enough Saint-Gaudens initially designed the reverse, but his design depicting a nude boy was rejected by the Treasury Department, and Charles E. Barber was asked to design the reverse instead. These medals are very scarce and generally sell for $300 and up, with the value increasing exponentially if the original aluminum box is included. 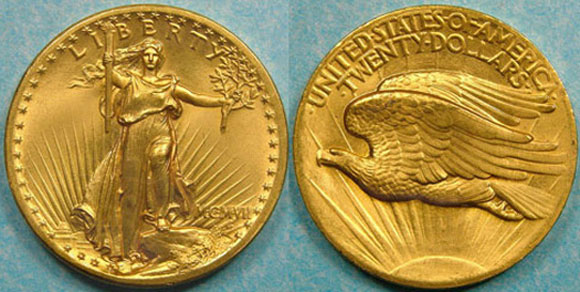 Even though the workmanship and creativity of Augustus Saint-Gaudens is limited on numismatic items, he has left an everlasting mark on American numismatics with his design for the double eagle. The obverse continues to be used on the annual bullion coins struck by the United States, guaranteeing that more and more Americans will continue to become familiar with his work. His statues are found in urban centers of America and offer a brief glimpse into America’s past to both art lovers as well as casual passersby. Even though the medals he designed are relatively limited in number they offer another look into the career of one of the most important American artists of the 19th century.