World paper money is an area of numismatics that has seen a substantial increase in interest over the last couple of years. With a rich history going back to the 14th century, this should not come as a surprise. Paper money collectors have a wide variety of possibilities available to them, and their collections can be organized by country, theme, and even material. In this article, we will take a look at one long-running series of paper money that is popular with collectors worldwide: the Irish Lady Lavery, or “Series A” Legal Tender Notes of 1928 to 1977.

Following the establishment of the Irish Free State in 1922 and the enactment of the Currency Act in 1927, Lady Lavery banknotes were issued in a total of seven denominations; each had a slightly different design containing either a head portrait (10 Shillings, 1 Pound, and 5 Pound) or a half-length portrait (10 Pounds, 20 Pounds, 50 Pounds, and 100 Pounds) of Lady Hazel Lavery.

Born in Chicago on March 14, 1880 as Hazel Martyn, Lady Lavery was the second wife of portrait artist Sir John Lavery. John Lavery designed this long-running series of banknotes using the portrait of his wife as an allegorical representation of Ireland. 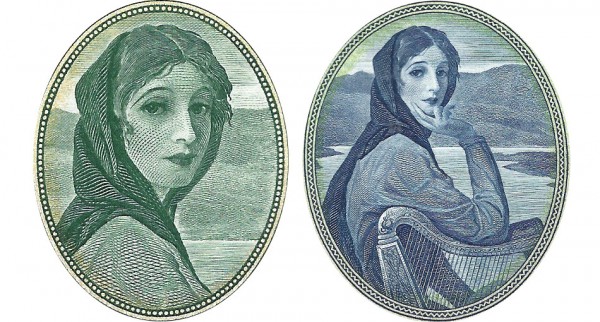 The back of the Lady Lavery banknotes feature designs that at first glance may appear identical, but are not. Centered in an ornamental design is a so-called River Mask, which can be found on the façade of the Dublin Custom House. The masks represent various rivers in Ireland, and were designed by the sculptor Edward Smythe. Initially the notes were printed by the London firm of Waterlow & Sons; later they were printed by Thomas De La Rue.

Initially, the notes circulated alongside so-called consolidated banknotes, which were issued by commercial banks throughout Ireland under the auspices of the Currency Commission. These consolidated banknotes (also called Ploughman Notes) were withdrawn from circulation starting in 1953, when the Lady Lavery Banknotes became the only circulating banknotes in Ireland.

Individual banks were allowed to issue currency (of a standardized design), a practice that had been common in Irish banking for hundreds of years. Even today certain banks in Northern Ireland and Scotland (both part of the United Kingdom) issue their own notes with unique designs, which circulate freely along with Bank of England issues.

While the most notable differences between the issues often derive from the change of signatures (as well as minor details in the text), certain notes printed during World War II are particularly interesting, as they were overprinted by a single letter within a circle. These are known as Emergency Tracer Overprint Codes, or War Codes. The exact purpose of these codes is unknown. Some sources say the codes were meant to facilitate the quick withdrawal of notes in case of a German invasion, while others say that they were merely meant to help track the notes from the time of their printing in England until delivery in Ireland.

Even though the basic design of the Lady Lavery notes remained unchanged for almost fifty years, there is a lot of variety to collect. First, there is the daunting task of collecting all of the dates. Such a collection would be out of reach for most collectors due to the cost and time involved, and because some reported dates have not been found yet. A more attainable collection would consist of all twelve types printed of the various denominations, which differ in signatures, text, and the presence or absence of War Codes. Such a collection would likely provide a lifetime of collecting enjoyment.

A set of one of each of the seven denominations is relatively easy to complete, although it does not come cheap. In Uncirculated condition, the 10 shilling note—which was not printed after 1968, when it was withdrawn and replaced by a 50 pence coin—and 1 pound note are easily found.

The 5, 10, and 20 pound notes are more difficult to locate, but can be found with some patience, although gem Uncirculated notes are much in demand in today’s market. The 50 and 100 pound notes are the most difficult, thanks to their relatively high face-value and much smaller print runs compared with the lower denominations. Most specialists consider the 50 pound note the most difficult to find in high grade and prices reflect this. Most notes that come to the market today are from the last few dates in the 1970s, some of which were no doubt saved as mementos when the Series B banknotes were introduced. Earlier dates can go up exponentially in value depending on scarcity. They remain much in demand, especially in the higher grades. 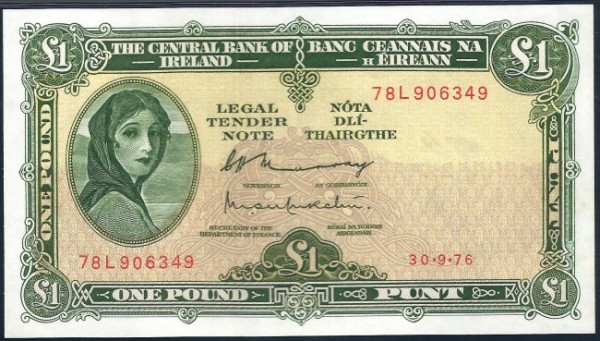 Last date of the £1 denomination. A Gem Uncirculated note such as this one is an affordable way to get started with a Lady Lavery banknote collection.

One reason why the higher denominations are so difficult to find in true Uncirculated condition is their size: the 10 pound note is 108 by 191 millimeters (approximately 4.25”x 7.5”), while the 20, 50, and 100 Pound notes are 114 by 203 millimeters (approximately 4.5”x 8”). When the public got a new higher denomination note from the bank or in circulation, often the first thing they did was fold the note in half or in thirds, making it easier to carry around. While this may have been convenient at the time, it has limited the quantity of truly Uncirculated notes now available to collectors.