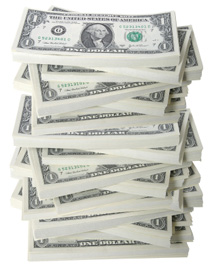 Two days ago, I addressed the membership of an area Rotary club.  Although I entertained the attendees with a good deal of numismatic trivia involving Michigan and the Lansing area, the main part of my presentation was on the subject of whether the US dollar would collapse.

You can review my April 5 column at Numismater.com titled “Will The Dollar Collapse?” to get the sense of my speech.

Unlike many previous columns that I have written here and elsewhere and in interviews and speeches I have given, in this speech I did not once mention the concept of the US government’s actions to suppress gold and silver prices.  Instead I quoted from the recent surveys issued by The Conference Board and Business Roundtable, the Consumer Price Index from the US Bureau of Labor Statistics, and from a recent interview given by Bill Simon, the CEO of Wal-Mart.

In a nutshell, I told the audience that the US government, through its programs of inflating the US money supply (disguised by calling them “quantitative easing”) is deliberately destroying the value of the US dollar.  Then I cited these sources of information to document my point and to show that the general public is starting to realize that this is happening (and will get worse in the future).

The audience consisted of mostly business and professional people.  At the end of my speech, several people asked questions that indicated to me that they understood the message and found my ideas plausible and possibly accurate.

This one sample is not sufficient to extrapolate a trend.  However, I would not be at all surprised if there is a significant trend developing.  Once the mainstream media begins reporting from established mainstream surveys or from major business leaders that consumer prices are heading for major increases in the near future, the public starts to pay attention.  They may not make the connection that higher consumer prices are one of the effects of the government’s inflation of the money supply, but it doesn’t matter.  As people realize and accept the notion that consumer prices are rising noticeably, they take action.

As we saw in the late 1970s, part of the general public’s reaction to anticipated price increases is to make consumer purchases earlier and in larger quantities.  Another trend is a huge increase in the number of people that purchase physical gold and silver as a hedge against rising consumer prices.

There is not a groundswell of mainstream media reports informing the public about the horrible state of the federal government’s finances, but more news is coming out everyday.  On January 26, 2011, the Congressional Budget Office (CBO) issued a report that Social Security will pay out $45 billion more in benefits in 2011 than it will collect in payroll taxes.  Further, the CBO stated that the deficits are now permanent and that the Social Security trust funds built up over the past 76 years would be completely exhausted about 2037.  The CBO had previously estimated that permanent deficits would not begin until 2016.

The 2011 deficit figure, by the way, did not factor in the additional decline of $85 billion in tax collections from the temporary reduction (from 6.2% to 4.2% of gross income) in Social Security taxes withheld this year.  If that were added to the deficit (which was not included because Congress had promised to transfer the $85 billion from general tax collections), the 2011 deficit would be $130 billion.

The general public probably did not pay much attention to this news report when it came out in January.  But you can be sure that the public will be paying a lot more attention to this figure in the future as Congress continues to struggle with funding current federal government operations.

Thus far, demand to own physical gold and silver has come from sophisticated investors or from other people who have taken the time to research information from precious metals experts and coin dealers.  As the mainstream media continues to expand its coverage of rising consumer prices, demand will also come from people who are not as sophisticated or have not taken the time to do thoughtful due diligence.

As a result, I expect that demand for physical gold and silver will change in the coming months.  I look for the number of buyers to increase along with total demand.  In the process, I expect this to push up precious metals prices even faster than we have seen in the past decade.