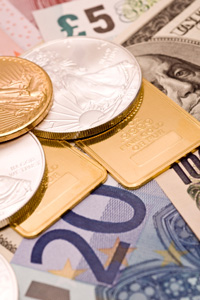 Usually it is not possible to write about a future event in the past tense.  Unfortunately, the result of the upcoming April 15 Group of 20 Finance Ministers and Central Bank Governors meeting held in Washington, DC was a failure.

Last November, the G-20 meeting held in South Korea sought to reach an agreement to try to prevent a worldwide currency devaluation war.  At the time, several nations whose currencies had been appreciating against a falling US dollar were starting to take steps to counter the shift.  That meeting failed as the US plan to supposedly solve the problem was rejected by China and Germany.  The solution proposed by China and other nations was blocked by the US.  The outcome of the November 2010 meeting was an agreement to meet in early 2011 to try to reach an agreement on this problem.

At the conclusion of that meeting, US President Obama congratulated the attendees for what they had accomplished!?

In February, the next G-20 meeting was held in Paris.  Ahead of this meeting, London’s Financial Times published a column titled “Another harmless G20 meeting.”  The article pointed out that there was still a stalemate where China, Germany, and France were united in opposition to the US plan and the US would not accept any alternate solution.  The Times column stated, “there is little prospect of coordinated management of either global capital flows or of exchange rates.”  The report also noted that the biggest source of discord in the G20 was between nations that were running government surpluses and deficits.

The result of the February meeting was inconsequential—an agreement to work on developing a list of indicators that could be used to measure global economic imbalances.

For the upcoming April 15 meeting, a source close to the French delegation stated in advance, “We are going to agree on the guidelines which will allow us to use these indicators.  On the basis of this methodology we will examine, in a second phase, the cause of the global imbalances.”

The guidelines that were adopted at the April 15 meeting were to measure imbalances on a country-by-country basis using statistical data with a fudge factor for economic theory.  In advance of the meeting there was a report that countries and zones which were at the heart of the global imbalances would be identified, but that did not happen.  The failure to identify these nations and zones precluded a plan to increase surveillance on them.

The April 15 meeting did succeed in reaching an agreement to seek an agreement at the November 2011 on an action plan to “rebalance the world economy to achieve balanced and sustainable growth.”  I could probably also write a news report today on the failure of that future meeting, but there are just too many looming financial calamities between now and then to anticipate all the details.

The bedrock problem underlying the inability of the G-20 nations to find a way to avert expansion of global currency wars is that no national paper money is backed by a fixed unit of value such as ounces of gold or silver.  All of the member governments are so used to reckless spending that, in my judgment, the necessary political steps to try to rectify the problems with the falling values of national currencies will never be taken.

The bottom line of the failure of the upcoming April 15 G-20 meeting is that there is an even increased risk that the US dollar will continue to decline in value, that a number of other nations will respond by trying to reduce the values of their currencies, and that gold and silver prices are bound to rise.  There is a point to my writing this news report in advance of the occurrence of the event.  That is that you don’t need to wait for the April 15 G-20 meeting to come to pass to acquire physical precious metals to protect your own wealth.