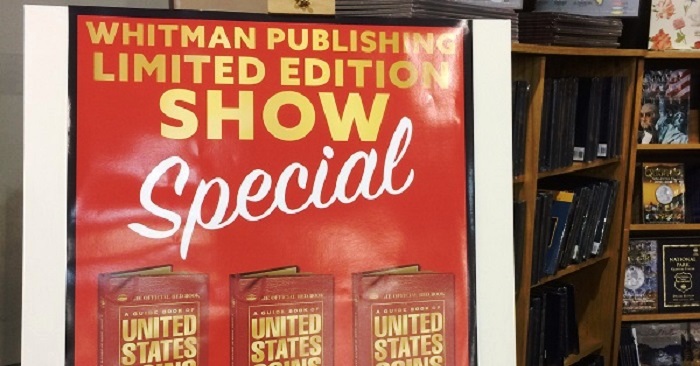 In and Around the Bourse and the City of Philadelphia

Thursday morning’s business meetings started early with authors, book dealers, and other publishers. I had an insightful conversation with officers of Tokyo’s Taisei Coins Corporation, a longtime partner with Whitman Publishing. In the 1970s legendary coin dealer Masamichi Oka, a brilliant marketer known as the “R.S. Yeoman” of Japan, collaborated with Yeoman and with Kenneth Bressett on projects including Japanese-language editions of the Catalog of Modern World Coins. In the 1980s he continued this collaboration with Arthur Friedberg, who took over the Catalog’s editorial work after Yeoman. This effort was revisited in 2010 by Mr. Friedberg working with Mr. Oka’s son, Masahiro Oka, on a Japanese version of the book’s 14th edition. Taisei Coins, now in its 50th year of business, is the largest coin dealer in Japan, and runs the official auction of the Tokyo International Coin Convention, the biggest Japanese show. The market for world coins and other collectibles in Asia is quite active. 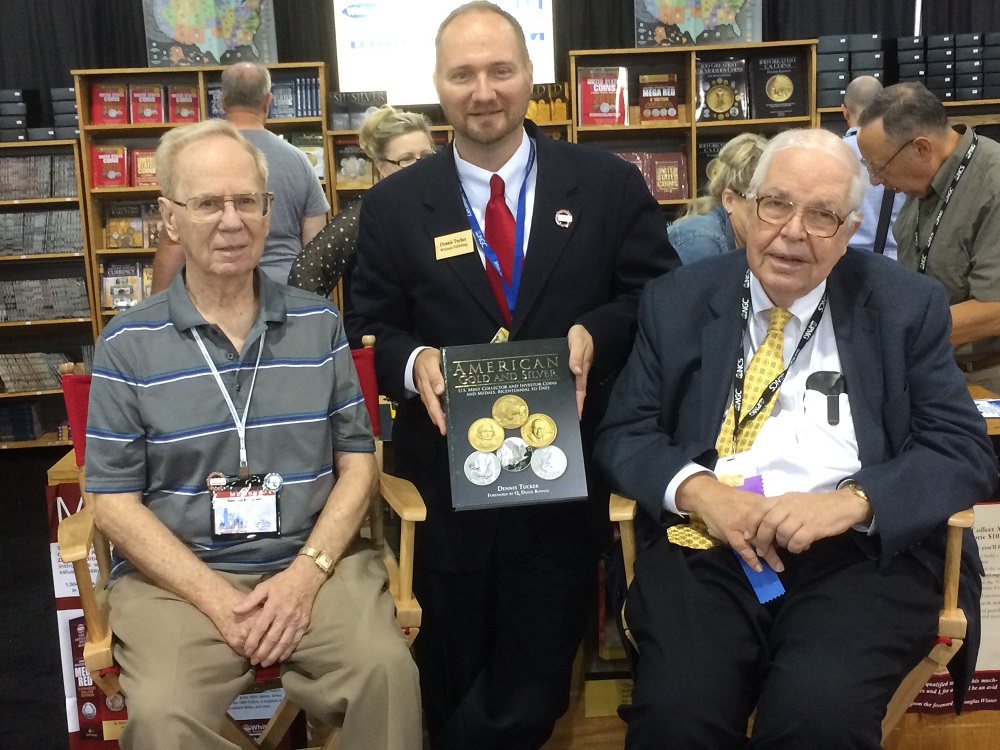 My meetings ran long and I wasn’t able to catch Robert Fritsch’s 9:00 a.m. presentation on “The Lure and Lore of Collecting Medals.” Bob is well known for giving entertaining and informative talks, so I was disappointed to miss this one. He’s one of those hobbyists who’s always serving on boards and in other leadership positions, to the great benefit of the hobby. He was the president of the Token and Medal Society when I served on its board of governors. We did have some time to catch up the evening before when we dined together at the TAMS banquet.

I was free by 10:15 and went (late) to the symposium of the Numismatic Literary Guild, a presentation by Scott Travers, Joshua McMorrow-Hernandez, and Charles Morgan on “Cultivating New Collectors With Online Blogs and Publicity.” They shared their personal experiences and offered advice and guidance on using new media to capture the interest of today’s collectors. Travers gave examples of how short articles published online and in print can drive traffic to a coin dealer’s shop or website. Morgan cautioned that quality must prevail—that 600-word essays that have no real meat on the bone won’t turn newcomers into long-term collectors.

McMorrow-Hernandez summed up the talk: “Big picture, we told the audience that an online presence is necessary for coin dealers, coin clubs, and others in the hobby who wish to reach the online crowds and especially those who wish to engage younger people in the hobby—who are spending unprecedented amounts of time online and using mobile devices. Scott and I suggested that short-form content is great for attracting individuals whose attention spans may be shorter, but Charles made the case that long-form content is just as important in catering to those who want rich educational and informational content that is otherwise hard to find in print.” They discussed search-engine optimization and using blogs to build personal “brands.”

I later followed up with McMorrow-Hernandez and he told me, “Ultimately, the message is that blogging is a great tool for recruiting new collectors and mobilizing hobbyists to become more active in the hobby, and that creative blogs with well-written content and a unique voice are most successful.”

A portion of the Whitman Publishing display: books, folders, albums, and other hobby supplies for sale.

Back at the Whitman Publishing booth, authors including Frank J. Colletti and many others congregated to talk shop and visit with collectors. I can’t emphasize this enough: If you go to an ANA show, you need to hang out at the Whitman booth for a while. Your chance of meeting some of your favorite numismatic writers is close to 100 percent. Dave Bowers, Ken Bressett, and I autographed copies of our books Thursday morning. Later in the afternoon, Bob Leonard, Roger Burdette, Harlan Berk, Edmund Moy, and other Whitman authors talked with hobbyists, posed for photos, and signed books and other souvenirs.

Coin World editor-at-large Steve Roach walked to Panera Bread with me to grab a chocolate cookie and orange juice (the breakfast of champions?) before I headed to my 1:00 presentation with the Citizens Coinage Advisory Committee. I’ll write about that panel discussion (“‘Why Did They Do That?’—An In-Depth Discussion of the Interaction Between the CCAC, Congress, and the United States Mint”) in another article.

After the two-hour presentation, I met up with Mitch Sanders, a past chairman of the CCAC, who writes a column for beginning collectors in The Numismatist called “Getting Started.” We took a break from the show to stroll over to Reading Terminal Market, Philadelphia’s famous bustling indoor public market and food emporium adjacent to the Convention Center. 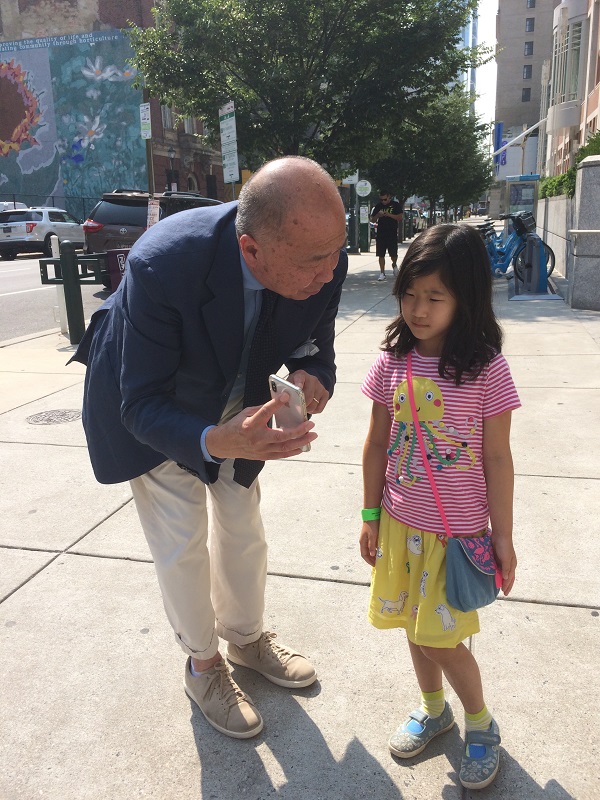 That’s part of the fun of going to coin shows: the opportunity to sit down and break bread with old friends and talk about the hobby. The Internet can come close to that experience with blogs and discussion boards. . . . close, but never quite the same!

As tempting as it was to go hog-wild at the Market, I limited myself to a strawberry smoothie, knowing that I had two—yes, two—dinners scheduled for that evening. 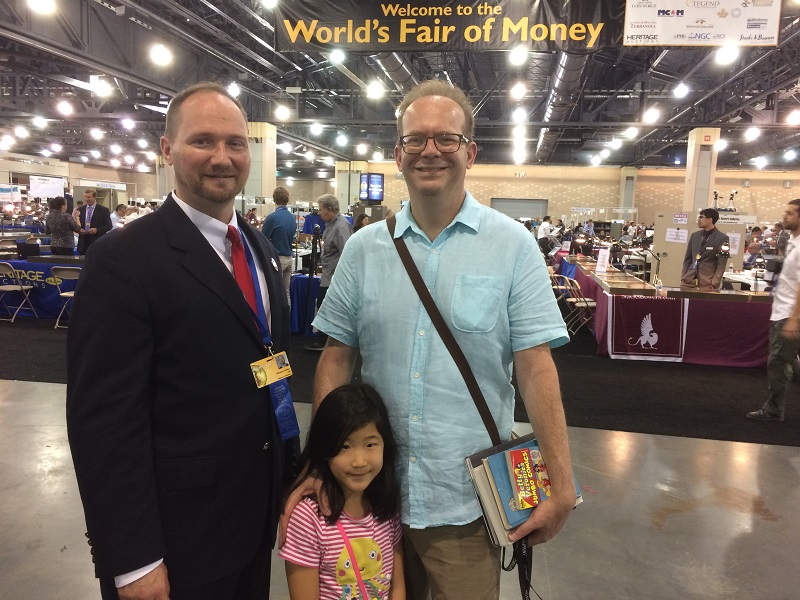 Dennis Tucker and Mitch Sanders and his daughter outside the bourse.

I wasn’t able to attend the 3:00 “Meet the Experts” symposium on the why, what, and how to collect tokens and medals, but I emailed a few questions for the Q&A to moderator Susan Trask, president of the Civil War Token Society. They were:

The experts in the “Meet the Experts” panel were Q. David Bowers, Steve Hayden, Fred Holabird, Neil Musante, and Susan Trask. They drew an audience of more than 60 people. 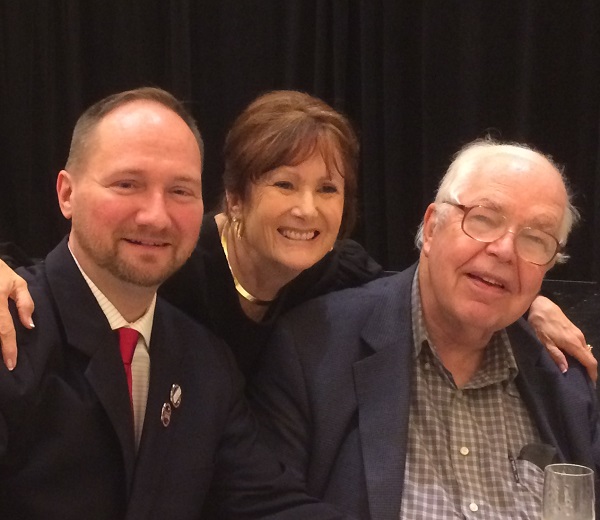 An hour or so of sidebar conversation with the above-mentioned Art Friedberg, president of the Coin and Currency Institute and co-author of the Guide Book of United States Paper Money (among other books), was another welcome and productive interlude. Yet another advantage of physically attending coin shows, for me, at least—they’re a venue to brainstorm ideas in real time, share information, learn from experts, and see where the numismatic conversations take you.


My first dinner of the evening was hosted by the Austrian Mint (Münze Österreich) at the historic Morris House Hotel on 8th Street. This is a beautiful venue with courtyard gardens and Federal period woodwork and decorations. Dignitaries and managers from many world mints, publishing firms, writers, and researchers were in attendance. Our hosts were Gerhard Starsich, director general and chairman of the executive board of the Austrian Mint, roughly the equivalent of the director of the United States Mint, and Dr. Manfred Matzinger-Leopold, a board director with an engineering background, in charge of much of the Mint’s research and development, technical management, and laboratories. Starsich has a long career in finance and accounting at the national and international levels, and Matzinger-Leopold’s background is in metallurgy and project-management in high tech and healthcare. They both are genial hosts.

Dinner with the Austrian Mint is an international affair.

I enjoyed chatting with Dr. Prabir De, an international economist who works on the Australian equivalent of the Citizens Coinage Advisory Committee, and international auctioneer Celestino Lamas of Lamas Bolaño. I also learned a lot talking with Ron Harrigal, quality manager for the United States Mint.

I left the Austrian Mint banquet around 8 o’clock with Numismatist managing editor Caleb Noel and Coin World editor-at-large Steve Roach. We returned to the Downtown Marriott for the annual “bash” of the Numismatic Literary Guild, which is celebrating its 50th year. Congratulations to everyone who won awards in the Guild’s Writers Competition, especially these Whitman authors: 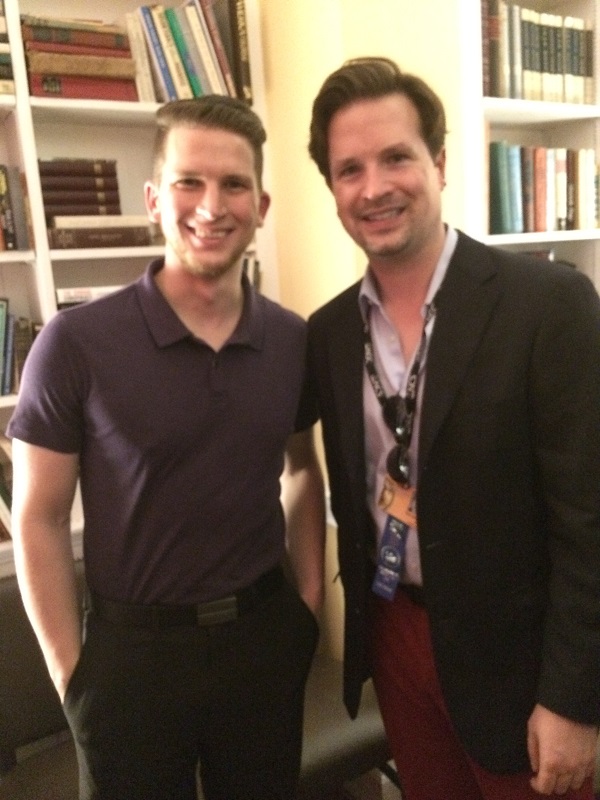 Membership in the Numismatic Literary Guild is open to everyone who writes, publishes, or edits in the numismatic field, plus researchers, catalogers, museum curators, and others accepted by its membership committee. I strongly recommend you join if you fit any of these categories. A membership application is online.

The NLG Bash ran until 10 o’clock and then I caught up with Numismatist editor Barbara Gregory and other writers and editors in the hotel restaurant. Before too long we bade our farewells—another jam-packed numismatic day awaited us all in the morning.