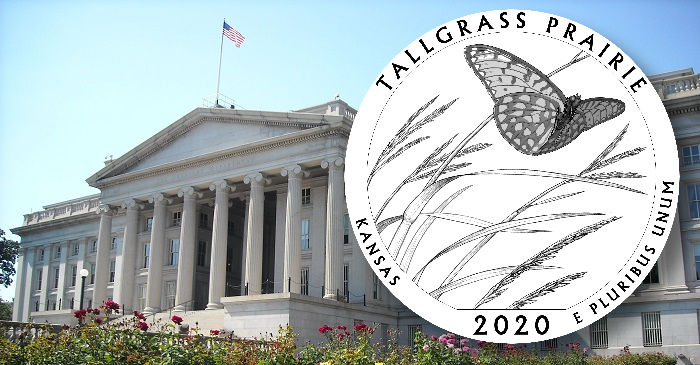 We knew the challenges for this coin going in, and I think the Mint’s artists did a very good job with such a difficult subject. The National Park Service calls Tallgrass Prairie National Preserve in Kansas “the last stand of the tallgrass prairie” that once covered 170 million acres of North America. “Within a generation, the vast majority was developed and plowed under. Today less than 4% remains, mostly here in the Kansas Flint Hills. The preserve protects a nationally significant remnant of the once vast tallgrass prairie and its cultural resources.”

How do you portray the vastness of such a space, on a one-inch coin? 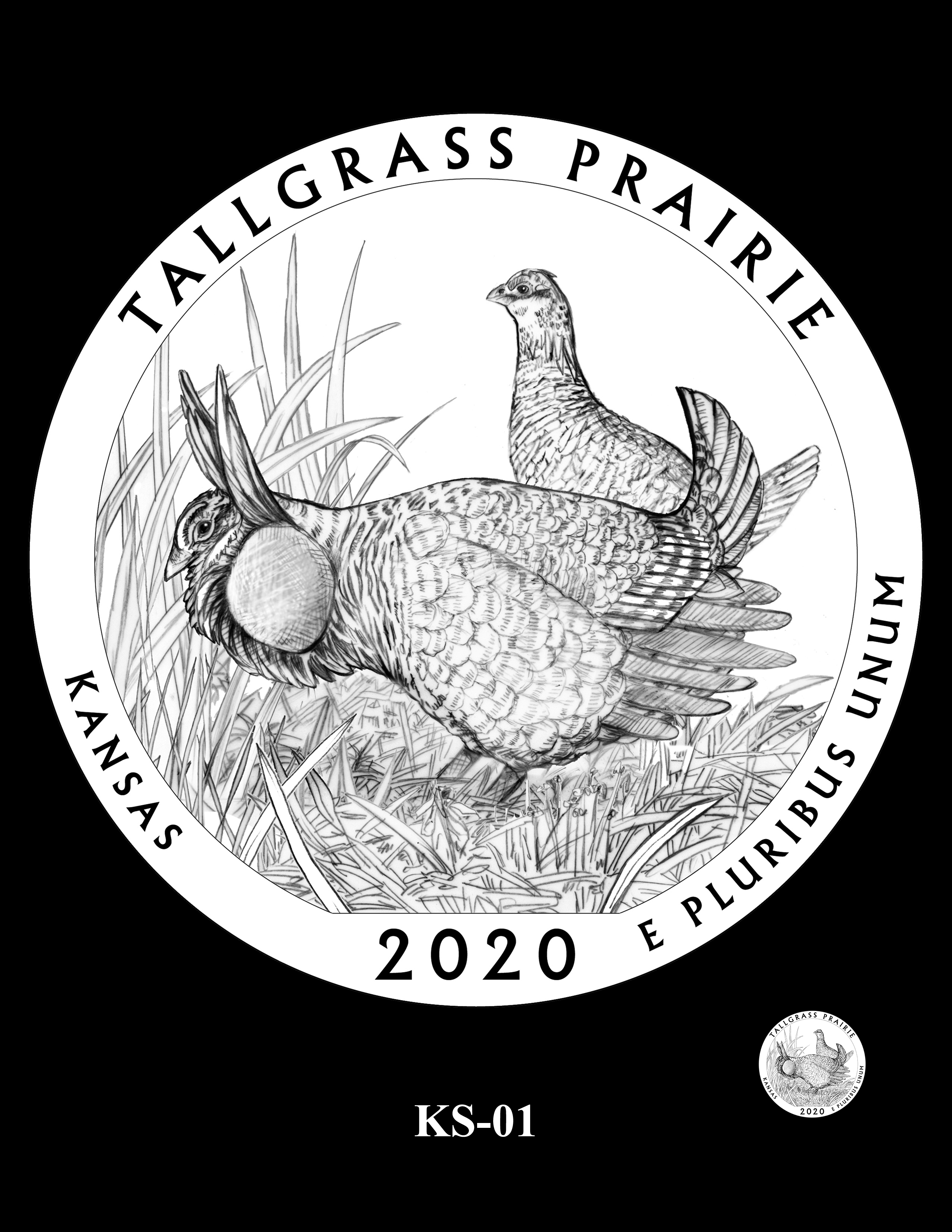 Our National Park Service liaisons identified the greater prairie chicken as an animal of particular interest to the preserve. I like the designs that prominently feature this bird—KS-01, 02, 03, 04, and 05. 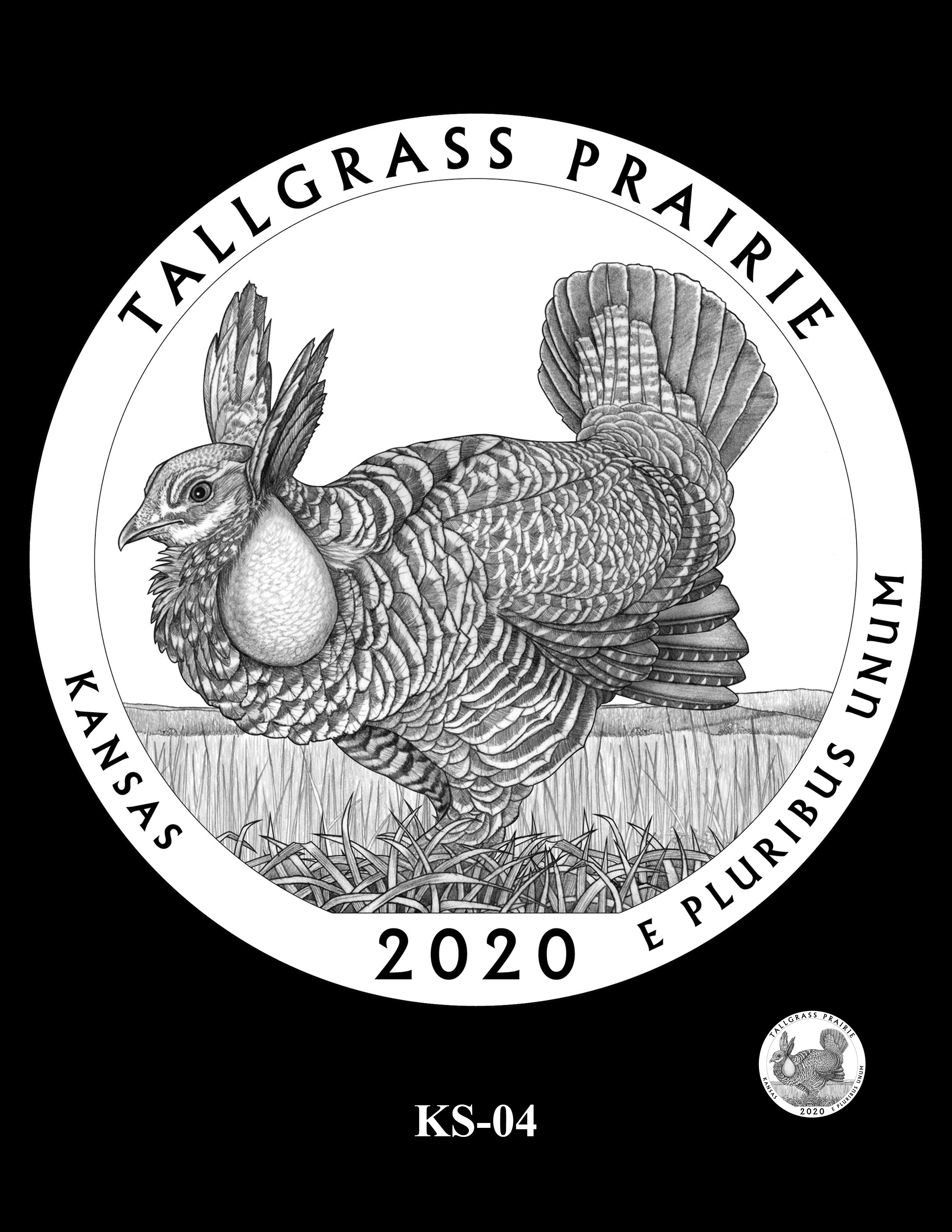 All of them, except for 04, were ranked as preferences by the preserve’s liaisons. This was odd because 04 was actually the one that gained the most positive attention from the CCAC. To my eye, and many of my colleagues agreed, this was the boldest of the prairie-chicken designs. It would finally give us a quarter with a single emphasized animal, instead of one accompanied by other animals or surrounded by busy background details.


In our October 2017 phone conference, where the CCAC discussed themes and potential design elements for this coin and others, I said:

Another element that was mentioned by our liaisons is the greater prairie chicken. If you’re not familiar with this bird, it’s really quite remarkable. The female is plain, like a lot of female birds are. She’s brown and black and white striped, so it’s easy for her to hide in the grass. But then when you get to the male when he’s presenting, he has these outrageous plumes and spiking crests and these colorful bulging orange sacs on the side of his head. And the males strut around. They make moaning noises. It’s a very interesting display. If we could incorporate this bird into a design that also features the prairie grass, I think we would have something that people could look at and say, ‘That’s the Tallgrass Prairie Natural Preserve.’

Design KS-04 performed well in our voting tally, earning 12 of a potential 24 points. 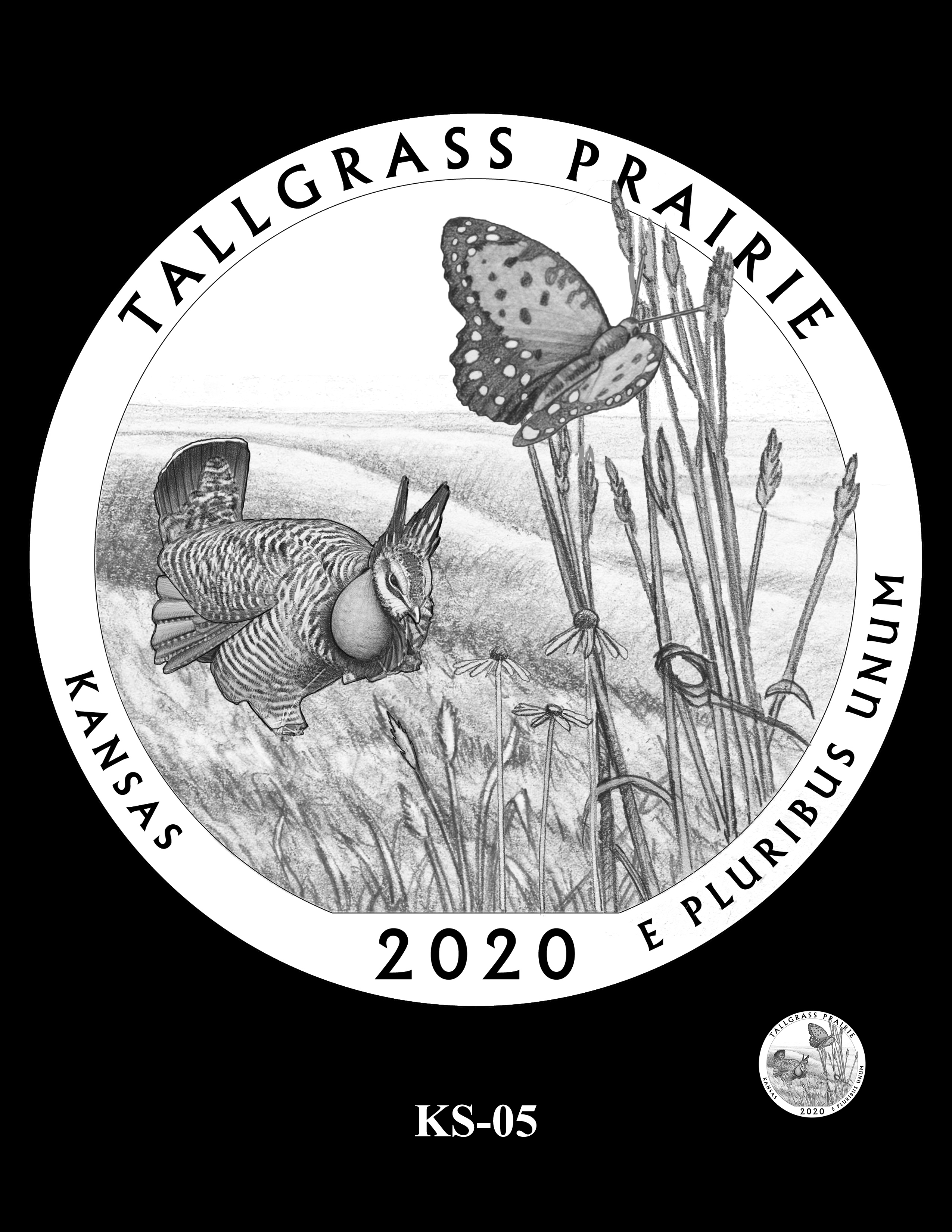 KS-05 we generally found to be too busy, and there were others that portrayed the bird and butterfly more effectively. 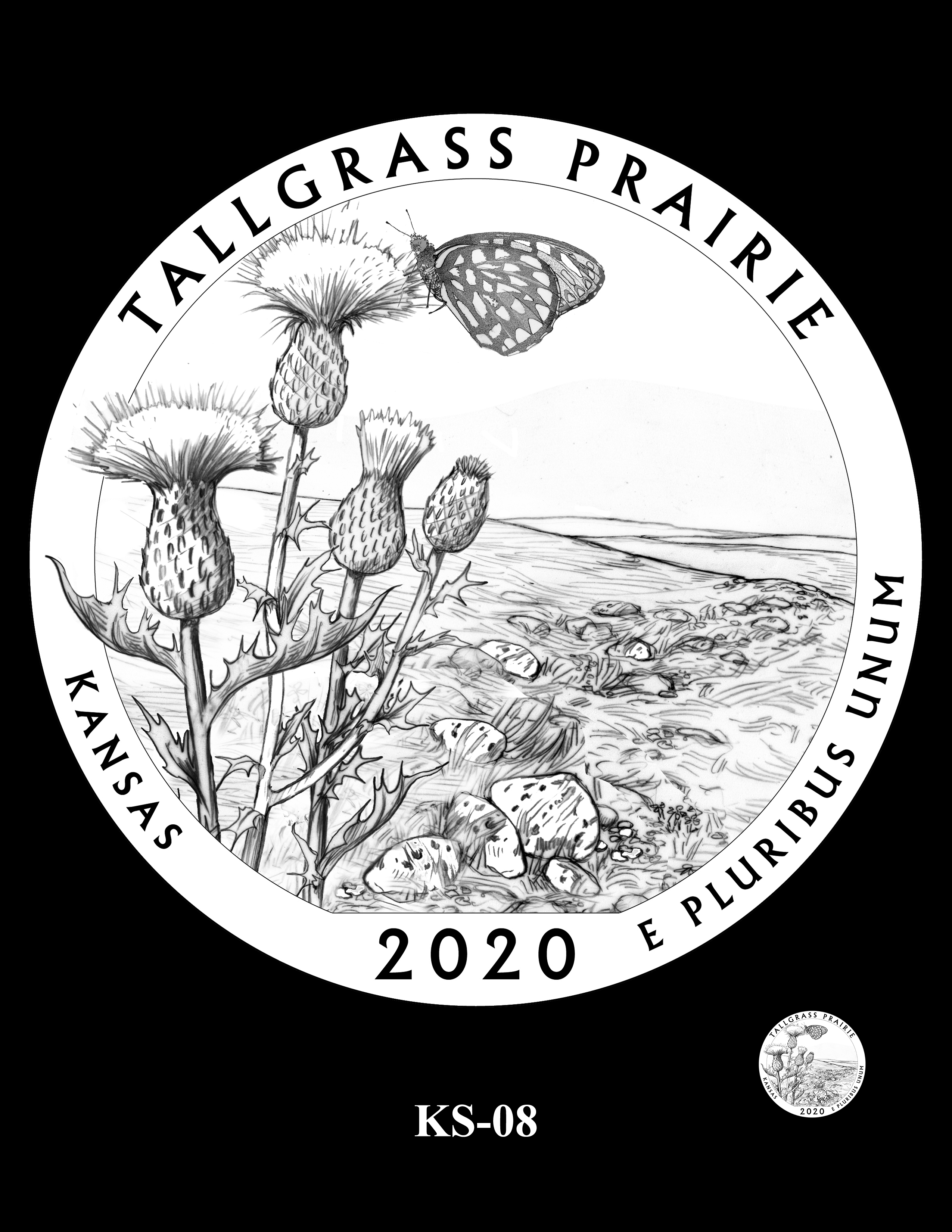 I liked the designs with butterflies in the grass. KS-08 gives some height to the plant life of the prairie, with white space that serves to accentuate the figure of the regal fritillary butterfly perched on a thistle. 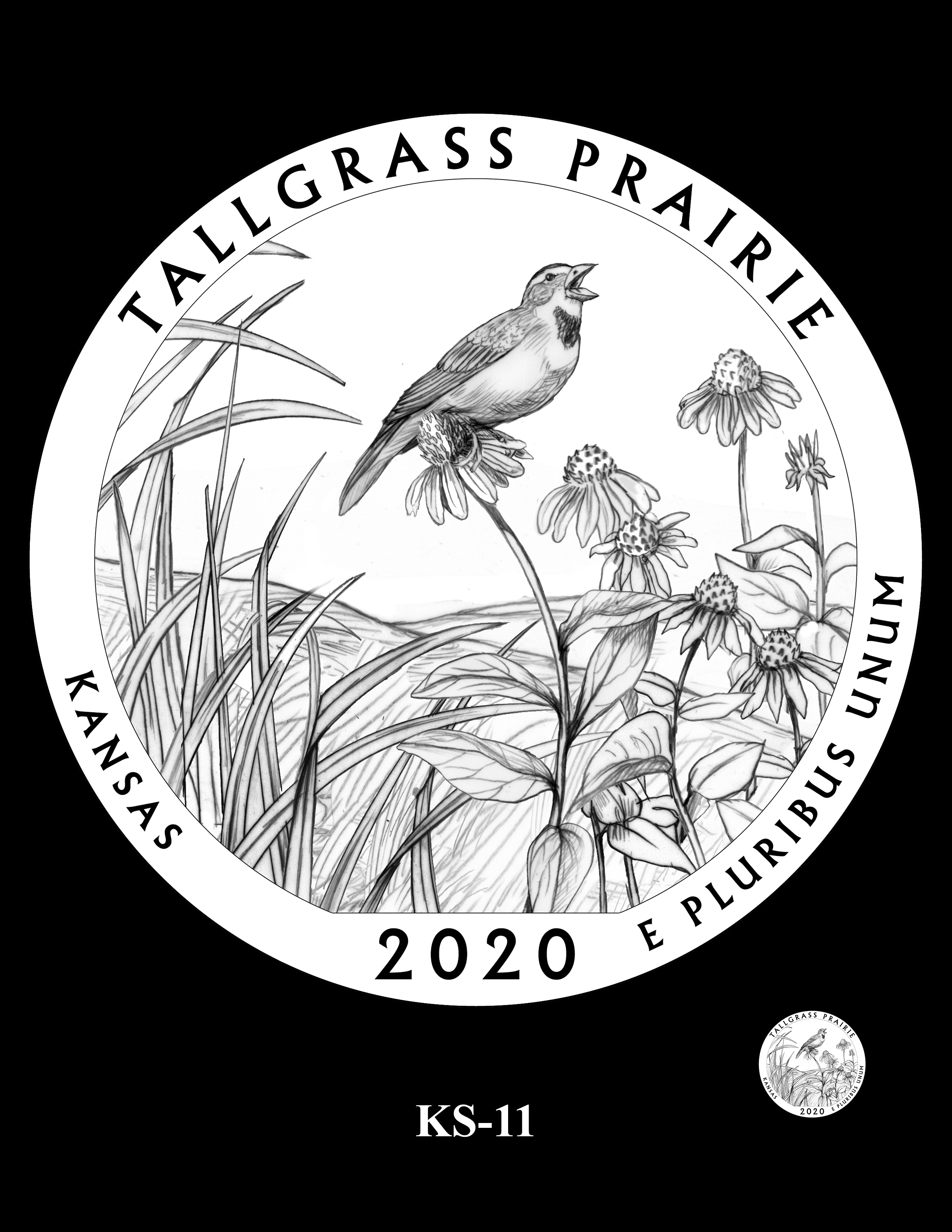 KS-11 I didn’t like at first, because I thought there’s no way a purple coneflower could support the resting weight of a songbird. But a bit of research brought me photographs that show this is true to life. The picture is charming. I considered KS-11 to be another strong contender, and my colleagues agreed; it earned 11 points in our voting. 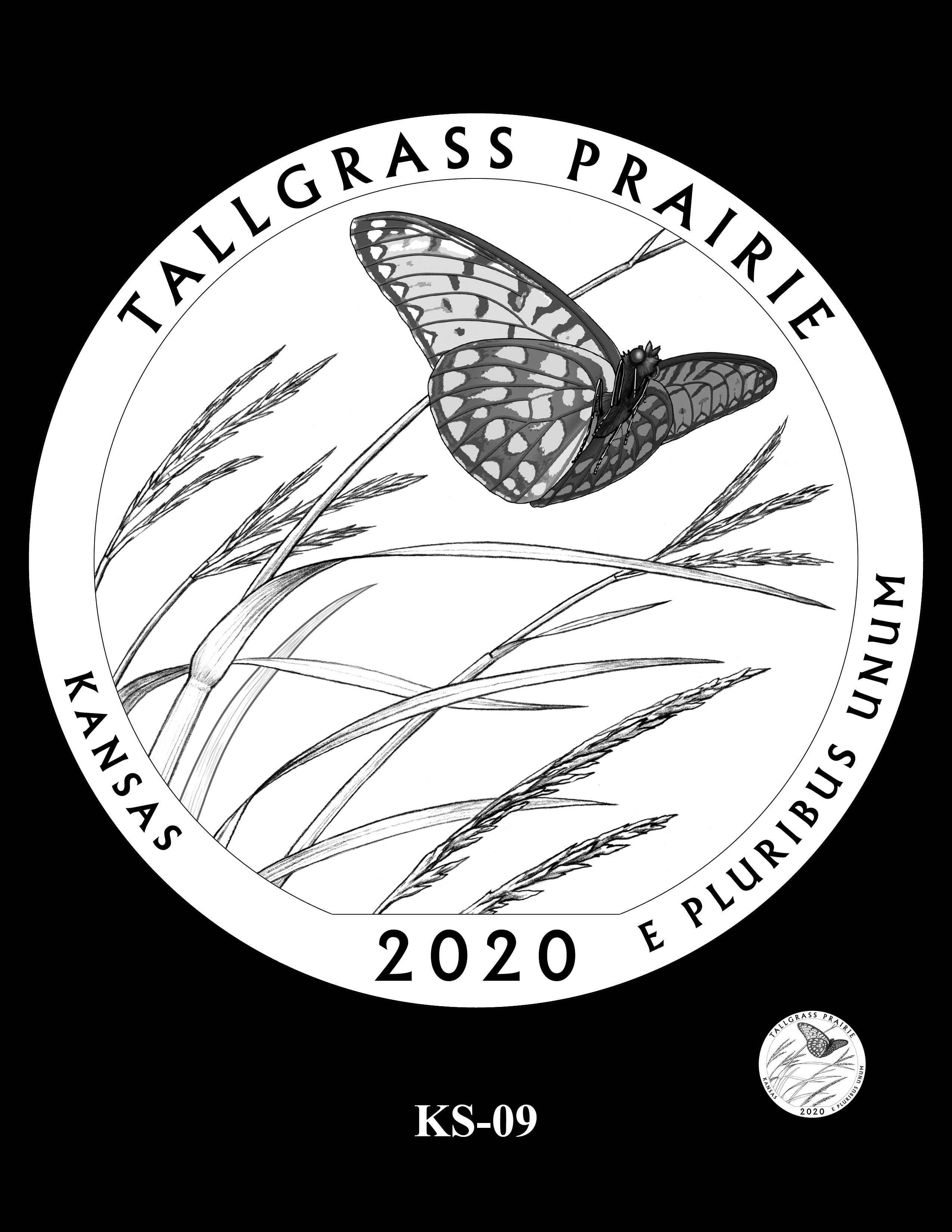 In the end, it was design KS-09 that won our official recommendation, and strongly so, earning 23 out of a possible 24 points. This motif elegantly portrays motion along with the grass, and picturing the butterfly from below accentuates the height of the Big Bluestem and Indian grasses—the “tall grass” of Tallgrass Prairie. As we’ve noted before, movement is a dimension that many coinage designs don’t show, instead being static dioramas or scenic landscapes. The grass here is not standing upright but sways gently in the wind, an illusion that’s carried forward by the flight path of the butterfly—a simple but strong design, with good use of the canvas.