On August 6, 1973, the US prime interest rate increased to 9%, the highest level since at least 1947. I was working two jobs before my senior year in college. At the time, in my relatively inexperienced naiveté, I thought that the world economy would collapse.

It did, but it didn’t. The Dow Jones Industrial Average had climbed from a low of 631 earlier that decade to a high of 1051 in 1973. It then fell all the way down to 577. The Dow Jones Industrial Average did not surpass its 1973 peak for a full ten years. In the decades since, the world economy has grown to levels I did not anticipate back in 1973.

My hometown did not have a coin and bullion dealership. I had to wait until I returned to college in late August 1973 to find a coin shop where I made my first purchases of physical gold and silver. My resources were limited, as I was paying all of my college costs at the time out of my summertime earnings. But I still had the judgment and foresight to use some of the funds to buy precious metals. 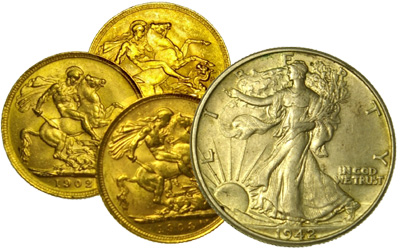 These coins, which were British Sovereigns and US 90% Silver Coins, were sold in early 1980 for a huge profit. When sold, they enabled me to purchase other assets which outperformed precious metals over the next several years. My successful trading of gold and silver on a personal basis also contributed to my becoming a coin dealer in 1981. This provided me enough experience to begin sharing my market observations with others starting in 1995.

Back in 1973, I didn’t know what the future held, but I was fearful of what I expected would soon happen to the world economy. What I didn’t understand at the time was that the people of the United States and other developed countries had acquired great reserves of wealth through, in part, stable currencies backed by gold.

That huge amount of reserve wealth supported the economy during rough times of the mid-1970s into the 1980s. There was enough “fat” in the economy that it was able to survive without a worldwide collapse.

In the decades since, missteps by governments have further consumed accumulated wealth. Politicians have paid for programs to buy votes by raising taxes, inflating the money supply, and incurring debts with theoretical promises to repay them “someday” in depreciated paper currencies.

Today, the reserves of accumulated wealth have largely been wiped out. Therefore, any new government mismanagement is coming back to haunt politicians sooner than in decades past. With the actions of the major world governments, central banks, and major banks in the past few weeks, I am once again fearful that the world is approaching the brink of collapse.

This time around, I am worried for more than myself. I have a spouse, children, and grandchildren who will have to live in the world economy that is coming. Once again, I anticipate severe economic calamities just around the corner.

And once again, I am taking steps to protect my family. I hope for the best, but want to be prepared for the worst. That way, I can better manage whatever comes to pass. I have stocked up on the necessities of life, including water filters and food. In addition, last week I added to my personal holdings of physical precious metals.

It is my hope that the citizens of the world will retain enough skills and talents to help the economy recover after destructive government programs collapse from the burdens that they impose on people. A sound financial basis such as gold and silver will help achieve prosperity once more.

Over two thousand years ago, a baby boy was born in Bethlehem. Three wise men came from the East, bearing gifts of gold (symbolizing virtue), frankincense (prayer), and myrrh (suffering). There is a story that the gold was used to pay the way for Joseph, Mary, and Jesus to escape to Egypt to avoid the murder of Bethlehem’s young children ordered by King Herod.

It is not an accident that gold presented a Christmas blessing to the world two thousand years ago and that precious metals remain a blessing today.