One of the most fascinating series in South-American numismatics, the 960 réis of Brazil, first minted in 1810, differs slightly from other “crown-sized” coins from the early 19th century.

Most date/mint-mark combinations can be found with relative ease, since many dates were produced in large quantities, but it is the source of the silver planchets used to strike the coins that makes the series so interesting. The Brazilian mints used any coin they could get their hands on, no matter what it was or where it came from. While most coins used were Spanish Colonial 8 reales (the most common trade coin in the world in the early 19th century) many other under-types are known, and no doubt more are waiting to be discovered. 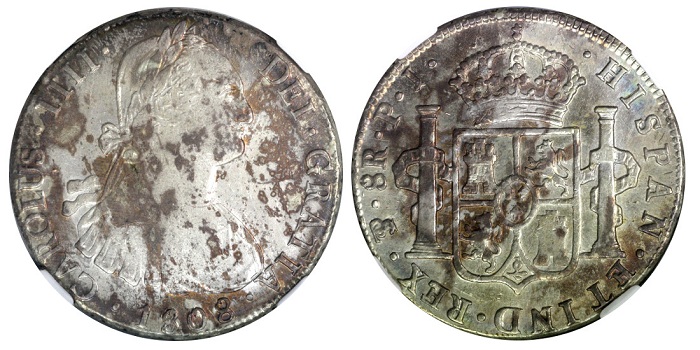 Prior to the Brazilian mints striking coins of the 960 réis denomination, 8 Reales were over-struck with a small (U.S. dime-sized) counterstamp, revaluing them for Brazilian trade. At the time Brazil was still a colony of Portugal, and in 1807 the Portuguese court, including the royal family, many noblemen, and high ranking officials (about 10,000 people), moved to Brazil following a blockade and invasion by France.

The Portuguese took this rather unusual step in order to stay loyal to the United Kingdom, whose trade was extremely important to the Portuguese colony. The royal family would stay in Portugal for 15 years, creating an interesting situation: the huge colonial empire of Portugal would be ruled not from the motherland, but from one of the colonies itself.

In 1815, the United Kingdom of Portugal, Brazil, and the Algarve was created, essentially putting Brazil at the same political level as Portugal. It is generally assumed that the counterstamps mentioned above were a temporary measure meant to facilitate the new expenses of hosting the royal family and their entourage in Brazil.

On November 20, 1809, a new coin was created that would continue to be produced until a few years after Brazil gained independence from Portugal in 1822. Most pieces were struck at the Bahia and Rio de Janeiro Mints (until 1826 and 1827, respectively, with some exceptions that we will get to later); a small number of pieces were also struck in Minas Gerais in 1810 and 1816. Three different designs were used: the initial colonial type has the Portuguese crown above the coat of arms, flanked by the date, denomination, and three small flowers. 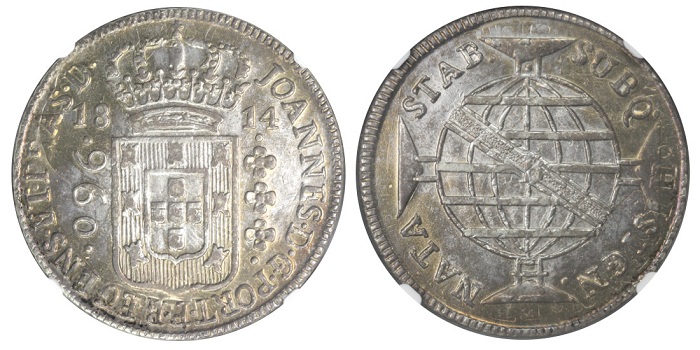 Around the crown is the motto JOANNES.D.G.PORT.P.REGENS.ET.BRAS.D, an abbreviation that stands for “John, by the Grace of God, Prince Regent of Portugal and Defender of Brazil.” The central reverse has a so-called armillary sphere placed over a large cross with a diagonal band, on which is placed the mint mark. Around the design is the motto SUBQ/SIGN/NATA/STAB, which literally translates to “You were born under this sign and will remain this way.” Numismatic researchers have yet to agree on an exact interpretation of this, and it remains open to discussion. 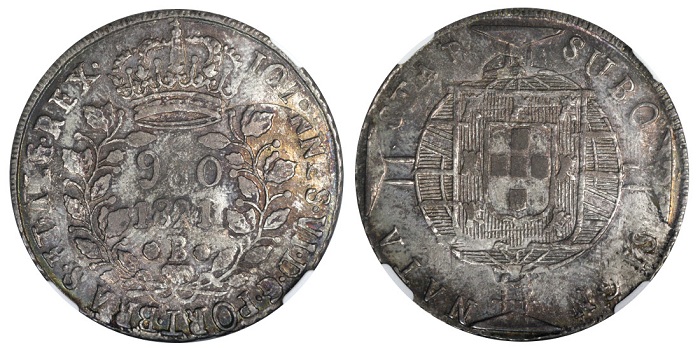 The second design of the 960 réis coinage is known as the United Kingdom type and no longer features the Portuguese coat of arms under the crown. Instead, it shows the denomination (as just 960), the date, and mint mark in a wreath consisting of leaves from a coffee tree. The legend also changed to JOANNES.VI.D.G.PORT.BRAS.ET.ALG.REX, which translates to “John VI, by the Grace of God, King of Portugal, Brazil, and Algarve.” The reverse still features the armillary sphere, but placed on it is the Portuguese coat of arms that was moved from the obverse. The legend around the sphere remained the same. This type was struck from 1818 to 1822 at both the Bahia (starting in 1819) and Rio de Janeiro Mints.

The final design of the denomination was struck from 1823 to 1826, after Brazil gained Independence. It features a large “960” central on the obverse, flanked by crosses and flowers. The date and mint mark is below a wreath of tulips, and around it is the motto PETRUS.I.D.G.CONST.IMP.PERP.BRAS.DEF, which translates to “Peter I, by the Grace of God, Constitutional Emperor and Perpetual Defender of Brazil.” The reverse features the new Brazilian Coat of Arms and the motto IN HOC SIGNO VINCES, which translates to “Under this sign you will win.”

It must be noted that initially the creation of this issue was very profitable for the Portuguese. An 8-reales coin was valued at approximately 750 réis in Brazil; when higher-valued 960-réis issues were struck on the 8-reales pieces, the government gained an instant profit of about 20%.

This helped to guarantee that the Brazilian coins were not exported on a large scale, but circulated solely within the Brazil. The coins were purchased from a number of sources, including visitors to the country, which is the reason so many different undertypes are known and why some undertypes are extremely rare to unique. The mints just used whatever showed up at their doorstep. 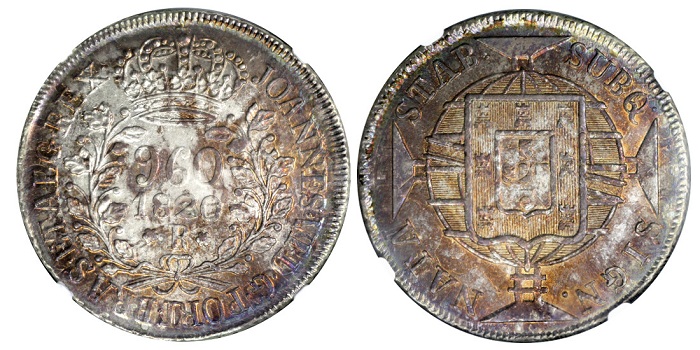 When the coins were struck at the Brazilian mints, the old coins were made hot enough to strike them again, but they were not completely melted, ensuring that on most coins certain details of the original coins remained visible. On some the date, mint mark, and more is visible, while on others only portions can be seen — sometimes enough to identify the major type if nothing else. Those with a visible date/mint mark on the undertype are worth more, although for rare undertypes this is not necessary for the coin to be valuable.

As mentioned before, most coins of this type were struck on Colonial Spanish 8 reales of the Portrait type, minted throughout Central and South-America. Most coins are from the later 1810s and 1820s, but earlier dates (including Pillar 8 reales) are also known, albeit in much lower numbers, as these had not been minted for several decades. About 22.5 million 960 réis were overstruck from 1810 to 1827. While exact numbers are unknown, it is probable that approximately 80-90% of these consisted of the Spanish Colonial 8 reales of the Portrait type. 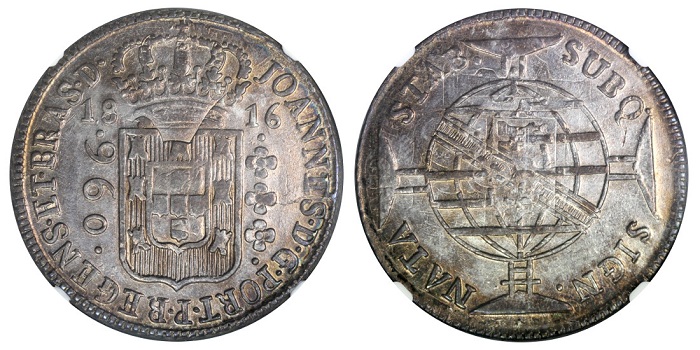 In addition to these 8 reales issues, other types turned up at the Brazilian Mints and were made into 960 réis pieces. Other Spanish coins are also relatively common, as are pieces from neighboring South American nations like Argentina and Peru.

The rarest undertypes were struck on various coins from around the world, some of which yielded only a single known piece, while others have only a few confirmed examples. These likely came about after a few coins in the pocket of a sailor or visitor ended up at one of the Brazilian Mints, and they are prized by specialists for their rarity. Examples of such rarities include:

The coins struck on Bust dollars of the United States are not the rarest of the undertypes, but they are certainly among the most prized by collectors. Several examples have sold in recent years, including an 1823-R overstruck on a 1798 Bust dollar graded MS-62 by NGC, which realized $23,500 in January of 2013. Other high prices have been noted, such as $37,375 for an 1810-M 960 réis with inverted reverse graded XF-45 by NGC, and a pattern strike of this issue dated 1809 and graded PF-62 by NGC, which sold for $30,550.

Not all examples of this historic coin are so rare and costly, however. For about $125-$150 a collector should be able to pick up a nicely circulated example, with several details of the host coin still visible. Prices go up from there, and coins showing the full date and/or mint mark and assayer of the undertype command higher prices. Coins on which the date of the undertype matches the date of the 960 réis also see increased demand.

Several dates are known to have been struck on so-called “virgin” planchets, which are clean, new planchets from the Brazilian mints. These are extremely rare and do not exist for all dates. If it appears that a coin does not have an undertype visible it is best to study it very closely, as usually a few small bits and pieces of the undertype can be found upon closer inspection.

One final note: a small number of pieces are known to have been struck at the Rio de Janeiro Mint in 1832, 1833, and 1834. The total mintage for all three dates combined was 3,193 coins, including just 154 coins of the 1834 date. These three coins are multi-thousand dollar rarities that appear on the market very infrequently. Although they use the design of the 960 réis coinage discussed in this article, they were struck on normal silver planchets, and should perhaps be considered a separate series. Their rarity, however, prevents many collectors from obtaining even a single example of these three dates.