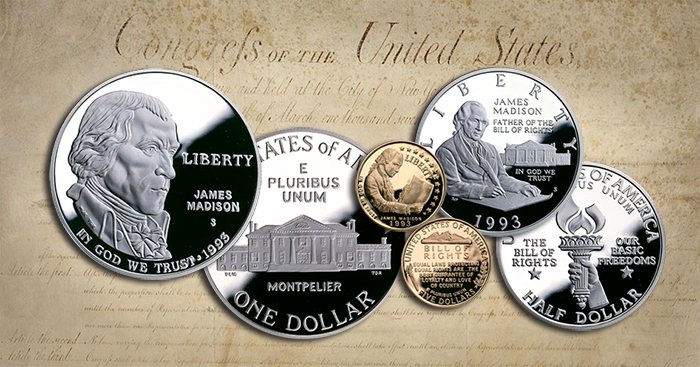 Note: This post was updated on Dec. 16 at 1:10 p.m. to correct the composition of the Bill of Rights half dollar, which was originally described as clad. (It’s silver.) Thank you to Steve G for the catch!

Today—December 15, 2016—is the 225th anniversary of the ratification of the Bill of Rights. “Bill of Rights Day” was first proclaimed by President Franklin D. Roosevelt in 1941 at the request of Congress, to honor the document’s 150th anniversary. Congress repeated its request in 1946, and President Harry Truman complied; he issued the declaration in 1947 as well. The practice was not repeated for many years, and it was not until 1962 that it became an annual tradition for the U.S. president to declare December 15 Bill of Rights Day.

George Washington ordered the production of 14 handwritten copies of the Bill of Rights, which was ratified on December 15, 1791. Congress and each of the original 13 states received a copy. In 1991, the Virginia copy went on a 200th-anniversary tour around the United States, visiting each of the 50 state capitals. That same year, a bill was introduced in the U.S. House of Representative to authorize the minting of coins commemorating the event; on May 13, 1992, the bill was signed by the president and became Public Law no. 102-281. (The full text can be read here.)


The coins were released in (and dated) 1993. The half dollars were produced at West Point (Uncirculated) and San Francisco (Proof); the silver dollar, at Denver (Uncirculated) and San Francisco (Proof); and the $5 gold coin at West Point (Proof only). In addition to being sold individually, they were included in the 1993 Prestige Proof Set, Young Collector’s Set, and Coin and Medal Set. They were also included in an all-new Mint product: a Commemorative Coin and Stamp Set.

The following descriptions of the three commemorative coins are from A Guide Book of United States Coins 2017.

The half dollar in this series depicts James Madison penning the Bill of Rights. It was designed by Mint sculptor T. James Ferrell. The reverse, by Dean McMullen, displays the torch of freedom. Some 9,656 of the Uncirculated version were privately marked on the edge with a serial number and the initials of the Madison Foundation and the American Numismatic Association. (Editor’s note: This was only the second commemorative half dollar to be struck in 90% silver rather than a clad composition. The first was the 1982 George Washington 250th Anniversary of Birth commemorative half dollar.)

A portrait of James Madison is shown on the obverse of this silver dollar, designed by William Krawczewicz. Dean McMullen designed the reverse, which shows Montpelier, the Virginia home of James and Dolley Madison.

The obverse of the five-dollar gold coin was designed by Scott R. Blazek. It features Madison studying the Bill of Rights. On the reverse, by Joseph D. Peña, is a quotation from Madison, accented by an eagle, torch, and laurel branch. (Editor’s note: The text reads, “Equal laws protecting equal rights are … the best guarantee of loyalty and love of country.”)  ❑