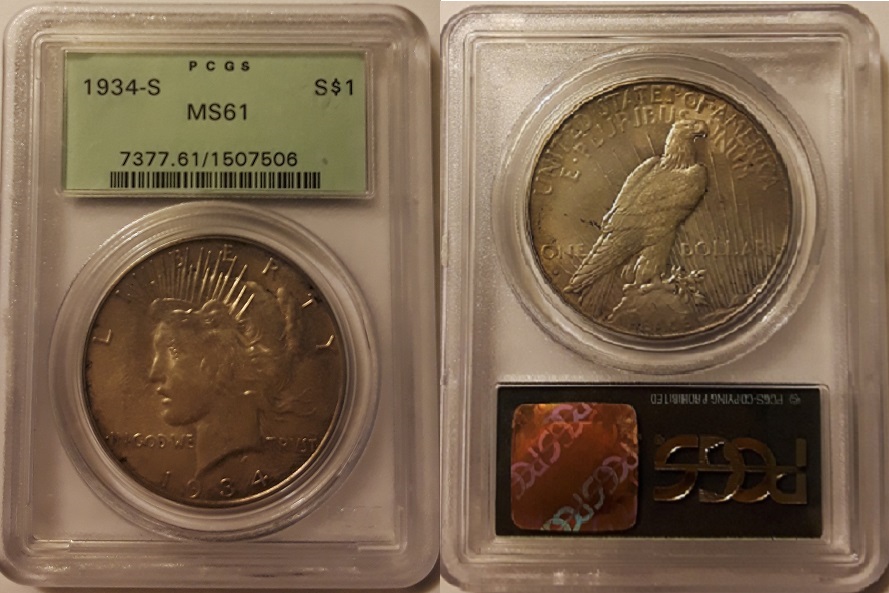 This is one of my most expensive coins, in an old green holder tucked in my bank box, with surfaces that might justify a few higher points on the Sheldon 70-point scale. But it has unsightly toning, justifying the MS-61 grade.

The eye appeal is substandard. Here’s the upside, however: If a lightly worn key date Peace dollar such as this could advance two points to MS-63, the retail price jumps from $2,400 to $4,500.

So I decided to send in the coin to the PCGS Restoration Service.

In November 2012, PCGS announced reconsideration and restoration services. Coin Update was among the first to do an in-depth article about that. You can read it by clicking here.

I previously sent in this coin for reconsideration services. PCGS does not crack out the coin from its old green holder unless the graders believe the coin merits a higher grade of your choosing (full point, plus, suffix such as “Cameo”). Mine was sent back with the same grade in the same holder.

I carefully re-inspected the coin one more time and believed the toning and eye appeal were keeping the coin at MS-61, so perhaps an acetone bath or other non-invasive restoration could be the answer. I’d leave that up to PCGS.

Restoration services involve a three-step process and take longer than stated turnaround times for regular submissions—about 4–6 weeks. Mine was received on June 28 and returned on August 17. You also have to submit a special form, which you can download online at this URL.

In order to submit, you have to be a member of the PCGS Collector’s Club or an authorized dealer. You can submit PCGS or raw coins. If you submit coins holdered by other companies, you must give PCGS permission to crack out the coin if you want it restored. Modern coins up to a value of $1,000 are eligible, with a $22 restoration and grading fee. General submissions (the category under which my 1934-S fell) have a potentially higher grading and restoration fee, or 2% of the value of its final grade, with a $30 minimum charge.

Some coins are not, and there is a fee structure for that too. Here’s a table about that from the PCGS website:

PCGS Restoration follows a three-step process: Coins are evaluated to see if they can be restored; those that can are restored and graded; the final product is covered by PCGS guarantees.

Restoration also promises that any PCGS coin submitted for the service will not decrease in grade.

PCGS removes contaminants like putty and grease by coin doctors. It can remove PCV, dirt, or debris. Some spots can be removed, along with recent fingerprints. Of course, restoration will not consider scratches, dings, planchet flaws, or bending.

The issue of toning, however, is more complex. here is how PCGS describes it:

So my 1934-S probably fell into this category.

It didn’t pass PCGS’s test and was returned without any restoration, probably because removing the toning might have done little for eye appeal in this case.

But I actually wanted to know the reason the coin was returned.

I asked Don Willis, PCGS president, if in the future PCGS Restoration could inform customers why a coin was deemed unrestorable. After all, the company does that with submissions deemed genuine or ungradable, such as cleaned or environmentally damaged coins.

“There are many reasons why we would choose not to restore a coin,” Willis said. “These reasons could range from a coin having multiple problems, to a coin that doesn’t need to be restored at all.  There are far too many reasons for us to list. Compare this to details grading, where there are a limited number of details grades.”

That does make sense.

Also, PCGS has an online article advising when to submit to Restoration. You can read about it here.

Given the value of this coin, it doesn’t make sense to tinker with it. If it were a common coin, I might have. As a numismatist, I know and have explained (with all the requisite cautions) in Coin Update how to clean and conserve some coins, as in the article, “Is There a Safe Way to Clean Coins?”

For instance, I often bid on coins with PVC damage because I can use common coin cleaners, such as MS-70, to remove that without harming the surface. Here’s an example of coins stored in a soft vinyl flip that causes such damage.

Nevertheless, I don’t recommend you try to clean coins, unless you are an experienced hobbyist and have learned the trade from a mentor or coin dealer, as I did. As always, cleaning even with the right non-invasive process often does as much as harm as good. You’re taking a risk.

Have you tried PCGS Restoration or NGC Conservation Services? If so, tell us about the results or anything else concerning restoration.

Review of NGC versus PCGS