Anyone who has submitted to one of the two major grading services has felt the letdown of lower than anticipated grades, perhaps wondering how the rival service might have evaluated the same coins–especially when those coins seem to possess deep mirrors.

Coin Update News decided to test that, first by purchasing from a reputable dealer five coins designated as having deep-mirror surfaces, sending them to PCGS and then cracking open those holders for resubmission to NGC.

Before disclosing the results, we will provide pictures and background information about the submission.

These five coins were purchased from a long-time Proxibid auctioneer whose company, Silver Trades, not only provides multiple photos of each coin but lengthy descriptions, often with a buyback guarantee if PCGS or NGC deem a coin ungradeable for any reason.

Here’s how Silver Trades described the five coins in its catalog:

Here are pictures of the coins as displayed in the Silver Trades catalog (click any image to enlarge). 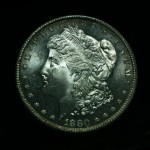 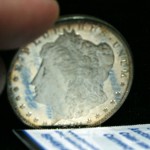 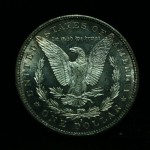 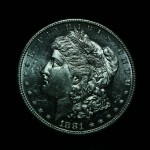 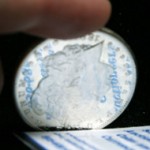 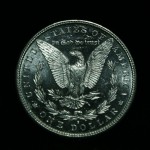 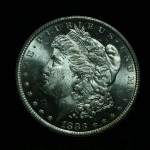 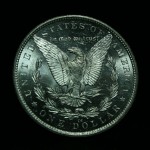 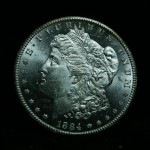 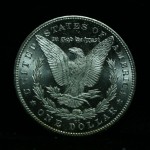 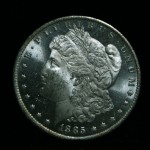 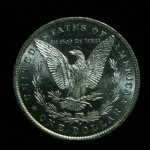 When I received the coins, I felt the catalog descriptions were accurate for the most part, but that getting deep-mirror designations from PCGS or NGC was going to be difficult.

Generally, a semi-prooflike coin should reflect your finger at a distance of 1-2 inches; prooflike, 2-4 inches; and deep mirror prooflike (or “DMPL”), 4-plus inches.

The “DMPL” designation also has other requirements. Devices should be frosted with uniform reflectivity at 4-plus inches–on both sides of the coin. In other words, if a section of either obverse or reverse is duller without deep reflectivity, an otherwise “DMPL” coin could test prooflike or worse (no prooflike designation whatsoever).

On each of the coins, I noticed a small patch of duller than “DMPL” reflectivity.

But the coins were beautiful in their own right. Their cost was close to $1600 for all five, which would have been a bargain if they graded as described in the Silver Trades catalog. Deep-mirrored coins for these dates would be worth collectively between $2700-$3000.

Not one graded “DMPL.”

What was gained with the 1880-S coin at NGC was lost in the 1885-O coin, meaning both services essentially graded the set of coins similarly. Their collective worth was about $800.

This is the gamble we take purchasing raw coins online, even from the most knowledgeable auction companies, like Silver Trades, which unlike many houses offers buyback guarantees on select coins like these.

Many hobbyists claim that grading is a subjective exercise, and it is to a degree, as this exercise documents–a degree of one point in the 1880-S and one less “prooflike” label in the 1885-O.

On occasion, one of the two major companies get a grade wrong. But their reputations are earned through consistency, and grades here by both companies fall into that category.

On a personal level, I feel that these coins are worth more than $800. They failed in large part because I could not see the small duller patches undermining reflectivity and thereby depriving them of “DMPL” and even “prooflike” designations.

I would not have made the same mistake purchasing them at a coin shop and inspecting them first-hand with a loop. That said, I also would likely have paid close to $1600 if I purchased these premium-quality coins at a coin show without the knowledge of what qualifies as “semi-prooflike,” “prooflike,” and “deep mirror prooflike.”

In the end, that’s what this post is about. Make sure the coins have frosted devices with no duller patch of reflectivity. You’ll also need uniform reflectivity of 4-6 inches before having a shot at the coveted “deep mirror” designation.

You may not be able to do this with an online purchase. So take your chances, or only purchase prooflike and deep-mirrored coins already holdered by PCGS and NGC.