Coverage from Day Two of the 2014 World Money Fair held in Berlin, Germany.

At this year’s World Money Fair in Berlin, several surprises were unveiled during the event’s Technical Forum which is held one day before the official opening of the World Money fair itself. The technical Forum offers the opportunity for Mints and coin production suppliers to showcase their developments and new innovations to the industry in a presentation format with question-taking afterwards. 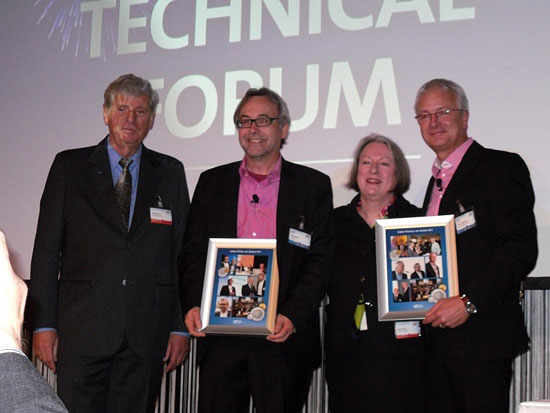 This was also the tenth anniversary of the Technical Forum which was observed with a presentation to two of the forum’s hosts Dieter Merkle and Thomas Hogenkamp who were presented with plaques marking this important milestone.

Austria’s two-tone green & blue coloured niobium and silver coin was the topic of their presentation.

From the actual minting process to security in coins and tooling software, there were eye-opening innovations which were highlighted to a packed house of more than 300 participants and observers. The Mint of Austria – who were the guest hosts for this year’s World Money Fair, show-cased their second generation niobium coins with a process of two-toned colorization, whereas the relief portion of the coin shows as a second color to the surface color. The aspect of the result was described but – the actual process remains a trade secret of the Austrian Mint. The coin highlighted was their new “Dawn of a new era” niobium & silver item, (http://www.muenzeoesterreich.at/eng/produkte/r-evolution) which sold out during the WMF’s two-day event. 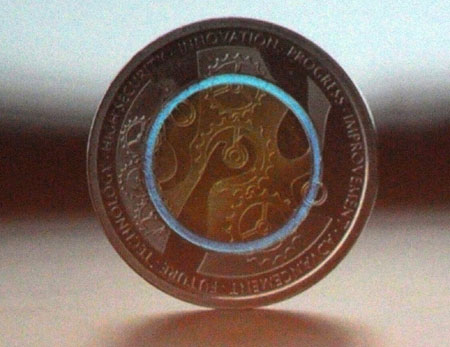 Innovative bi-metalic coin with an added “see-thru” polymer element was the hot topic of discussion during & after the technical forum.

A second presentation which also stood out for its unique approach to advances in minting or innovation was a coin which includes a polymer transparent or translucent ring which fuses together any bi-metalic coin. The center ring appears as either clear or tinted and when held up to the light, there is a halo effect. The process was highlighted as a new security element. Presented jointly by the Staatliche Münzen Baden-Württemberg and the Bayerisches Hauptmünzamt München, the coin and its development was the focus of keen interest by the audience for its “see-thru” element.

The graphics side was also represented for the first time by the software company DELCAM PLC – ArtCAM whose founders Robert Newman and Timothy Buck discussed their own new state-of-the-art programs currently being used by much of the tooling sector for outstanding design results. Their software was used to develop cutting edge innovations currently being seen on noteworthy coins (many of the designs being honored at this year’s COTY awards) and utilized in the minting industry for optimum results. (http://www.artcam.com/)

In total, eighteen speakers representing twenty three entities presented their latest developments in just over a five hour forum. A complete list of speakers and their topic of discussion is available on-line at: http://www.worldmoneyfair.de/wmf/wp-content/uploads/sites/2/2013/06/WMF14_TF_140128_web.pdf