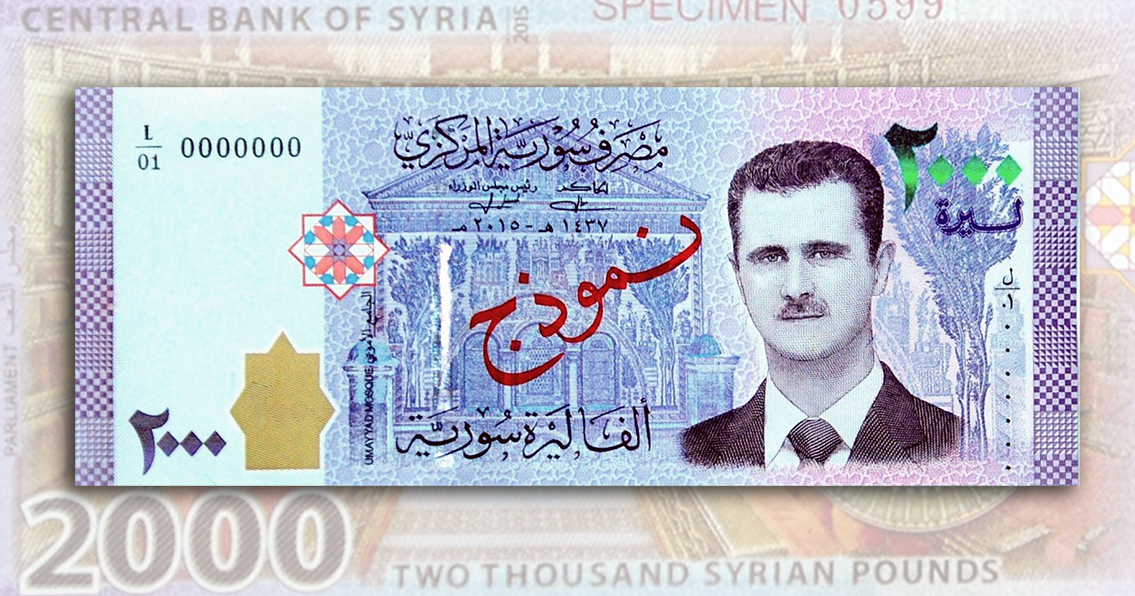 The Central Bank of Syria have released (2nd July) their latest and, thus far, their highest-denomination banknote in their current series of notes (initially dated 2009 and placed into circulation in 2010). The 2015-dated note includes an image of the country’s current president, Bashar Al-Assad, who assumed the presidency of Syria upon the death of his father, Hafez Al-Assad, in 2000. It is the first time that this president appears on circulation currency. Previously, Hafez Al-Assad appeared on a 1997-dated 1,000-pound banknote, which is currently legal tender despite the issuance of a new version of this note last year, dated 2013.

On the release of the new banknote, Central Bank Governor Duraid Durgham confirmed the 2,000-pound note was one of several new note denominations printed some time ago, but said that the decision to release the 2,000-pound note into circulation was delayed “due to the circumstances of the on-going war and exchange rate fluctuations.”

The face of this note—whose dominant colour is purple with corresponding underprint shades—includes a portrait of Bashar Al-Assad based on his official portrait, which is positioned on the right side. An image of the front edifice of the Umayyad Mosque, also known as the Great Mosque of Damascus, is placed in the centre.

The back depicts an image of the internal chamber of the parliament.


The new note is equal to just under US$3.90 at current exchange rates, as the currency has plunged in value since the civil war began in 2011. The Syrian pound has seen its exchange rate fall from 47 pounds to the U.S. dollar in 2010 to around 500 pounds to the dollar at present. Another reason cited for the issuance of the new denomination was the wear and tear on the existing notes, ranging in values from 50 pounds to 1,000 pounds. As the country copes with the conditions of war in several regions, the note has been issued only in Damascus and a number of the provinces not adversely or directly affected by the fighting. The latest series of banknotes currently in use were initially released in 2010 and are thought to be printed in Russia. They include a variety of security features and safeguards including a latent image application, colour-shifting ink used to print the number 2000 in Arabic script, and a watermark with security thread.   ❑