The Royal Australian Mint have launched a new coin which perfectly blends both the celebrations of New Year’s Eve and the City of Sydney & its iconic Bridge with a design that utilizes the latest holographic technology.

In a program co-sponsored by the City of Sydney, Lord Mayor Clover Moore said, “The commemorative coin would become a collector’s item and would be the first in a 10-year series to be released on the 1st of January each year.” Further adding “Each year, tourists and Sydneysiders ask whether they are able to take home a special memory of Sydney New Year’s Eve, so for the first time we’re creating this special piece of memorabilia.” 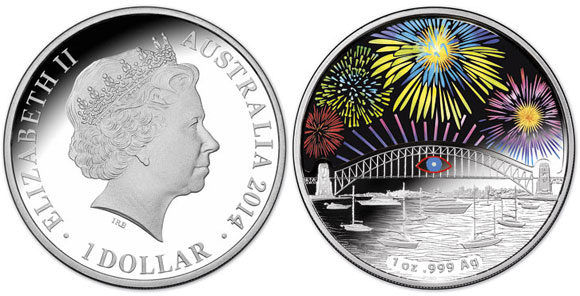 Designed by Royal Australian Mint artist Aaron Baggio, the fine silver proof coin will feature a color hologram that changes to show the bursts of light appearing over the Sydney Harbor Bridge during the world-renowned Midnight Fireworks display.

Also featured on the coin is a special symbol that was revealed at midnight on New Year’s Eve. The ‘all-seeing’ eye is Sydney New Year’s Eve Creative Ambassador Reg Mombassa’s key artwork feature, which appears at the center of the coin. Each year the theme will change as this coin is the first of a ten year series. This year the theme is Shine, celebrating Sydney as a city where the sun, the water and the people shine.

The obverse includes the current circulation coin portrait of HM Queen Elizabeth II designed by Ian Rank-Broadley along with the year of issue “2014”.

For more information on this and other coins on offer from the Royal Australian Mint, please visit their website at: https://eshop.ramint.gov.au/2014-1-Sydney-Holographic-Coin/210313.aspx Information offered in English – international orders dispatched.