The Royal Australian Mint have announced that a new colorized coin will enter circulation from the 20th April which pays tribute to the country’s ANZACs, that of the Australian and New Zealand Army Corps, the service organized as part of the two country’s response to joining the United Kingdom at the start of the Great War – later World War I.

The First World War army corps of the Mediterranean Expeditionary Force was formed in Egypt in 1915 and operated during the Battle of Gallipoli. The fighting force comprised troops from the First Australian Imperial Force and 1st New Zealand Expeditionary Force. The corps was disbanded in 1916 following the Allied evacuation of the Gallipoli peninsula and the formation of I Anzac Corps and II Anzac Corps.

Just ahead of Anzac Day 2015, the Parliamentary Secretary to the Treasurer, the Hon Kelly O’Dwyer MP, announced that Australia’s newest red-colored circulating coin will be released as part of the Royal Australian Mint’s Official Anzac Centenary Coin Program where a collection of commemorative coins capture the history, service, and sacrifice of Australians at war. Commenting on the imminent release of the commemorative coin, Ms. Dwyer stated, “There will be approximately one and a half million coins released into circulation over the coming weeks which will provide an opportunity for the public to be able to secure a keepsake for the Centenary without having to purchase one.” 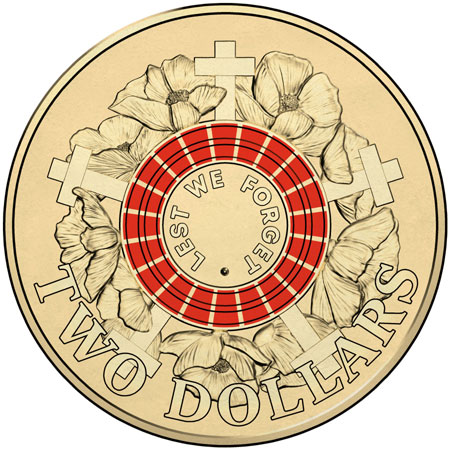 The commemorative $2 coin, designed and produced by the Royal Australian Mint, depicts a centrally sculpted and emotive design. It features poppies, symbolic of remembrance, amongst crosses used to honor the fallen and mark the graves of unknown heroes. Inspired by the poppy, the distinctive and powerful red colored print encapsulates the solemn words ‘Lest We Forget’. 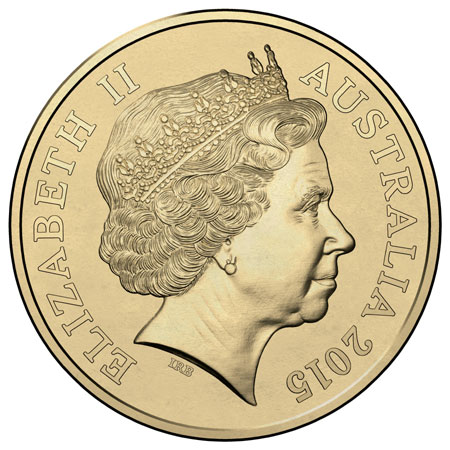 The obverse includes an effigy of HM Queen Elizabeth II as designed by artist Ian Rank-Broadley and in use on Australian circulation and many commemorative coins since 1999.

The new coin was officially launched at the Anzac Centenary March hosted by the Parliamentary Secretary to the Treasurer in partnership with the City of Stonnington and the Higgins Centenary of Anzac Committee. The March included descendants of those who served in the First World War. The Royal Australian Mint’s Official Anzac Centenary Coin Program will be an ongoing theme for the Mint during the 2014-2018 commemorative period.

For more information on this and other coins offered by the Royal Australian mint, please visit their website at: http://www.ramint.gov.au/designs/products/ACCP_info.cfm Information offered in English, international orders dispatched.