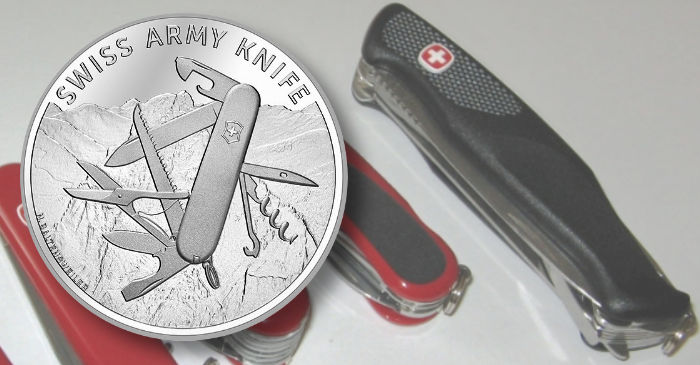 The Swiss Federal Mint has released (10th September) new silver collector coins which are minted to commemorate one of the country’s most iconic items which has traveled around the world as an ambassador and example of Swiss efficiency and practical design: The classic Swiss Army knife.

On the 100th anniversary of Karl Elsener’s death, the man who invented the concept of a pocket mechanism with a variety of practical uses and founded the company which has manufactured the Swiss Army knife since 1891, the new coins are dedicated to the idea behind this innovative Swiss invention. The Swiss Army knife has essentially been coveted and valued by tens of millions of outdoorsmen, scouts, soldiers, and anyone who found the need for a variety of essential tools to be at their reach in one device.

Back in the 19th century, it is difficult today to believe that Switzerland was, in fact, one of the poorest states in Europe. As a result of the high unemployment Switzerland faced, these conditions forced many Swiss to emigrate. Anytime a Swiss manufacturer was able to create a number of factory jobs, this initiative was therefore greeted with open arms. With this in mind, Swiss-born Karl Elsener (1860–1918) founded a cutlery workshop in Ibach in 1884. He learned this trade during his apprenticeship in Zug and his time as a journeyman in France and Southern Germany. Karl Elsener came up with the idea of manufacturing soldiers’ knives which had previously been made in Germany, wanting to manufacture these items in Switzerland next. However, because his new business was too small to obtain orders from the army, it was this primary reason that Elsener founded the Swiss Cutlers’ Association. The main aim for this new association was to encourage the manufacturing of the soldiers’ knives for the army collectively with other cutlers in Switzerland. The contracts for the new soldiers’ pocket knives were eventually procured and the first delivery was made the same year. At this time, the compact knife pioneer would probably never have dreamed that his efforts and small enterprise would one day become a world-famous company.

The first types of the soldiers’ knives were very well-made and robust, but also relatively heavy, so Karl Elsener developed a lighter and more elegant knife with even more functions. He called this pocket knife model the “Officer’s and Sports Knife” and had its design and name legally protected in 1897. However, unlike the soldier’s knife, the officer’s knife did not become official army equipment, but this exception did not affect its success in terms of sales and popularity. The “Swiss Army knife,” as the officer’s knife was to be referred to for its export market, began to conquer the world, especially after the Second World War. Its worldwide popularity had U.S. soldiers based in Europe to thank for its eventual market in the United States and beyond. Soldiers would buy them in large quantities as a popular souvenir for when they returned home, passing them on to their young sons in the Boy Scouts, finding these practical utilitarian knives essential camping equipment.

The knife’s resurgence on the souvenir market in the 1970s has helped Victorinox, the company founded by Karl Elsener, to achieve worldwide recognition. Victorinox AG is now run by the fourth generation of the Elsener family. 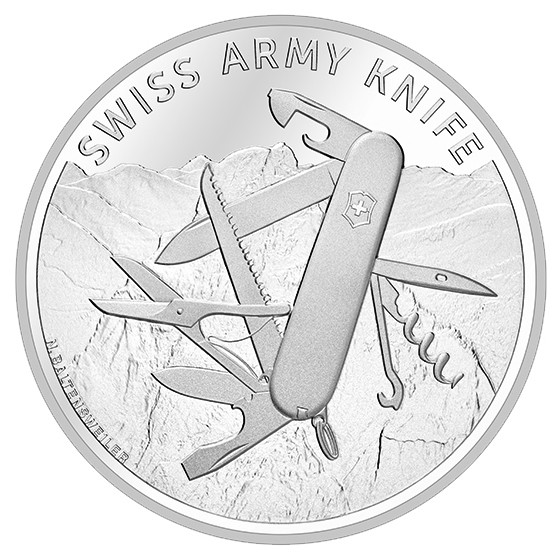 The coin is designed by graphic artist Nadja Baltensweiler from Lucerne and depicts the familiar view of the Swiss Army knife, with just about every tool included in one of the deluxe models, unfolded, and spaced apart for inspection. The knife is superimposed against the view of the Swiss Alps. The English text above the primary design reads SWISS ARMY KNIFE. 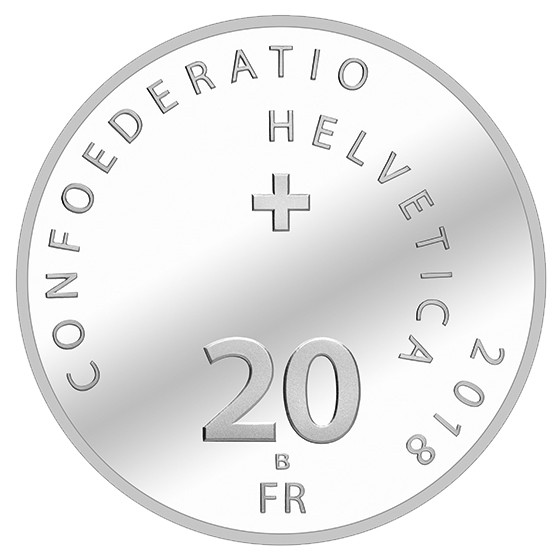 The obverse includes the standard design with the issuing authority CONFEDERATIO HELVETICA, the year of issue, 2018, and the denomination of 20 FR in a circular pattern. 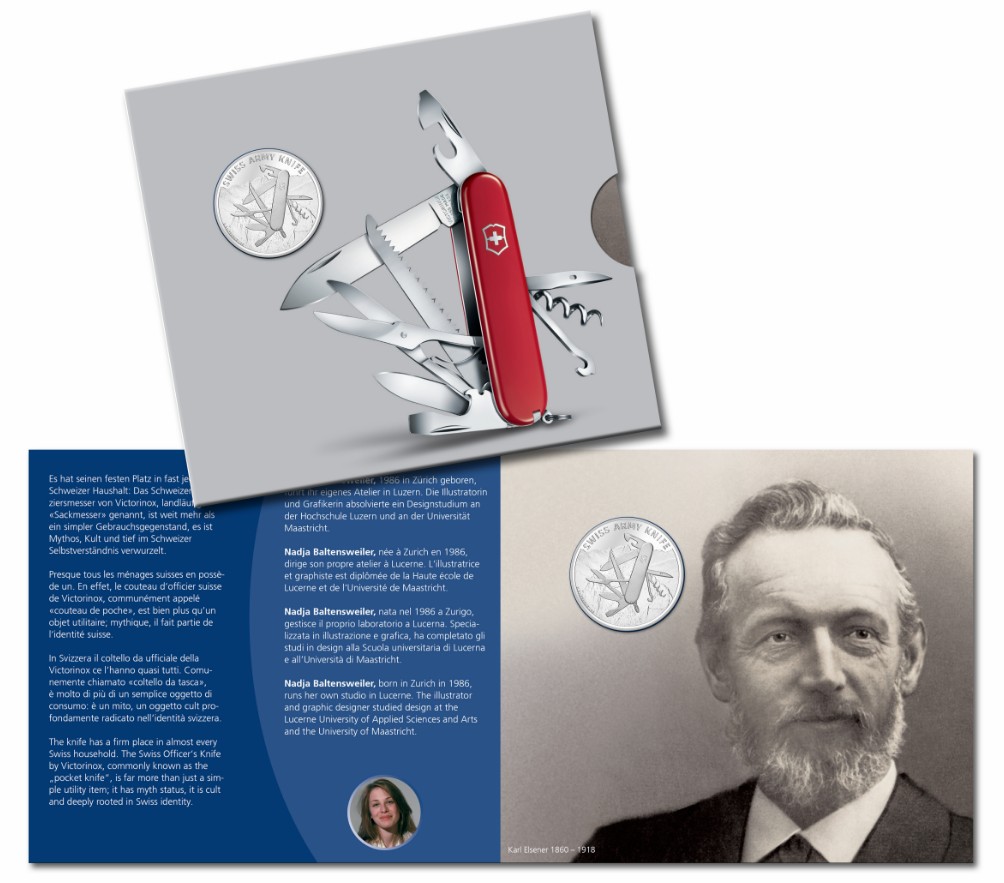 The Brilliant Uncirculated versions are limited to *30,000 pieces with 25,000 coins being included in a blister pack and 5,000 coins in a specially prepared folder. The Proof coins are encapsulated and included in a presentation case accompanied by a numbered certificate of authenticity.

The Swiss Army knife collector coins and the 2018 Christmas coin set will be the final issues of the year. The special holiday-themed coin set contains a medal designed by Jenny Leibundgut from Bern and depicts a trumpet-blowing Christmas angel and with the snow stars on the medal and the case, they convey the Christmas and holiday spirit. For additional information about the Swiss Army knife collector coin and the 2018 Christmas coin set, please visit the website of the Swiss Federal Mint.

Switzerland: New gold coin is dedicated to the legend of William Tell, the most famous Swiss persona