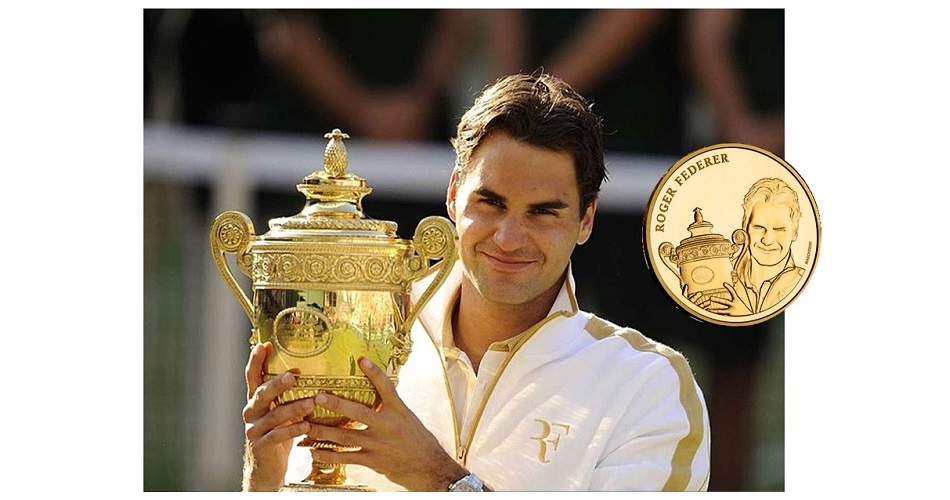 The Swiss Federal Mint has launched (3rd September) 2020-dated 50-franc commemorative gold coins, which, for the first time in its history, is dedicated to a living person — tennis legend Roger Federer. These commemorative coins follow up from the immensely successful silver Brilliant Uncirculated, and Proof coins launched last December which sold out within a day. As well as probably being Switzerland’s most successful individual sportsman, Federer is considered by many Swiss to be the perfect ambassador for Switzerland. For this reason, the Swiss Federal Mint first honoured Roger Federer with 2020-dated 20-franc silver coins.

In terms of general notoriety or name familiarity, there is no other Swiss person in the world as well-known as Roger Federer. His tennis records rival no other athlete and in so short a time-frame as Federer spent 237 consecutive weeks as world number one, in terms of his ranking. He holds the greatest number of grand slam men’s singles titles, 20 of them in all — including eight Wimbledon men’s single’s titles, which are included in his overall 103 singles titles so far. These records, as well as his versatile playing style, make him probably the greatest tennis player of all time. But Roger Federer is just as active off the court, setting up a foundation to support financial aid projects for children in 2003. Moreover, in 2006, he was named as the first Swiss national UNICEF goodwill ambassador. His sporting achievements, his charitable commitments, his easy-going nature, and his accessibility to his fans and much more have prompted the Swiss Federal Mint to dedicate a second new commemorative coin, this time, gold 50-franc coins — the first time any Swiss coinage was issued with the image of a living person.

Designed by graphic artist Remo Mascherini, from Flamatt in the canton of Fribourg, the obverse side depicts the eight-time Wimbledon men’s single’s title winner holding one of the trademark trophies after the presentation. The actual photograph which inspired the design of these coins was taken during the 2009 tournament — Federer holds the men’s single’s coveted trophy after he was presented with it by HRH the Duke of Kent on the court. The inscription of ROGER FEDERER is placed along the upper-right edge of the coin. The reverse side is that of the standard design with the issuing authority CONFEDERATIO HELVETICA, the year of issue, 2020, and the denomination of 50 FR in a circular pattern. 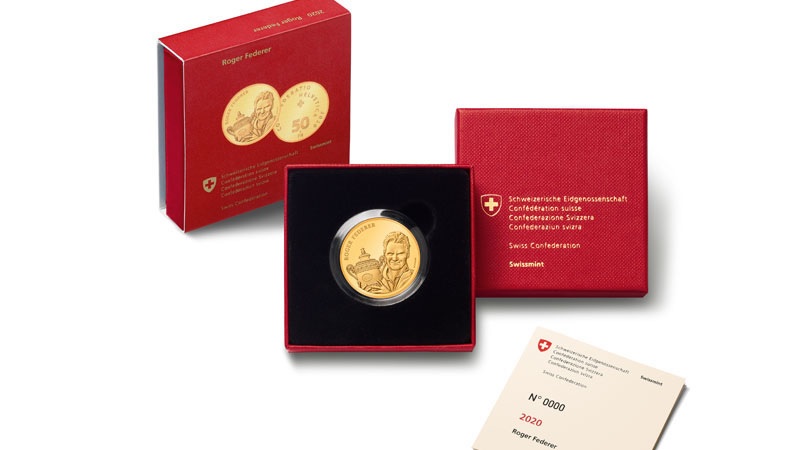 Each gold Brilliant Uncirculated strike is encapsulated and presented in a heavy-gauge card case and accompanied by a certificate of authenticity. A separate consignment of *500 pieces will include a signed certificate of authenticity with Remo Mascherini’s signature. For additional information about this coin and other coins offered by the Swiss Federal Mint, please visit their website.