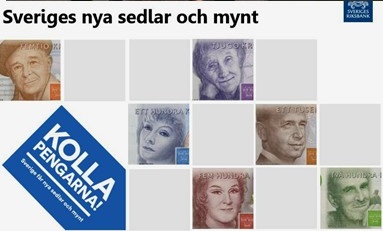 The Sveriges Riksbank, or the National Bank of Sweden, has officially issued (1st October) four of its six new banknote denominations as part of a series that focuses on personalities from the fields of literary, visual, and audio arts. The new series entitled “Cultural Journey” was announced four years ago when the National Bank confirmed they would be replacing the current series of notes with new designs; in the case of a 200 kronor note ($US 24), a new denomination will be introduced.

The National Bank conducted a news conference yesterday hosted by National Bank Governor Stefan Ingves and the National Bank’s technical note expert Mårten Gomer. They drew attention to the fact that the public had been encouraged to come to the Bank’s headquarters and exchange their current banknotes for a new 200 kronor note.

The current 20 and 50 kronor notes, originally issued in 1986 and modified over the last decade, will remain legal tender until June 30, 2016. The 100, 500, and 1000 kronor notes will retain their validity until June 20, 2017, after which time they can only be redeemed by post; there will also be a fee of 100 kronor charged by the National Bank for this service, with no limit on the amount of notes redeemed per transaction. 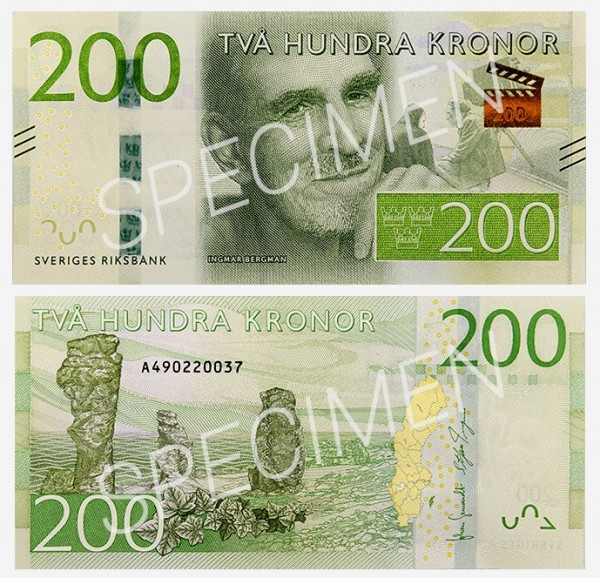 The chosen regions depicted on the reverse have a known link to the persons chosen. Evert Taube grew up in Vinga and many of his songs are inspired by the Bohuslän archipelago. Ingmar Bergman lived on Fårö, an island off of Gotland, during the latter part of his life. Dag Hammarskjöld was very fond of Skåne, Lappland, and the Swedish mountains. Birgit Nilsson grew up in Västra Karup in Skåne. Astrid Lindgren grew up in Vimmerby in Småland and gained much of her literary inspiration from this region. Greta Garbo grew up in the Södermalm region of Stockholm.