The Royal Mint have issued the new Britannia series with a stylish and classical new design as well as new products including for the first time, five ounce sizes for both silver and gold options. From 2013, the Britannia range will now include two design versions – that of the traditional depiction of Britannia by Philip Nathan as originally introduced in 1987 and a new second design which will be produced for one year only, this ensures that the Britannia range changes annually while also retaining a traditional and continual aspect for collectors of all tastes and budgets. 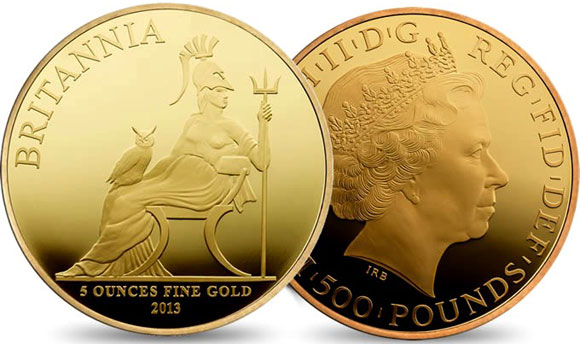 The first coin for this program will see a sleek design of a seated Britannia as sculpted by Robert Hunt, who gives this iconic and ancient figure a more focused look with a significant amount of clear field in the foreground while paying specific attention to every detail. At first she appears traditional, her seated pose and classical robes lending a familiar air – bringing to mind the iconic reverse design of the previous 50 pence coin designed by Christopher Ironside. However, here she is seen with her head turned – as though to listen to the world, she is interested in lands beyond her borders, a wisdom symbolized by the owl. 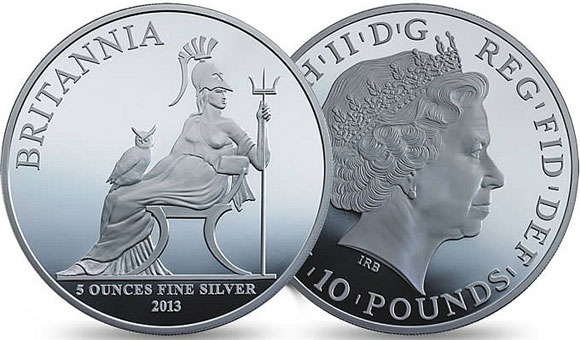 Created for Roman coins almost 2,000 years ago and appearing on the coins of every British monarch since 1672, the figure of Britannia herself is synonymous with British coins as an enduring symbol and as a constant yet changing face of Britain. Britannia has long been a symbol of Britain, created by the Romans to personify this rocky outcrop of the Empire but enduring long after the invaders left these shores. She was resurrected in Tudor times and recalled to the coinage by Charles II. In 1987 the Britannia bullion series of coins were introduced, and from this new issue, she begins a new chapter. Britannia and her image is so strongly linked with the coins of Great Britain that her use is protected in law – and only Britannia coins produced from The Royal Mint are genuine.

The proof coins range will become a showcase for Britain’s best artists, and beginning with the products of 2013, a new design each year will be seen only on the Proof range – and this one Brilliant Uncirculated silver coin.

The Royal Mint are now taking pre-orders for dispatch & delivery in late July. For more information on these and other coins offered by the Royal Mint, please visit their website at: http://www.royalmint.com/our-coins/ranges/britannia Information offered in English – international orders fulfilled.