The Royal Mint have announced that they are to issue an historical medal specially commissioned two hundred years ago to mark the victory over Napoleonic forces during the battle of Waterloo. The re-issue is to mark the 200th anniversary of The Battle of Waterloo and pay tribute to those who never received this magnificent honor.

The history of the medal itself is as compelling as the circumstances which emerged to commission the medal in the first place. The medal, often referred to as “a masterpiece of minting art” is also a life’s work of the numismatic genius, Benedetto Pistrucci (1783 – 1855) which ultimately took the master medalist 30 years to complete. The plan was for the medal to be presented to the heads of the allied countries and the commanders involved in the battle as a majestic tribute to great men, but tragically Pistrucci’s Waterloo Medal went un-struck in his lifetime and was never received by its intended recipients. Once the extraordinary design was complete, it was found the medal could not be struck due to its sheer size – the technological necessities not being available at the time, and sadly, all those due to receive the medal had since died. 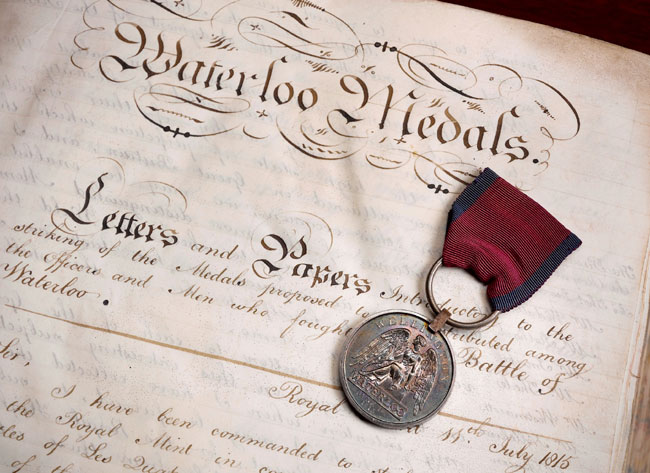 After the epic battle had finished raging, The Royal Mint struck more than 37,000 Waterloo Campaign Medals, created by Thomas Wyon to mark the bravery of those who fought in the conflict. The Waterloo Medal was awarded to any soldier of the British Army who took part in the Battle of Waterloo and any soldier receiving it was known as a ‘Waterloo Man.’ The roll that lists the name of every man to receive the medal is held at The Royal Mint Museum and more than 37,000 medals were produced by The Royal Mint under the supervision of William Wellesley-Pole, then Master of the Mint and brother of the Duke of Wellington. 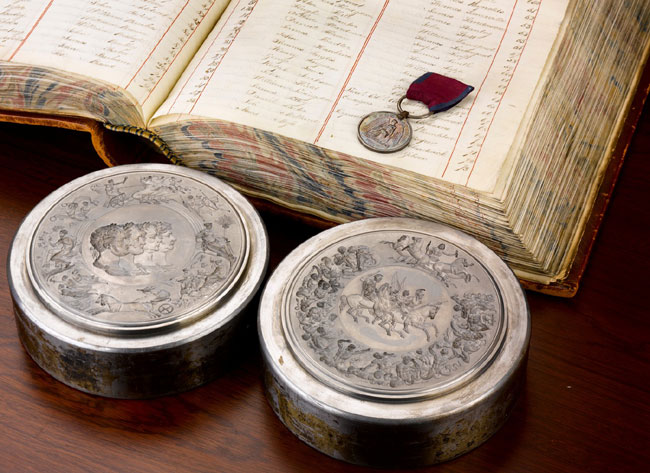 Another accolade was then commissioned, a second, splendid medal by the Royal Mint’s own renowned engraver Benedetto Pistrucci. On the occasion of the 200th anniversary which is being observed this year, Pistrucci’s conceptual workings and original tools have been revisited by The Royal Mint in order to complete the medal, resplendent in all its glory and bearing the original inscriptions as wrought by the master engraver’s own hand – never before seen on a medal. The ornate medal bears Pistrucci’s original design, inspired by Greek mythology, as you might expect from the creator of the legendary St George slaying the dragon that is seen on many Sovereigns and silver crowns since the reign of King George III, this design has continued to be utilized for nearly two hundred years! 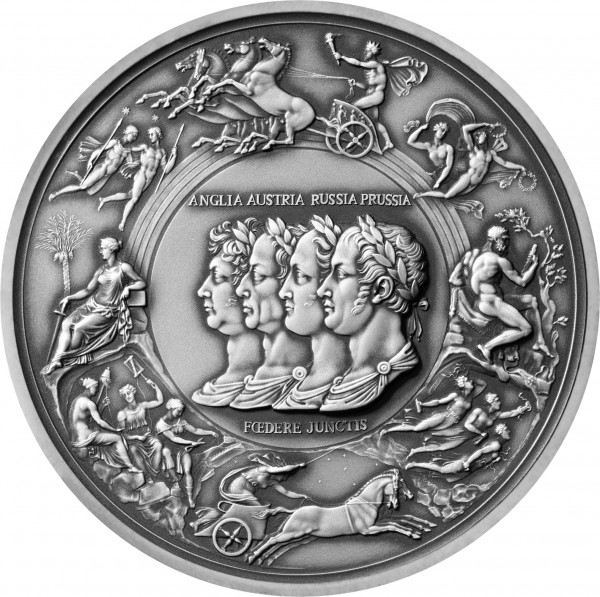 The extraordinary design depicts the heads state of the four allied nations which feature at the center on the obverse. The Crown Prince & Regent (later King George IV), the Emperor Francis II of Austria, Czar Alexander I of Russia and King Frederick William II of Prussia. Surrounding these busts is an allegorical representation of the Treaty of Peace that emerged from the battle (the Latin inscription ‘Federe Junctis’ alluding to the treaty itself), based on Pistrucci’s early workings and original vision. The symbolic composition includes Apollo restoring the day and Themis, Goddess of Justice, who is placed next to the sovereigns as a symbol of the importance of order. 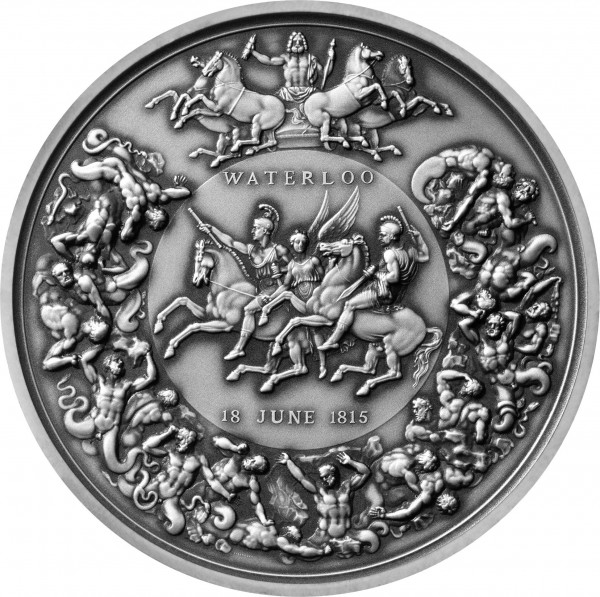 The reverse represents the mythical ‘Battle of the Giants’ where the giants are said to have unsuccessfully challenged the Olympian Gods. In this composition, Pistrucci depicted 19 figures struck down by the thunderbolts of Jupiter – 19 for each year of the Napoleonic Wars. At the center of the reverse is a pair of powerful steeds, ridden by characters bearing the features of the Duke of Wellington and General Von Blücher, both guided by the winged figure of Victory, who was also depicted upon the Waterloo Campaign Medal.

The medal is available from today – and is housed in a custom presentation easel-box format for display and storage with only 1,815 pieces – in honour of the year of the battle to be minted.

For more information on this medal or to place an order, please visit the Royal Mint product page. Information offered in English – international orders dispatched.