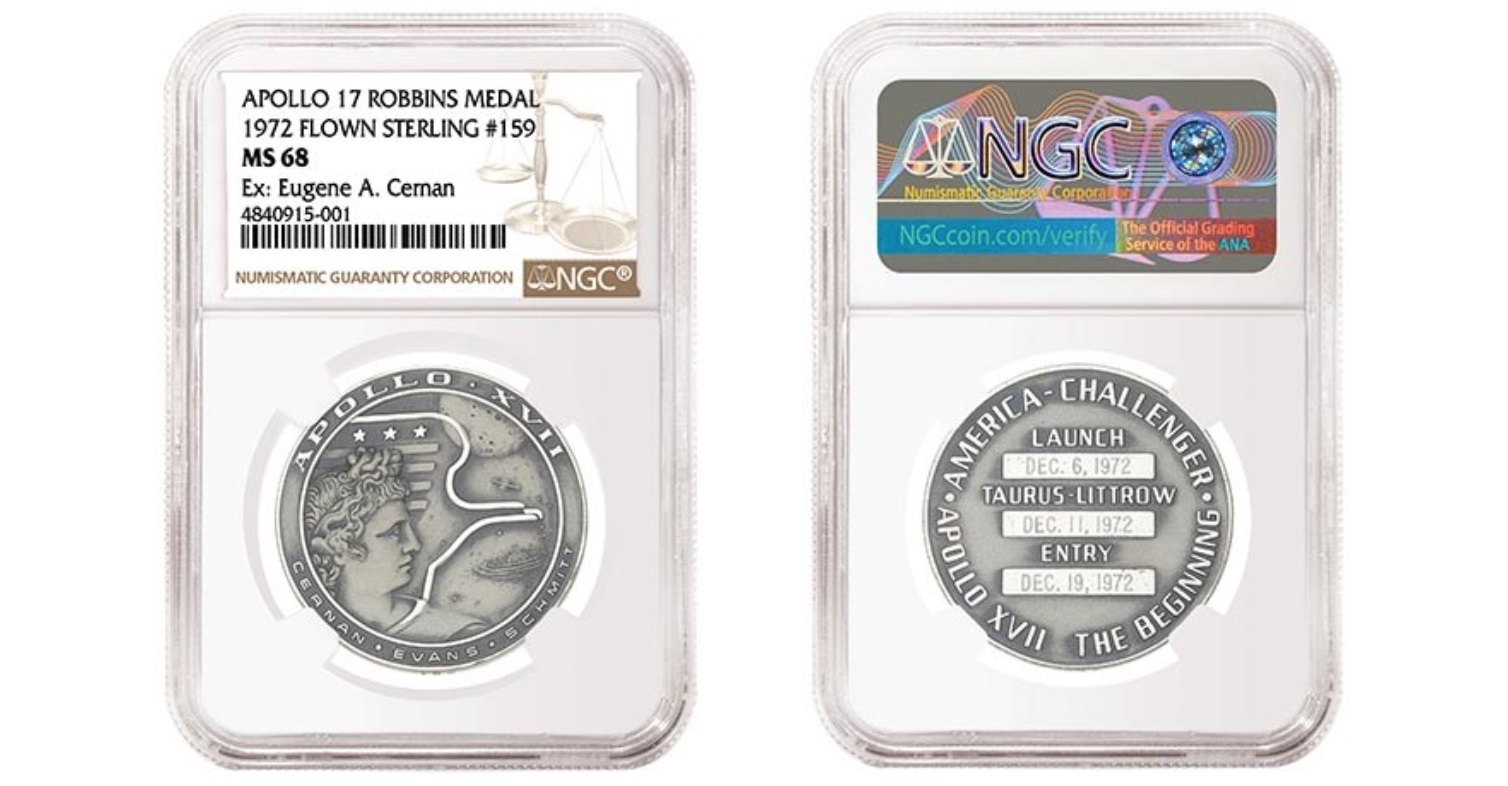 A Robbins Medal flown on the last manned mission to the moon realizes $60,000 at a Heritage auction.

Medals and other important historical items that were certified by Numismatic Guaranty Corporation (NGC) and Collectibles Authentication Guaranty (CAG) realized impressive prices in a Heritage Auctions space exploration sale in June 2020. The artifacts offered in the auction ranged from the dawn of the airplane era to the triumph of the Space Age.

The top lot in the auction was an Apollo 17 Flown Robbins medal graded NGC MS-68 that realized $60,000. The Robbins medals were struck for astronauts to take into space as keepsakes of their mission. This particular example is pedigreed to Eugene Cernan, an Apollo 17 astronaut who was the last person to walk on the moon.

Except for a handful of Robbins Medals from the historic Apollo 11 moon landing mission, this lot represents the highest price realized through a Heritage auction for a Silver Robbins Medal.

Another Robbins medal, an Apollo 10 Flown example graded NGC MS-66, realized $55,000. It is pedigreed to John W. Young, who was Command Module Pilot on that mission, in which the Lunar Module descended to within a few miles of the moon’s surface. The May 1969 mission has often been called a dress rehearsal for Apollo 11 two months later. Young was the first person to fly on six space missions, dating from Gemini 3 in 1965 to the Space Shuttle program in the early 1980s.

Meanwhile, an Apollo 13 Robbins medal graded NGC MS-68 and pedigreed to astronaut Jack Swigert realized $10,000. The flown medals from that harrowing mission were melted down and restruck in order to add the name of Swigert (who was a late substitution for the mission) and to remove the section for the date of the mission’s moon landing (which was scrubbed). 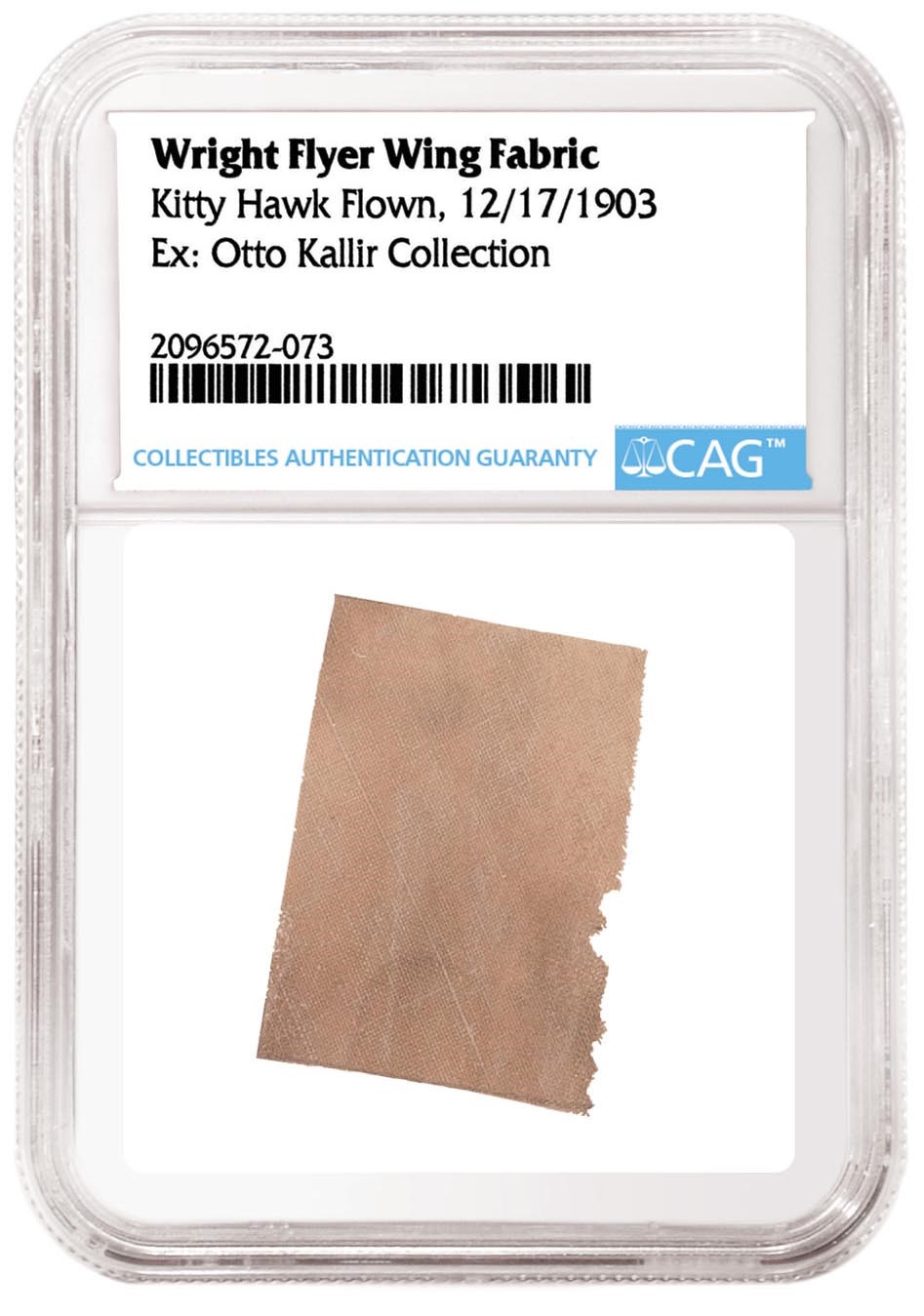 Meanwhile, a CAG-certified piece of wing fabric from the Wright Flyer realized $23,125 in the sale. The rudimentary aircraft flown by the Wright Brothers in 1903 is celebrated for kicking off the modern aviation era, and pieces of it are cherished by collectors.

CAG is an affiliate of NGC dedicated to preserving the provenance of historical artifacts. CAG certified the provenance of this particular example from Otto Kallir, a renowned collector of aviation history who had obtained enough of the wing fabric to build a small model of the Wright Flyer.

“NGC and CAG give buyers confidence in the authenticity, provenance, and condition of their collectibles,” said Mark Salzberg, chairman of NGC and CAG. “Buyers pay more for this confidence as shown by the results of the NGC and CAG-certified collectibles in this sale.”“

Prices realized include buyer’s premium and are expressed in U.S. dollars.