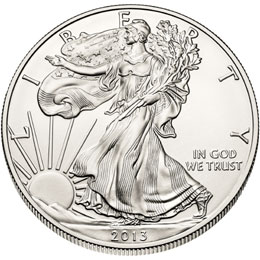 The monthly sales levels for the United States Mint’s American Silver Eagle bullion coins exceeded the year ago levels for a third consecutive month. Through the first quarter, this year’s sales are on pace for a record year despite remaining available under the Mint’s rationing program.

The current annual sales record for Silver Eagle bullion coins was established in 2011 when full year sales reached 39,868,500. During the first quarter of 2011, sales were 12,429,000. This year’s first quarter total is 14.4% ahead of this number, despite being interrupted by a sales suspension in January and continuing to be subject to allocation at the authorized purchaser level. If demand remains strong, a new annual sales record may be in the cards.

For March 2013, American Gold Eagle bullion coin sales measured 62,000 ounces across the various options. This is down from the previous month when 80,500 ounces were sold and also down marginally from the year ago period when sales had reached 62,500 ounces.

The other bullion products offered by the United States Mint contributed relatively minor amounts. The one ounce 24 karat American Gold Buffalo Coins recorded sales of 11,000 for the month. The America the Beautiful Five Ounce Silver Coins added sales of 19,800 coins accounting for 99,000 ounces of silver. For the latter, the US Mint continued to sell only prior year designs.