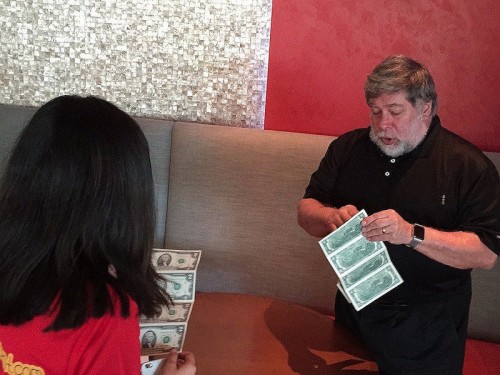 Apple co-founder Steve Wozniak is famous for small idiosyncrasies. One of which is his habit of buying sheets of 2 dollar bills from the Bureau of Printing and Engraving, perforating them himself on a printer and breaking them off two- or three-at-a-time to cover small transactions.

The Numismatic Bibliomania Society shares Woznaik’s explanation of the practice, quoted from his blog: “The sheets come in sizes of 4, 16, and 32 bills each. I buy such sheets of $2 bills. I carry large sheets, folded in my pocket, and sometimes pull out scissors and cut a few off to pay for something in a store. It’s just for comedy, as the $2 bills cost nearly $3 each when purchased on sheets. They cost even more at coin stores.”

So when Woz was interviewed by 14-year-old Sarina Khemchandani for her Web site, ReachAStudent, he brought along some keepsakes only he would think to offer. Business Insider notes that in addition to metal business cards and his favorite cheap “roll up” sunglasses, Wozniak gave Sarina and her brother sheets of 2 dollar bills.

It is unclear whether the sheets bore his custom perforations, which would help to mark the bills as authentic “Wozniak issues,” but Ms. Khemchandani has photographic evidence with which to prove their pedigree, should that ever be necessary. She is probably more happy with the attention the encounter has generated for her charity. 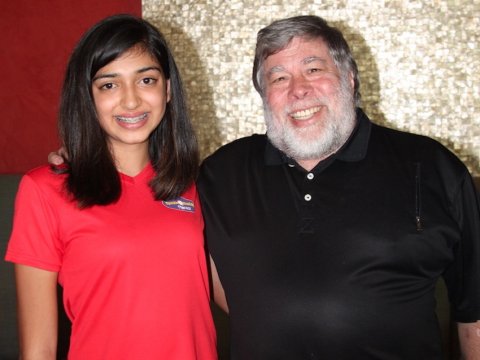 Wozniak talked about his life and dispatched career advice over the course of a 30-minute interview. Regarding his desire to help young people, he said, “Being a mentor is the primary thing I want to do in the world, because mentors were so important, every step of my life.”

Steve Wozniak’s ReachAStudent interview is broken up into three segments; you can watch parts 1, 2, and 3 on YouTube.