The United States Mint reflected on the success of their 50 State Quarter Program in their recently issued 2009 Annual Report. The final coin of the series featuring Hawaii was issued on November 3, 2008, within the first quarter of the US Mint’s last fiscal year. 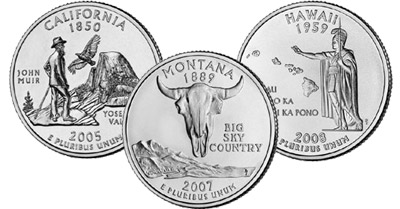 The State Quarters series ran for ten years from 1999 to 2008. During this time, the US Mint issued uniquely designed coins for each of the 50 States, released at a rate of five designs per year. Over the course of the program, there were 34.3 billion State Quarters produced for circulation.

The program yielded substantial financial benefits. The quarters issued for circulation generated $8.6 billion in revenue and $6.3 billion in seigniorage. Seigniorage arises from the difference between the face value of the coins and the cost to produce and distribute them. The US Mint estimated that $4.1 billion of revenue and $3.0 billion in seigniorage represented the incremental benefits of issuing State Quarters rather than standard designs.

The sale of numismatic products related to the State Quarters generated a total of $485.4 million in revenue and $137.7 million in seigniorage and net income. During the program, the US Mint had offered numerous products including State Quarters such as numismatic bags and rolls, proof sets, coin and die sets, collector spoons, and First Day Coin Covers.

Besides meeting financial goals, the 50 State Quarters Program was also intended to increase knowledge of history, geography, and culture of the United States. During the course of the series, more than 6.6 million lesson plans for students and teachers were distributed by the US Mint. More than 3.5 million people participated in the design process for a state quarter, either by submitting design ideas or voting on candidates. The coins were examined and appreciated by the broader public with approximately 147 million Americans collecting the quarters, according to the United States Mint.

The success of the 50 State Quarter Program has led to the creation of other circulating commemorative coin programs. Most recently, this has included the 2009 District of Columbia and United States Territories Program, the 2009 Lincoln Bicentennial One-Cent Coin Program, and the upcoming America the Beautiful Quarters Program.