The United States Mint offered the 50 State Quarters & Euro Coin Collection to capture the moment in history when the twelve original members of the European Union replaced their former national currencies with the Euro. 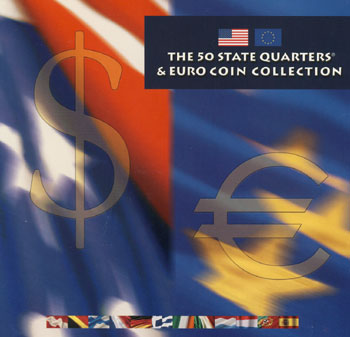 In the announcement of the release of the special United States Mint product, former United States Mint Director Henrietta Holsman Fore said, “2002 will long be remembered as the year the euros replaced twelve sovereign European nation’s national currencies. Unfortunately, many here in the United States have never seen these beautiful new euro coins –until now. Through The 50 State Quarters & Euro Coin Collection, Americans will be able to see and learn about the latest additions to the world’s numismatic family in one educational and comprehensive set.”

Each set included 12 one-euro coins from the original members of the European Union: Austria, Belgium, Finland, France, Germany, Greece, Ireland, Italy, Luxembourg, Netherlands, Portugal, and Spain. The coins were in uncirculated quality with various dates. Also included were the five State Quarters issued in 2002 featuring Tennessee, Ohio, Louisiana, Indiana, and Mississippi. Each of these coins were in uncirculated condition and included the Denver mint mark. 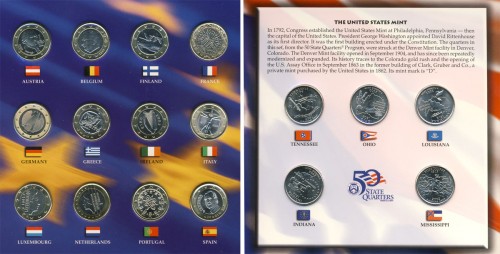 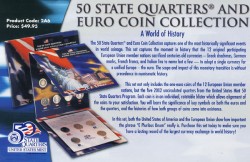 Sales of the special collection officially began on June 12, 2002. Pricing was set at $49.95 with production limited to 100,000 sets. Initially, a household ordering limit of 20 sets was imposed, but the limit was removed a few months into the offering.

The set continued to be available for purchase at the US Mint for the next several years and were eventually sold concurrently with the Legacies of Freedom Set, which included a coin from the Royal British Mint. These two products were promoted together in advertising material sent to some US Mint customers.

Currently, the 50 State Quarters & Euro Coin Collection is widely available on the secondary market. The collection can sometimes be acquired for around the legal tender value of the coins included. Based on today’s rates, 12 euros has a value of $15.78, plus the additional $1.25 in quarters.