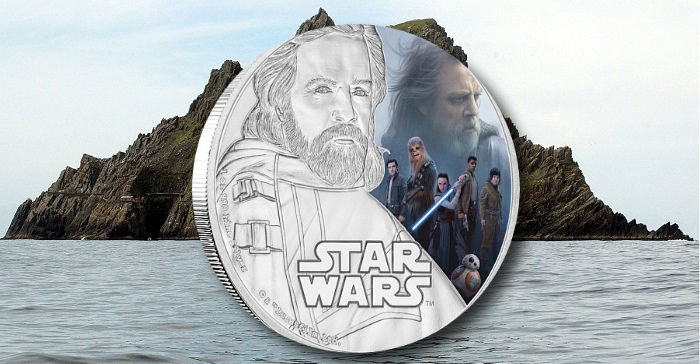 Skellig Michael, a UNESCO World Heritage Site off the coast of Ireland which was filmed as the place of exile for Luke Skywalker in both The Force Awakens and The Last Jedi. Background photo by Maureen.

Last Friday, December 15, 2017, Star Wars: The Last Jedi opened in theaters and scored the second largest opening in sales ever, only to be outdone by the previous installment, The Force Awakens, which was released two years prior. After earning a staggering $450 million in just three days, the film appears to be another box office success. However, it may become one of the most divisive and controversial episodes in the series to date, with critics and Star Wars fans sharply divided in their assessment of the film. Critics gave an overwhelmingly positive review on Rotten Tomatoes of 93%, while the current 107,603 audience reviewers gave it just 56% overall, the latter often citing concerns that the critics may have been “paid off” in exchange for positive reviews. While I am not old enough to have been in theaters when A New Hope came out in 1977, my first foray into Star Wars was still the original trilogy, and, for the record, I am no fan of the prequels. As for my assessment of the film, I tend to side with the critics over other audience members and think it is one of the best Star Wars films to date, and no, I was not paid off for my opinion (rather, I paid the theater to watch it, just like everybody else).

If I were to rank Star Wars: The Last Jedi in comparison to the other films, I would put them in this order (from best to worst): The Empire Strikes Back, Return of the Jedi, A New Hope, The Last Jedi, The Force Awakens, Revenge of the Sith, Rogue One, Attack of the Clones, and the Phantom Menace (followed by the abysmal Star Wars Holiday Special, of course). The reason I would rank it after the original trilogy is because it is still a derivative of the originals; therefore, it would be extremely difficult for any sequel to ever overcome them in terms of creativity and originality. However, that being said, The Last Jedi is far more risqué and bold than The Force Awakens, which, while beautifully shot and acted, was still somewhat of a rehash of A New Hope. Since I risk spoiling the details of the film for those who have not yet seen it if I go on about it any longer, I will instead discuss another interesting Star Wars find from the website of the New Zealand Mint. While the New Zealand Mint features a variety of Star Wars–themed coinage on their website, it appears that the island of Niue has issued three coins specifically designed around characters in The Last Jedi. 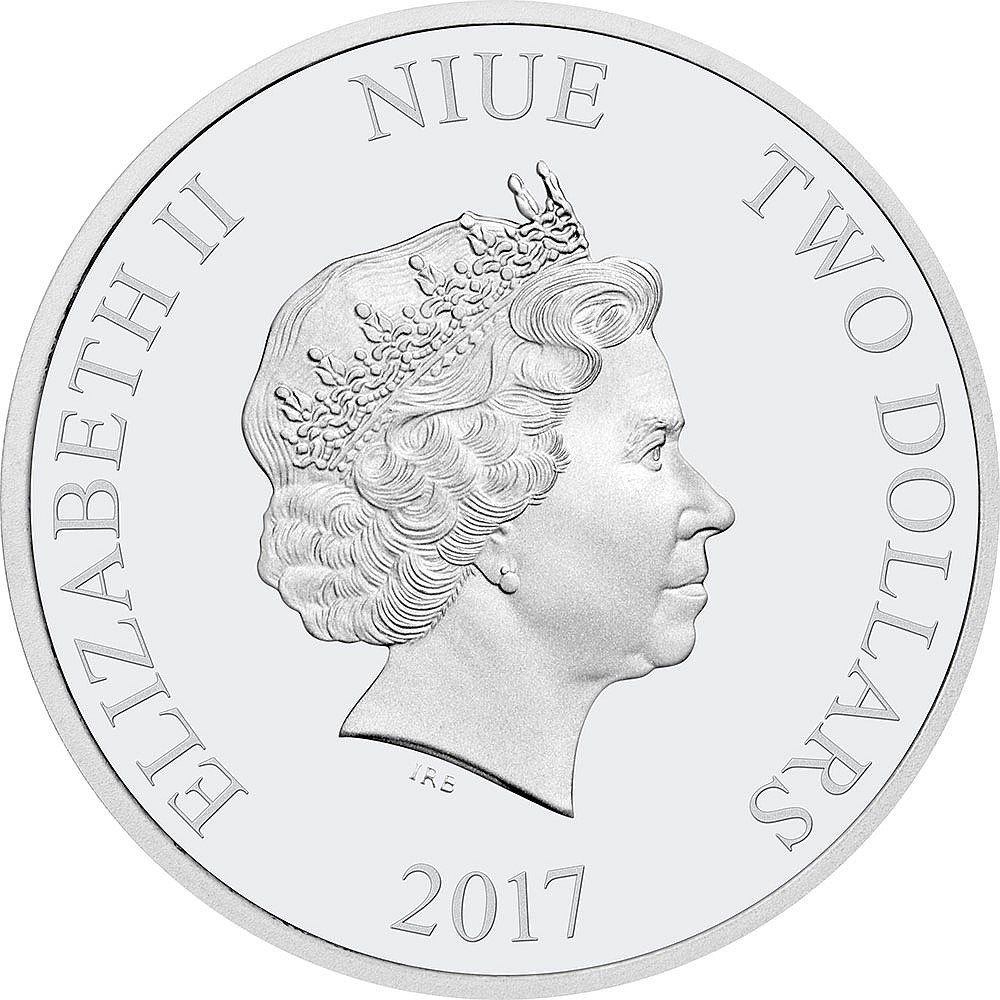 The three Last Jedi coins all come in Proof quality and feature color applications of major characters in the film. Each coin contains one troy ounce of .999 fine silver and possesses a limited mintage of 10,000 units each. While the reverses are different, each coin shares the same obverse, which features the Ian Rank-Broadley effigy of HM Queen Elizabeth II. Inscriptions on the obverse read clockwise from lower left: ELIZABETH II, NIUE, and TWO DOLLARS, with 2017 below.. 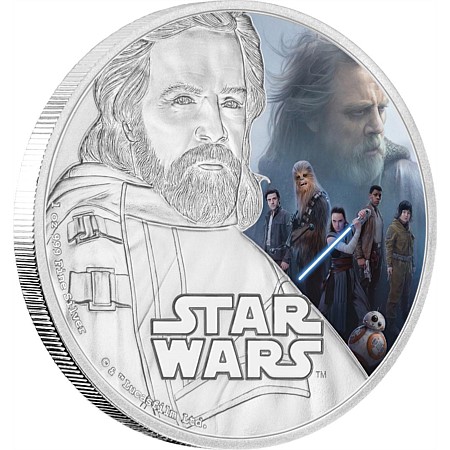 The first coin’s reverse features Luke Skywalker, as he appears in the new film, and he is flanked by Poe Dameron, Chewbacca, Rey, Finn, Rose Tico, and BB-8. STAR WARS is boldly displayed toward the bottom and center portion of the coin, while inscriptions 1 oz 999 Fine Silver and ©& ™ Lucasfilm Ltd. are visible toward the bottom left. 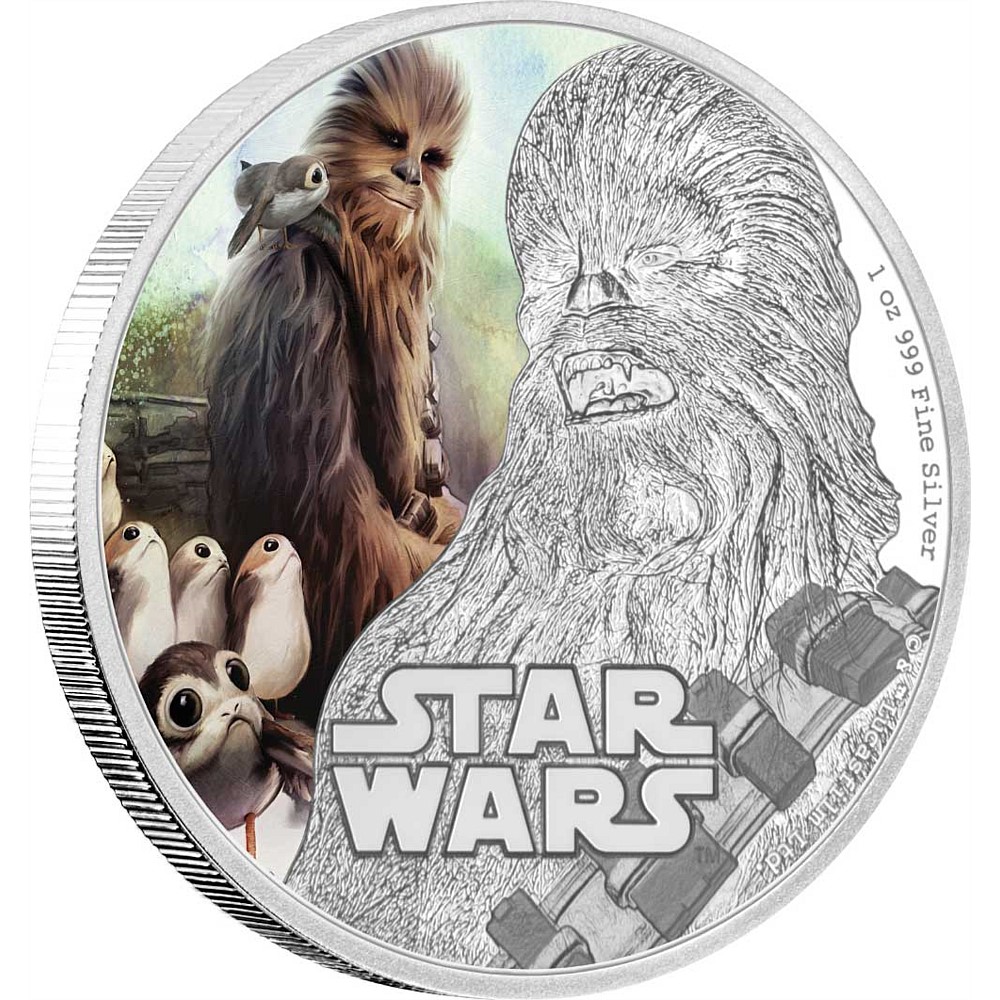 The second coin’s reverse features Chewbacca, who is surrounded by the porgs from the planet Ahch-To, where Luke Skywalker imposed his self-exile. STAR WARS is again displayed toward the bottom and center portion of the coin, with the inscriptions 1 oz 999 Fine Silver and ©& ™ Lucasfilm Ltd. visible on the right-hand side of the coin. 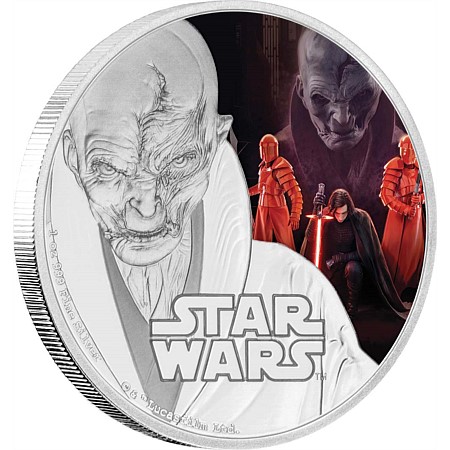 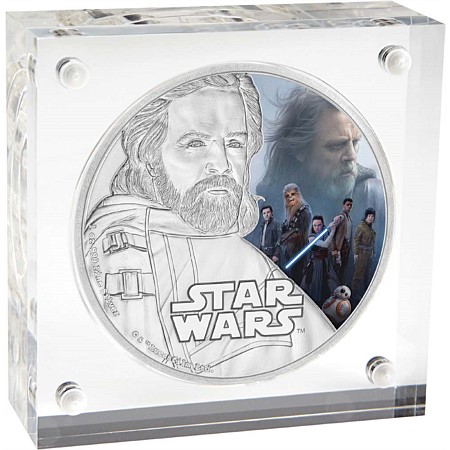 Each Star Wars: The Last Jedi silver coin is delivered in a Perspex coin case and an officially branded Star Wars box. A certificate of authenticity accompanies each order. Whether you are like me and enjoyed Star Wars: The Last Jedi or you just want a quality, limited-edition silver Proof collector coin to add to your collection, Niue’s Last Jedi coins are certain to please. For more information on these Star Wars coins and many others, please visit the website of the New Zealand Mint.